The season continues on schedule and as normal as possible in this difficult year. Reports of helicopter evacuations have slowed to a trickle either because they are not happening or no one is talking. We know for sure the government is mum. Let’s assume there are no new cases and hope for the best.

Slowly a few teams are revealing that they brought rapid test kits and are doing regular testing. Not sure why it was felt important to keep this quiet, perhaps none of our business I suppose. I think it should have been mandated by the government from the start. One bit of good news is a dump of almost nine inches of snow made the Lhotse Face more manageable. Climbing a steep slope on snow is much less stressful than on hard, solid ice.

The Everest area continues to be a busy place with people spread from Lukla to Namache, base camp and the high camps of 1, 2, 3, and the South Col. Everyone is in various stages of preparing for their summit bid that should begin soon. If you think that it is late for the first summits, let look at the last decade or so. As you can see the earliest summits by the rope team and members was May 5, and the latest was May 18 in 2012.

There have been some comments on using helicopters to assist climbers. The conversation was ignited when a chopper flew supplies, mostly ropes, to a high camp on Annapurna last month when the rope team ran out. They had miscalculated the amount of rope needed when they hit unexpectedly tough conditions requiring more rope than planned. In previous years when an event like this occurred, the expedition was canceled but this time over 60 people retreated to several high camps, squeezed together, and waited for the chopper. Oh, and one person used it as a taxi to get to Kathmandu so he could go on to Dhaulagiri!

On Everest this year, helicopters are ferrying ropes to Camp 2 at the base of the Lhotse Face. This has been done several times starting in 2016. At that time Russell Brice, and Expedition Operators Association (EAO), lobbied the Ministry of Tourism to approve using helicopters to ferry gear to Camp 1 in the Western Cwm. No climbers or support staff are helicoptered into the Cwm. Specifically, the gear is limited to only ropes, anchors, and oxygen used by the rope fixing team to get the safety line from Camp 2 to the summit. In the past, this gear was carried on the backs of Sherpas thru the Icefall.

It is estimated the helicopter lift will eliminate 87 loads through the Khumbu Icefall. This is extremely significant as recent temperatures have been higher than usual creating a level of concern about climbing thru the Icefall. Any reduction for the Sherpas who make more carries thru the Icefall than foreigners are welcomed news by most. Most sherpas will go thru the Icefall about 18 times while foreigners will do less than 6 but these numbers are very operator dependent.

Anatoli Boukreev coined the phrase “touch grass before the summit” and by that he meant walking down to one of the lower villages, not flying 🙂 Regardless of the mode, this has become quite famous on both sides of Everest. But this year, this luxury is in doubt. Personally, I wouldn’t leave my “bubble” at base camp. Also, Nepal had banned non-emergency helicopter flights due to COVID, but a few people are in the lower villages. I guess they will have to walk back!

Going lower allows climber’s bodies to enjoy higher oxygen levels above the 50% density found at base camp. Sleeping off the floor, eating different food, rejuvenates many. The flight cost can range from $2,000 to $5,000 depending on the destination – one way – and is usually split among 3 to 5 people. One downside of this strategy is exposure to the bugs, COVID this year, from new people that you have avoided for the last month. It’s a real risk that has stopped a few people from going to the summit.

The virus continues to spread out of control across Nepal. As of today, there are 368,580 total cases with a record 8,000 new ones today. The Kathmandu district reported 3,163 alone. The death toll is 3,529 with 54 fatalities recorded today.

Norwegian Erlend Ness who was the first reported case of COVID at Everest Base Camp has been very open about his story. He has been interviewed countless times by media from all over the world. He writes on his public Facebook page this interesting look behind the scenes:

Happy to be back home in Trondheim after a long travel from Kathmandu, Nepal. Thanks to my friends who were there and met me at arrival

. I arrived last night just 1 day before all international flights are closed in Nepal.

For the past 3 weeks I have been interviewed by TV, radio and newspapers from all over the world. The largest Norwegian media in particular focused on my decision to travel against the Norwegian Government’s advice not to travel abroad now. I told them that this expedition was planned for almost 3 years, I had hundreds of training hours and other preparations. Besides, I had not got back what I had paid for the expedition because no insurance covers. I would not have traveled for any other reason

I also told that we checked the infection situation in Nepal carefully before I went down. Among other things, after a close dialogue with our Sherpas down there. The attached graph from today’s The Guardian shows that at the time we left, it looked like Nepal’s peak was in October 2020, and that it was now heading towards zero. This development was impossible to predict. Also the fact that I were going up in the mountain short time after arriving Kathmandu felt safe.He added this graphic.

Of course, the situation in India compounded the Nepal situation as the board between the counties is porous and India is Nepal’s top trading partner along with China. 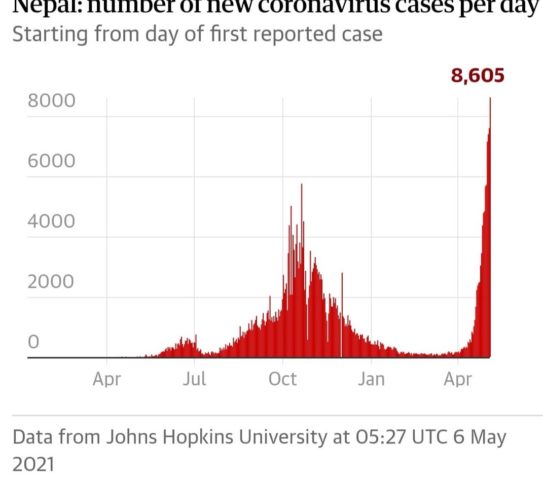 With the weather finally improving climbing has started but not before over 20 people, both clients and Sherpa, have been evacuated from base camp with COVID symptoms. The large Annapurna team hosted by Seven Summits Treks is at base camp and will start their climb soon. Peter Hamor, Horia Colibasanu, and Marius Gane have started their return to the Northwest Ridge where they left off hoping to complete this first. And Topo Mena and Carla Pérez left BC a few days ago and are somewhere above C2. Finally 82-year-old Carlos Soriais still there apparently healthy and will start his bid soon. Won’t surprise me if we see everyone join forces like on Annapurna. Let’s hope they bring enough rope this time.

On a mission to clean base camp, the Nepal Army evacuated three of its soldiers. For spring 2021, 35 (now less with the evacuations) foreign climbers spread across five expeditions will attempt Dhaulagiri plus an equal number of Sherpas. There are six Nepali women there, all of who summited Annapurna last month. Overall there are now between 70 and 80 people on Dhaulagiri.

Not to be forgotten, climbing has begun on Denali, the highest in North America. According to the Denali Mountaineering Blog, one of the best anywhere, there are 785 climbers registered with 26 on the mountain. This is a bit behind the 2019 level. Denali was closed last year.