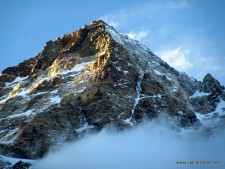 The poor weather in the Karakorum that slowed climbing has eased a bit, allowing teams to work on their acclimatization rotations in earnest.

After a bit of a slow start due to the poor weather, primarily winds and snow, teams are starting to make their acclimatization rotations. If they are climbing without supplemental oxygen, then most climbers will want to tag 8,000-meters on their peak before returning to rest and wait for the weather window. However, these days, the commercial teams are starting to use supplemental oxygen much lower and at higher flow rates thus are keeping their rotations to as little as one.

There was a large amount of snow over the past two weeks but teams have let it settle. However, I remain concerned about avalanche danger, especially on Broad Peak.

Unfortunately, the new 4G cell tower recently installed in Concordia is down, preventing a lot of information from K2, Broad Peak, and the Gashbrums. However, the good news is that the weather continues to look good for the next few days.

Lot’s climbers but no Crowds … yet

K2 is crowded but not as bad in the past few years. American Garett Madison of Madison Mountaineering texted me from C1 on K2 that “Not very crowded yet. I counted about 80 climbers total for K2, including all Pakistani as well.”

He has nine climbers (USA, UK & Ukrain), 10 Nepal Sherpas, 4 Pakistani high altitude porters, and 10 Pakistani base camp staff. They are currently at Camp 1 to spend two nights before moving to Camp 2 for two additional nights, then returning to Base Camp. It will be interesting to see if they call it good for acclimatization and wait for a good window for a summit bid.

Pioneer Adventure is supporting the Ukraine team Alpomania. They have fixed the ropes to Camp 3 on K2 through the Black Pyramid with “some other Sherpas” whom they choose not to name. The largest team with Sherpas is from Madison Mountaineering. It’s a shame not to be more transparent about working together. They posted:

Today at around 3 pm our following Sherpa Guides have successfully opened the route till Camp 3:

The route till camp 2 was open by the Pakistani team. As informed by Mr. Lakpa Sherpa. Hopefully, the weather will favorable, and all our team will successfully and safely reach the summit!

Madison had posted a few days ago:

We will head up to ABC on our 1st rotation tomorrow and plan to climb to Camps 1 & 2, spending two nights in each camp. The weather looks good, and everyone is doing well. Our Sherpas are also heading up to work on fixing the route.

Karakorum Expeditions team had fixed the ropes to C2 previously, so it appears everyone is working well together.

There are no recent updates from Pakistani operator Karakorum Expeditions or Sajid Ali Sadpara. Teams went the Northern Terrorties assuming the 4G service would work, so now that it’s down, it appears some didn’t bring their reliable Thuraya IP modem other than Marco, so there will be a void in updates, just like the old days!

There are no updates from American Graham Zimmerman with Candian Ian Welsted on their K2 West Ridge attempt. The last word was that they had established a different base camp from the rest of the K2 teams.

Marco Confortola, along with fellow Italian Mario Vielmo with Pakistanis Hassan Jan and Fida Ashur, are on GI. Marco posted on IG:

At 2.00 local time I will start the climb towards C2. I will join Mario Vielmo who during the day positioned himself at C1 to complete his acclimatization. Weather permitting the following day we will try to push up to C3. We should be about 7 climbers who will try to track in rotation. In the meantime, other expeditions are moving well on Gasherbrum 2.

Joining them on GII is the Beskid Expedition Team with this update:

Transitioning Banana Ridge in these conditions was quite a challenge. We went hard with 2 tents and food for a few days, time 4.30 + 45 min access.

No updates from the Spanish team led by Manuel Gonzalez on Naga this summer with Enrique Osiel, Iñigo Delgado, Sergio Carrascoso, and Carlos Santafe. They intend to repeat Reinhold Messner climb of the Diamir Face.