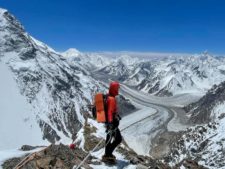 We had the first 8000er summit over the weekend plus the K2 West Ridge duo are making excellent progress. The route is fixed to C3 on K2’s Abruzzi route. I anticipate K2 summits starting soon. Very early but the weather may still play a few tricks.

Well, we have our first 8000er summit the season over on GII. And a bit of a surprise with a flight off Broad Peak from 6700-meters using a paraglider. Many climbers have now reached 7,000-meters and probably feel ready for the summit push assuming they use supplemental oxygen. The winds appear to be low enough for the next week so I expect some serious attempts soon.

Mind you, this is only mid-July and most K2 summits take place in late July so we are two weeks ahead of the usual schedule. But if a window appears, the climbers will jump through it, calendar be damned! That said, one thing about the Karakorum and especially K2 is that the weather can be quite volatile so don’t be surprised to see plans gone awry with a spat of high winds.

Thanks for the update Alan. The weather looks good for tomorrow, changes start on the 12th and from the 13th wind blows out of limits for quite a few days. Just in time for my team to return from their first rotation. Good timing!

For several climbers and guides, this is their first time in Pakistan and on K2 or Broad or the G’s. They are blown away by the scale and beauty of this area. I agree. The first time I saw the Karakorum in 2007, I was shocked at the raw beauty, jagged summits, and power of the area. Not to mention the kind people of the Northern Territories.

Good news on the new 4G cell tower recently installed in Concordia it’s back up and I’m receiving messages from climbers as high as C2 on K2!

The Pioneer Adventure Sherpas supporting the Ukraine team Alpomania continue to make good progress. They posted, “All our K2 members have well acclimatized till 7000m and are safely back to Base Camp.”

Garrett Madison posted his team spent two nights at C1 and another two at C2 and are now back in Base Camp pondering their next move. Using Madison’s logistics is Brit guide Jon Gupta. This is his first time in Pakistan much less on K2 and he is totally gobsmacked: 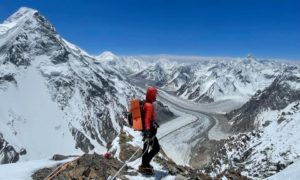 For the past 5 nights we’ve been up on the mountain acclimatising. We spent nights at ABC, Camp 1 and Camp 2 at 6790m.Here are my thoughts and musings on K2 – the savage mountain.

K2 oozes character – it’s big, omnipresent and full of personality. Inconceivably steep from every angle it stands proud like a fortress enticing you cautiously onto its slopes. Commanding its own rules, K2’s weather has no boundaries. The regular afternoon storm clouds wrap themselves tightly around the impenetrable rock and ice bands high on the mountain and the noise of huge avalanches crash down the slopes above us.

There is no rest-bite on the Abbruzi Spur, no time to switch off or unclip from the lines. It is quite simply steep. Everywhere. Our tents are perched precariously on the only vaguely habitable snow slope in over 1000m of vertical. From time to time K2 pokes out from the clouds showing off a glimpse of its proud triangular summit. So close, yet so unfathomably far away. Yet today, under a calm deep blue sky, K2 welcomed us with grace and warmth. Feeling at peace and entirely alone we climbed silently up through the ever steepening rock and ice, pinched ourselves that we were fortunate enough to experience these magical moments.

The Karakoram feels different to anywhere I’ve known. Its vast like the deepest oceans yet so complete like a sky full of stars. The silence resonates perfectly across the striking mountains that pierce the skyline in every direction. As far as I can see, most unclimbed.
Tomorrow we descend and rest enjoying the luxuries of Basecamp, being warmly looked after by Pakistan Basecamp crew. Proud of their work and never shy of a smile these guys keep the cogs going round.

Of note, Jon is with a client with an ambitious goal of seven 8000-meter peaks in one year. This is the video of their last steps on Everest in May.

Karakorum Expeditions‘ team said the fixed ropes reached C3 on K2. Sajid Ali Sadpara‘s home team gave this brief update: “As per GPS trackers; the team has reached Japanese C-3 at a height of 6967m. Weather is super clear and everyone is well.” Their plan to search for his father is vague.

American Graham Zimmerman with Candian Ian Welsted on their K2 West Ridge attempt. Graham messaged me this update: “Hey Alan! We’ve acclimatized to 7k on broad peak and things are looking good! We’re having fun out here and loving these huge hills :)”

The French team of Boris Langenstein, Tiphaine Duperier, Aurélia Lanoe, and Guillaume Pierre summited and skied down to Camp 1.

The Spanish team led by Manuel Gonzalez of Enrique Osiel, Iñigo Delgado, Sergio Carrascoso, and Carlos Santafe on Nanga poisted a video update showing progress. It’s difficult to determine how high they have reached. They intend to repeat Reinhold Messner’s climb of the Diamir Face. UPDATE: They cancelled the expedition due to weather and slow progress after reaching C1 at 5500-meters

Karakorum Expeditions reports the ropes are fixed to C3. They suggest they might summit on July 16.

Also, one of their Western guides, Stephan Keck, apparently Paraglided off Broad from 6600-meters!

Probably one of the best flying days of my life. Start on the way to camp 3 Broad Peak at 6600m. Maximum flying altitude 7400m. It is an amazing feeling to be able to fly in front of this scenes, face 2 face with K2. Thankful for days like this. We didn’t expect that at this stage of our project. It looks like we’re working perfectly as a team. Based on this experience, material and technology can be adapted and perfected over the course of the year. Thanks to Hannes for the perfect #phiparagliders equipment. Thanks @mikekuengmk , that was the perfect start for Project: Addicted 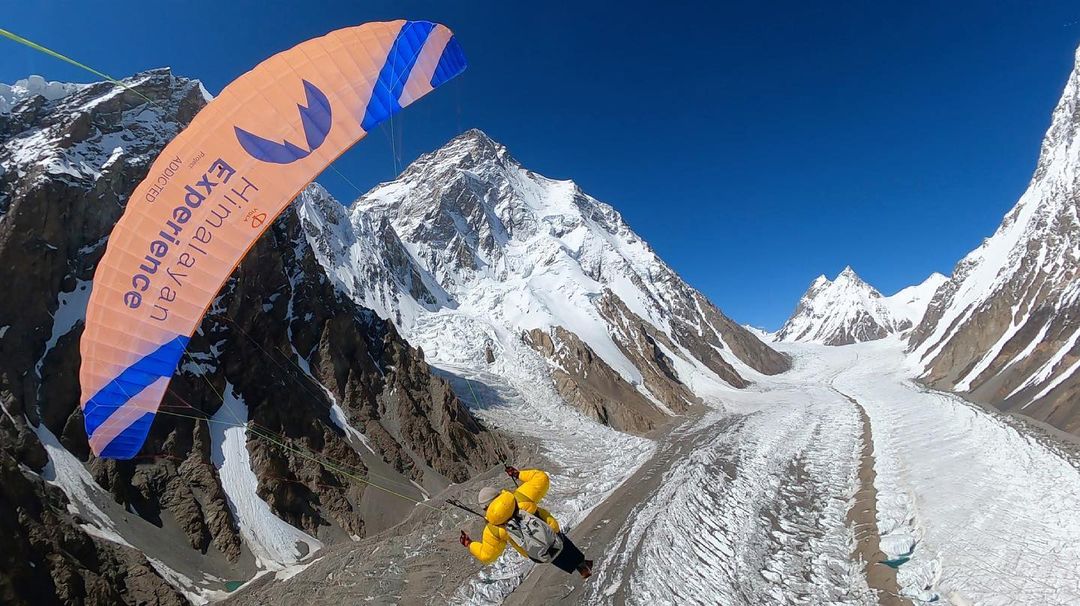 Video Version of This Blog