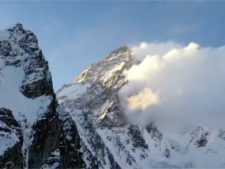 Climbing continues on both K2, Broad Peak, and Gasherbrum II. Teams hope to catch this narrow weather window for Broad Peak and GII but later in the month for K2. Heavy snow has been reported across the Karakorum. I remain concerned for avalanche danger on all peaks, all routes. Summits are anticipated this weekend.

The weather was tough the last few days with high winds and some snow. Now it appears to be letting up and those on Broad Peak will take advantage of the narrow window for a run to the top. Winds are expected to return on Monday, July 19th, and not let up until late in the last week of July.

Ukraine climber Irina Galay posted this video showing how the westerly winds wrap around K2. The source of the video is unclear, probably a drone, but it’s representative of how the winds hit K2. In my video interview with Garrett Madison a few days ago he spoke of how it wraps around the summit spreading the snow everywhere. He hopes the high winds will remove some of the fresh new snow.

Marc De Keyser told me he sent this advice to his teams in the Karakorum this summer a couple of days ago:

“Summit Windows: 16th-17th-18th of July: promising. Good atmospheric conditions and wind moves into safety limits on the 16th of July and stays in limits on the 17th and 18th of July (15-20kt average.) – from the 19th of July wind increases again and rapidly becoming solidly overcast: deteriorating so summiting is not advised.”

A team of 8 Sherpa have left from Base Camp and headed for Camp IV. If the weather is favorable they will try to open the route and fix rope till Camp IV by tomorrow.

Madison Mountaineering reports in they are also fixing:

Our sherpas are up on K2 on the Abruzzi Route finishing some load carries to Camp 3 and Camp 4 and some rope fixing as well and getting Camp 4 all stocked up with our equipment for our summit push which we hope do some time in late July. It looks like after the next couple of days of good weather there will be some snow, a lot of snow actually, and some high winds for a few days.  So we are gonna let that storm system pass through and then hopefully by around July 24th we’ll have another patch of good weather enough to make a plan for a summit attempt.

Sajidali Sadpara who is with a small team looking for his father who disappeared last winter said:

It is different kind of feeling to be back in mountains specially the K2 .After four and half months I back in mountains .feeling amazing while my first climbing day .It was our first rotation and we spended two nights in C1 and two nights in C2 and we climbed up to japanese C3. We are climbing again and will resume retracing the higher slopes above The Shoulder. We will sleep at C-2 today, and will hit C-4 by tmrw. Weather is clear for 2-3 days and everyone’s in high spirit for the search.

American Graham Zimmerman with Candian Ian Welsted on their K2 West Ridge attempt. Graham posted on IG a couple of days ago just before the last storm hit.:

Acclimatizing in preparation for making alpine style attempts on the West Ridge has required lots of patience. It has also involved spending lots of time looking at stunning mountains, which is nice. Now it’s storming hard and we’re drinking hot drinks in basecamp. All is well.

Karakorum Expeditions‘ team said the fixed ropes reached C3 on K2. They gave this update suggesting everyone was working well together on the mountain:

@karakorumexpeditions rope fixing team arrived at camp 3 around 11 am, the Korean team also arrived at camp 3, we have a seven-member rope fixing team, there will be four members from Korean team to join our team to fox ropes to the summit. Many other teams are going to camp 3, we will see what is their plan, either they will follow our team track and use our rope or will assist in rope fixing! We have brought up 1000meters of rope and the Koreans have 400meters of rope. We will try to fox the rope to the summit!
While our clients are resting at camp 2, tomorrow morning will arrive at camp 3 and then in the evening continue to the summit,a total of 8 clients and 13 local high altitude staff/guides and two IFMG. At the moment, #karakorumexpeditions has 30 members including, foreign client’s, ifmg, local high altitudes guides and a rope fixing team. The rope fixing team will give a chance to independent climbers to open the route till the V today if they are willing to work if they don’t, our team will start the rope fixing tonight at 11 PM and try to reach the summit tomorrow depending on the snow conditions! Stay tuned for more and pray for our success insha’Allah

We are at C2! The weather is very good, and we are strong, focused and motivated. Now it’s time to rest, recover well and tomorrow for C3. The Banana Ridge was a bit “spicy” so we’ve enjoyed it. If everything remains the same, on Sunday 18 around 8am BCN time we will be reaching the summit at the GII, what nerves and what you win!