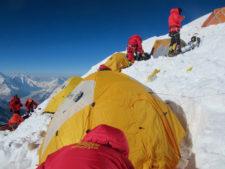 K2 continues to live up to its reputation by taking another life, this time on a new route. Meanwhile, teams are making progress on the Abruzzi but some climbers feel the lack of support and organization make this summer too dangerous and have thrown in the towel. Those remaining continue to target July 27th and 28th for their summit.

Highly respected and experienced Scottish legend Rick Allen, 68, died in an avalanche while attempting a new route on K2’s Southeast Face. He was with experienced and strong teammates Austrian Stephan Keck and Spaniard Jordi Tosas. Both Keck and Tosas have been evacuated by the Pakistani military.

Mr. Allen made mountaineering history throughout his career. In 2012, followers watched in awe as he and teammate Sandy Allan spent over a week on Nanga Parbat’s long, exposed skyline of the Mazeno Ridge. In 2018 while on nearby Broad Peak, he lost his way in difficult conditions only to be spotted by a drone and rescued.

Dear friends and family we are devastated to announce that our very dear friend and Legendary Scottish Climber Rick Allen died in an unfortunate avalanche while attempting a New route alpine style on the southeast face of K2 with #JordiTosas and Stephan Keck. Rick has been an international and strong climber throughout his life! We had the honour to serve him on his expeditions with us! We at #karakorumexpeditions Extend our heartfelt condolences to the family and friends of Rick!

Stephan and Jordi are fine, army aviation helicopters are undertaking the rescue mission, Stephan and Jordi have been brought down from the mountain via longline, to base camp. Our sincere thank you to #Globalrescue for their very prompt action in rescuing Jordi and Stephan! Rest in peace, Rick!

With Rick Allen’s death, the summer Karakorm toll rises to two along with Mr. Kim Hong-bin on Broad Peak last week. Similar to last winter, we are seeing some of the world’s most experienced climbers die on these big peaks.

Seasoned climbers are always seeking a new challenge thus are willing to take more risks than less experienced ones on commercial teams. Guides, always mindful of these risks, will rarely drift off their proven formula. So it was in this spirit, we saw climbers on the West Ridge, Southeast Face, and the standard Abruzzi route this weekend.

Avalanche danger is always a risk on most mountains, especially after a heavy snowfall, as K2 saw last week. The standard protocol is to let the snow settle for 24, 36, or 48 hours after a heavy dump. The hope for bright direct sunlight will cause the new snow to bond to the existing base making for a more stable structure. Even then, the danger still exists. Most avalanches are caused by human activity.

I occasionally get the question of why climbers don’t use explosives to force avalanches similar to ski resorts. Well, there are many, many problems with this approach, the least of which is that K2 and the peaks in Pakistan’s Northern Territories are in what is called the “LIne of Control” or Disputed Terrorities with India. In other words, it’s about as active of a war zone as you can get without a formal declaration of war.

The area is so sensitive that only Pakistani military helicopters can fly in the area, including search and rescue. And they fly in pairs. This protocol is dramatically different than in Nepal, where private companies fly helicopters alone all the time for whatever reason. A flight from Everest Base Camp to Kathmandu may cost $5,000, whereas, in Pakistan, it might cost $30,000 to fly from K2 Base Camp to Skardu.

In addition to these factors, many peaks are in National Parks or otherwise protected areas, so setting off an explosion is prohibited. And finally, plus obviously, it is unlikely anyone would carry bombs on a mountain climbing expedition!

With the deadly avalanche that took Rick Allen, my concern is magnified about the snow depth on the upper mountain and the crevasse that created issues for the winter team just a few months ago. We will know more once teams reach the High Camp and begin their push.

Pioneer Adventure gave this update after reaching C4. They are targeting July 27 for the summit:

Mr. Sanu Sherpa along with his fellow Guide have safely reached Camp 4. Mr. Lakpa Sherpa and Mr. Mingma Dorchi Sherpa leading their respective clients will be reaching Camp 3. Hopefully the weather will remain favorable and our teams will safely and successfully make it the summit and back!

Garrett Madison of Madison Mountaineering sent me this text from Camp 2 on the Abruzzi. They are targeting July 28 for the summit:

Thanks Alan! Up at camp 2 now with our team, planning to head to camp 3 tomorrow. Beautiful weather! Will see how our Sherpas do tomorrow with the rope fixing above camp 4.

Kenton Cool noted that their tents (using Madison logistics) have some damage similar to other teams on the route. C2 is notorious for wind damage

We were all pleasantly surprised by the state of the tents at C1 when we arrived yesterday. However this was not the case at C2 where there winds have torn the tents apart.

Oswald Rodrigo Pereira made this note regarding the conditions high on K2 after ending his effort:

This is K2. And this is it. My expedition is over. At least the climbing part. After the Broad Peak summit, I felt like a superhuman. Strong and motivated. I felt K2 was waiting. And I wanted to summit both of them within 10 days.

Usually, I would let my ambition and my internal power drive me. But this time I feel that’s it. I had my dose of success but also luck. I saw happiness and suffering. K2 gave me a sign: my whole deposit in Camp2 was blown away (sleeping bag, gas, food, clothes and etc.) as well as my tent is destroyed. I learnt how to read signs and this one is telling me K2 will wait for another one.

Jon Gupta sent out the link to his tracker. His last location at C2 was reported as 6678-meters. The normal locations for the camps on K2 are:

Karakorum Expeditions‘ team are also on their push and gave this update today before Rick Allen’s death:

#karakorumexpeditions #K2 summit push underway! @boldbravebeautifullife and her team arrived at camp 2, @saminabaigofficial and some other clients are at camp 1, #fotis attempting #broadpeak #Jordi #stephankeck and Rick Allen are attempting a new route on K2 south-east face!

Due to storms and high winds our tents at camp 1, camp 2 and 3 are destroyed, we have re-established new tents at C1, C2 and hope tomorrow at c3 . Hope all goes well. Please do keep the entire team in your prayers

However, I’m getting reports directly from climbers on the mountain that some are ending their effort citing lack of sufficient support to summit “… there is not one porter that is healthy enough too [summit]. And there has been enough tragedy on the mountain this year.”

The climber, boldbravebeautifullife posted on IG about the uncertainty of the expedition: ⠀⠀⠀⠀⠀⠀⠀⠀⠀

We’re waiting to see how the team and guides will break down our second K2 summit push. There is currently not enough room for all of us at the various upper camps, so we need to break up into a few groups and go at different times to keep the mountain from being too crowded. I’ll check back in when I can but wanted to share the latest with all of you.

The small team from Hushe welfare mountaineering and climbing school reported in from C3:

The West Ridge team of Graham Zimmerman and Ian Welsted have not updated in a few days but I fully expect them to be climbing during this window.

Sajid Ali Sadpara who is searching for his father and two teammates who went missing this past winter has resumed climbing during this window. Their tracker showed them at C1. They will probably return to Camp 4 and the Bottleneck to continue the search. On a personal note, I hope he finds his father, Ali Sadpara, and teammates Icelander, John Snorri, and Chilean, Juan Pablo Mohr Prieto.

Pakistani climbers are having a good season climbing for themselves. Delawar Sadpara from Skardu summited GII. Back on July 18th, Team Pakistan also summited GII. Their team included:

A few moments ago Marco informed that they have reached C3. The climb was not easy due to the amount of snow they had to track down. Tomorrow they intend to position C4 which they will position more or less between 7,400 and 7,500 to start the summit attempt in the evening.

It appears some of the climbers who didn’t make it to the true summit in the last push will try again this Sunday, July 25, 2021.

Asif Bharti, and Sa’ad Mohamed with their Project Thin Air are hoping to summit soon. They want to climb with no HAP support or Os. Also, the Death Zone Freeride team of @vitaly_lazo, @thomaselone, and @apuqovkin will make a second attempt after becoming involved in the rescue of climbers on Board last week.

The Death Zone Freeride team is striking out at critics of the rescue attempt for Mr. Kim Hong-bin. You can read the exchanges on their IG and FB accounts.

In an attempt to locate the body of Kim, a Pakistani military helicopter hoped to scout the area on the Chinese side of Broad Peak – an unprecedented move allowed by the Chinese. However:

This morning, an overflight of the supposed fall zone of Mr. Kim was made. Unfortunately, the pilots did not manage to get to the place — after two hours of flight they returned to the base. @vitaly_lazo has already set out on the route to catch up with his comrades and make a second attempt of Broad Peak ascend during the weather window