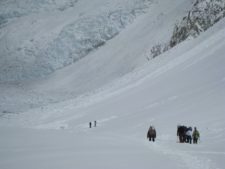 The Western Cwm is known as the valley of silence. But it could be called a microwave oven. The icy walls that define the valley reflect the harsh rays of the sun creating an almost unbearable environment. But just when it gets too hot, it gets too cold.

Afternoons at Camp 1 are notoriously hot. At almost 20,000-feet, there is no shade, and the intense sunlight reflects off the ice and snow-covered faces of Nuptse, Lhotse, and Everest’s West Shoulder. There is no escape when there are no clouds.

Buddies had already taken their sleeping bags and laid them on top of the tent. This maneuver reduced the inside temperature by at least 15 degrees Fahrenheit, now it was only 85F. They stripped down to their briefs, seeking any form of comfort in the sweat lodge. No one cared.

Having a tent to herself, She also was down to the essentials. It seemed the Western Cwm had become a beach in the South of France, or Brazil. She thought about calling home on her Thuraya satellite phone. It costs about $1 a minute. With the tents so close together, everyone would hear her conversation so She decided to wait until they got to C2 the day after tomorrow when She could escape somewhere for privacy. She desperately missed her kids and husband. Lying back on the sweaty sleeping pad, she closed her eyes and thought of her family.

Mingma walked past the tents one by one, collecting empty water bottles. He returned after a while with each one full. “Sppptttttt!” Dutch coughed up a gulp as he tried the new water. It was warm, almost hot. “Well, I guess to melt snow, you have to get the water warm.” He defended his reaction plus supported the Climbing Sherpas.

They spent an uncomfortable afternoon sweating, rolling over and over on a sticky sleeping pad, searching for that position to maximize comfort while minimizing contact. They never found the perfect combination.

Just as they settled into a rhythm to get through the afternoon, a loud crashing sound brought everyone from their tents like a prairie dog colony out of their burrows. An avalanche off of Nuptse. It was far away so as not to be a threat, but a stark reminder of where they would sleep tonight.

They forced down a freeze-dried meal of noodles and some unidentified meat by-product and prepared for the next phase, freezing. As the sun set behind Pumori, the winds picked up. Thermals. The temperature dropped 40 degrees in a matter of minutes. “Hell, it’s cold,” Old Man cursed at Snorer. In the next tent over, Dutch looked at Loner and laughed. Loner zipped his down jacket tighter.

The first night at altitude is tough for almost every Everest climber. Tonight would be their first true test, and they would suffer. Buddies had retrieved their sleeping bags from the top of their tent and placed them where they should be, on top of a Z-Pad then on an insulated thin air mattress. This combination worked surprisingly well to ward off the invading cold from the snow-covered ground.

Also, everyone had either a -20F or -40F down sleeping bag, a modified mummy with an extra-large toe box, so they could comfortably store their boot liners each night. This technique kept them warm and allowed for a more comfortable start the next morning.

She took inventory before crawling into her bag: water bottle, headlamp, snack, pee funnel, and bottle – they were all there. She grabbed her water bottle, still warm and put it at the bottom of her bag, toes on top, to tease out the last bit of warmth that had annoyed Dutch earlier.

Snorer began a debate with himself on what to wear in the sleeping bag. Taking off his softshell pants made sense but not the down jacket. But, he bought a -40F bag for a reason, so go with it. Quickly he made the decision to strip down to only long underwear, but he put on his dedicated “sleeping socks” since his toes got cold at night. No gloves, but the knit cap for sure. He started laughing at his level of indecision. Old Man was already asleep.

Snorer wasn’t quite ready, so he put his headlamp on to read for a few minutes. It was cold. He could see his breath as he exhaled. Holding the book above his head, his hands got cold, so on with the gloves. He read a paragraph and put the book down. Now on his side, he began to relax.

It didn’t take long until their body heat created a snug cocoon for the Couple. Lying in their individual bags, they still snuggled together. They closed their eyes, their minds wandered. As they were about to fall asleep, Snorer announced that he was now asleep as a freight train announces it is speeding past an intersection. Then one of Buddies coughed. It was deep, hard, and sustained. This has been going on for a few days, but he seemed to doing well despite it. The Couple looked at one another, kissed and said goodnight.

As the camp quieted, another gust of wind swept across the Western Cwm. This one was so strong that tiny ice pellets punched through the thin nylon tent wall. And another gust hit. The sharp ice hit their faces; they retreated like turtles into their bags for protection. The tent was beginning to heave like a dragon’s spiny sides. They moved closer together in the middle of the shelter.

Boyfriend, now with his eyes wide open, stared at the tent walls. Wondering. Glancing at his watch, his heart sank. 8:36 pm. Another gust, another brush on the face. The pattern continued. But somehow, with all the noise, he fell asleep for a moment but awoke to the sound of loud gasps. He leaned over to check on Girlfriend. She was fast asleep, but he was sure the gasp came from her.

She sat-up suddenly. “Oh my God, was I snoring?” Girlfriend asked in embarrassment. “No, you were experiencing Cheyne-Stokes breathing. It’s OK, try to go back to sleep.”

They knew about this but were still not prepared. The simple explanation is that you stop breathing due to a lack of oxygen at this altitude. Your body notices and wakes you up with a gasp to remind you to breathe.

He looked at your watch. 9:02 pm, they had been in their bags for two hours, only nine more to go until they wake to begin the active rest day at Camp 1.

And the night goes on.