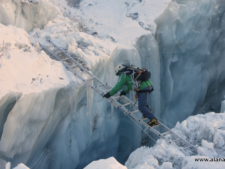 The first trip into the Khumbu Icefall can be shocking. It starts steeper than thought, has more ups and downs than advertised and when you see that first ladder, second thoughts are common.

“Try to keep it down tonight. We need our sleep,” She and Dutch asked Snorer. “Yeah, I’ll do my best, but can’t really control it.” He sneered. “We may have to move his tent,” Dutch said.

Inside their tents, they packed for the short trip into the Khumbu Icefall. They planned to leave at four tomorrow morning. Boots were parked outside in the vestibule. Liners would go inside the sleeping bag to keep them warm. They didn’t need very much for this trip: water bottle, a few snacks, extra layers.

They would be wearing most of the gear: base layers, climbing pants, shirt, gloves, hat, sunglasses around their neck. They would start in a medium weight down jacket but have their Gortex Shell in the pack along with mittens.

As She got ready to crawl in her -20 down sleeping bag, She reached for the picture album. She turned each page slowly, looking at their eyes, their smiles, their expressions. God, She missed her family, and She had only been gone for a little over two weeks. She fluffed her pillow, put in the earplugs, and pulled the knit cap over them hoping that would help. “Goodnight, boys,” She called out.

She set her alarm for 3:00 am, knowing it was unnecessary, just hoping to get a couple of hours of rest. The Khumbu Icefall. She had seen so many pictures, a few videos, and recently studied it from Kala Patar, and her base camp tent, but now it was time for the real thing.

Switching on her headlamp, She pulled on her climbing clothes. This was just a trip halfway up, but it still required warm layers, and technical gear – crampons, harness, jumar, cows tail, ice axe – the works. The 3-person tent seemed big when She arrived but now felt like a closet as She swung her legs off the mattress to pull on her pants. Her arms hit the sides as She wiggled into her top. Next came the warm boot liners. She was glad She had kept them in her sleeping bag overnight. Scooting to the door, She pulled on her outer boots.

Finally, dressed for action, She stumbled outside her tent only to trip over a line. Laughing, She said,” And I’m going to climb Everest?” Standing in the cold, crisp air, She paused. Looking around, She saw her teammates performing the same circus act.
Looking at her red 8000-meter boots, the contrast against the white snow was vibrant. Without thinking, a smile grew on her face. She was about to enter the Icefall.

Glancing at the Icefall, She could see headlamps, “Um, someone was already up there. Probably Sherpas carrying a load to Camp 1 or Camp 2.” She told herself. She could hear the low hiss of stoves as the cooks were already making breakfast. The Sherpas, gathered by the cook tent, were eating an unidentifiable concoction of rice, milk, and sugar. They ate with the enthusiasm of a starving teenager.

As She walked over and entered the dining tent, the cooks had already brought out toast and a boiled egg for each climber. She spread some jam on her toast and stared at the egg. Snorer pushed some coffee her way. A grunt was all She could muster.
Without warning, the Personal Climbing Sherpas entered the tent calling out names. Not sure if She was being recognized or punished, She stood up quickly and followed Mingma. He set a brisk pace through the maze of paths in base camp. Switching on her headlamp, She followed closely, still unsure of the correct turns to make. Crampon Point was their destination.

With the finesse of a lightweight boxer, Mingma weaved between the tents. He dodged a yak standing on the trail, careful not to touch the sleeping beast. After 20 minutes, they reached the perimeter of base camp and took a step onto a flattish section of the Icefall. She was here a few days ago to run through her gear on the obstacle course, but this time it was for real.

The route became circuitous, up and down small ice hills, stepping over small sections of running water, maneuvering around growing ponds. Careful not to get her boots wet, She took as big of steps as She could. Mingma seemingly floated over them.
Her breathing increased—tiny drops of sweat formed on her forehead. The doubts returned. “Oh my God, if I’m struggling just to get to Crampon Point, what will …” She stopped herself remembering the value of mental toughness.

She and Mingma arrived at Crampon Point with the energy of a Formula race car coming into the pit for a tire change. Taking her crampons out of her pack, She sat on it to attach the spikes to her oversize boots. Right, then left; thread the safety strap around her ankle and through the ring; double back the strap. Mingma inspected her work. Feeling like a child, She also looked to make sure She put them on the correct foot; buckles go to the outside for safety. She looked for Mingma, but he had already moved on.

The first few steps into the Icefall proper were steep. “Who put the route over a 30-foot ice bump at the start?” She said to herself. Her breathing picked back up. Mingma’s headlamp seemed like a searchlight, not looking ahead but side to side using the eyes in the back of his head to see if She was keeping up. He slowed down a bit.

Reaching the beginning of the fixed-line, She took the carabiner attached to a piece of webbing fixed to her harness and clipped-in. She’d repeat this motion several hundred times over the next few weeks. Seeing more people ahead, She silently hoped they would slow down her Super Sherpa.

Moving steadily, they gained altitude in the Icefall. The wee hours of the morning were cold. It was dark; there was no moon tonight. Maybe for summit night? The Sherpas often say a full moon is an auspicious sign. Headlamps showed the way, but so did the line of climbers ahead, and the thin white nylon line—another part of climbing Everest that She would get to know well.

Soon the conga line came to a halt. Actually, it was just She and Mingma because he has no patience for slow climbers, and he passed each of them pulling her along in his slipstream. They were the first of Mount Everest Guides to this point. At the fast pace, She struggled to breathe, but She knew this was a good sign as they would reach the summit and not let anyone or anything slow them down.

Looking ahead, the emerging sunlight revealed the reason for the sudden stop – a ladder. A ladder? A ladder! Suddenly her mind became focused, no more idle thoughts, no more complaining, no more breathing. She stared at the single ladder stretched across a crevasse. In the dawn light, She couldn’t see how deep it was. Just as well.

Mingma looked at her as She took a second carabiner off her harness. He went across first. Clipping in ‘biners to the two safety ropes on either side of the ladder, he stepped onto the first rung, then the second and without so much as a pause he was across, standing there staring at her. She could almost hear him in a deep JohnWayne drawl; “OK, kid, I showed you how to do it, now get on with it.”

She leaned over and grabbed the safety line, left one first. Clipping in, She felt secure. Then the right; now more secure. Moving her right boot off the snow, her front crampon points touched the first metal rung. A metallic clink sound provided the feedback. Her left foot followed stepping on the second rung. She was on the ladder. Now it was time to move.

The death grip on the safety line hurt her hand even through her thick gloves. She relaxed the grip. Her right foot inched forward, not too high off the ladder. She made a sudden decision to take it one rung at a time, not two or three like Mingma. Her front points made a successful landing on the next rung.

She felt good, proud of her baby step, but then everything changed. Feeling panic, She sensed something was wrong. She stopped with her right foot ahead and her left behind. She looked over at Mingma; then, it occurs to her – breath.

Welcome to the Icefall 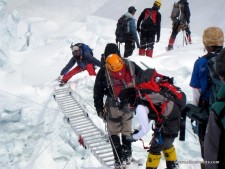 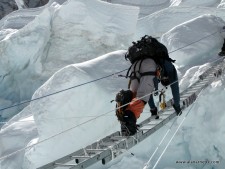 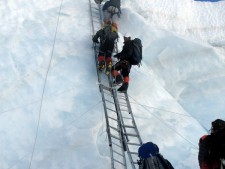 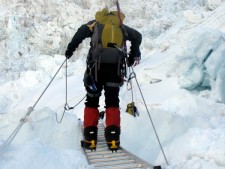 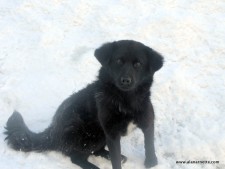 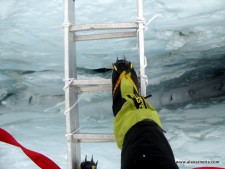 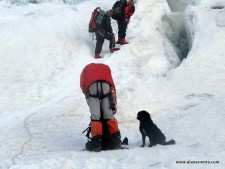 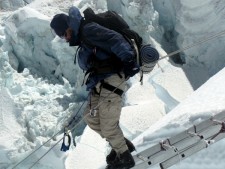 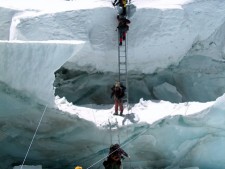 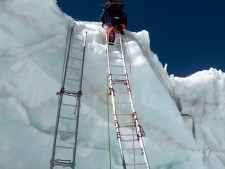 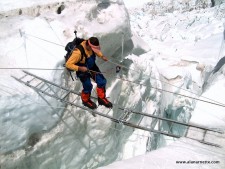 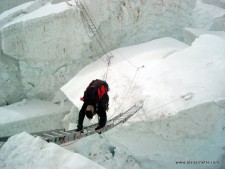 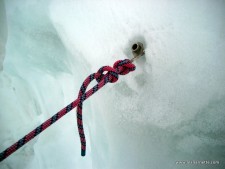 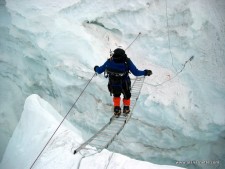 One Response to “Virtual Everest 2020: First Steps in the Khumbu Icefall”