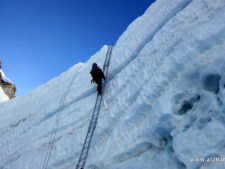 Is mountaineering an individual or a team sport? Can you really climb Everest, “solo?” Why are there 1,000 people at Nepal’s Everest Base Camp? Does it really take that many people when less than 300 foreigners summited? Our fictional team from Mount Everest Guides takes on these questions over dinner after a training day at base camp.

It Takes a Village

The team spent the day practicing skills on a course set up by the Climbing Sherpas next to the camp. They had a fixed rope on a steep wall used for ascending and rappelling down. There were two ladders spanning a small crevasse where the team practiced crossing in their 8000-meter mountaineering boots and crampons. It was a productive day, where everyone learned something new or refreshed old skills.

Snorer and Old Man walked side by side, back to camp. “Hell, I remember crossing my first ladder last year,” Old Man started. “I went so slow that the Sherpas started laughing at me. I deserved it and started laughing at myself. I was so afraid of falling. There were 15 crossings, most were only one or two ladders, but near the top of the Icefall, the Docs had lashed five ladders together so we mortals could get up a 30-foot ice cliff.” Anyway, after crossing all these a few times, I got used to it, and the fear went away.”

Snorer picked it up, “I felt OK on the ladder practice today, but jugging up that rope on the little wall was tough. I did what Dawa told me do, you know, climb with my legs, not my arms, kick the front points in hard so they stick, don’t have a death grip on the jumar. But I felt like I was a baby elephant, on wobbly legs hanging on for dear life with my short trunk to the damn tiny line. What am I going do when it’s the real deal?”

Back at camp, everyone retreated to the silence of their tents. Most took a nap, some slept hard as demonstrated by Snorer.

“Base Camp is huge. I bet there’s a 1,000 people here. Why so many? I thought Nepal only issued about 300 permits this year.” Dutch asked the team over dinner.

The two new members of the team, affectionally known as Buddies – that is Buddy and Bud – had met the rest of the team at base camp. They had not trekked in with everyone else but went on their own by way of Goyko Lakes and the Cho La Pass. The pair had climbed together a lot around the world on almost every continent. Back home they ran a climbing gym business together.

“Well this is our first time to EBC but from what I know there are a bunch of reasons for all the people. First, we all have personal Climbing Sherpas, so that’s 10 more just for us. Then we have five people in the cook tent between the cook and the guys who haul water here every day. Then Guide told me we have an additional five Sherpas who do nothing but haul gear up to the high camps. You know, tents, stoves, oxygen kit. So if I’ve got my math correct, we have over 30 people just in our camp.”

About that time, Chhongba, the base camp cook walked in to see if dinner was OK and if anyone needed anything else. They met him with a round of applause. He had been cooking for expeditions in pre and post-monsoon seasons for 15 years. His English was excellent. Listening to the conversation, he noted. “Don’t forget that every day, there are porters who bring in fresh vegetables, eggs and some meat from the lower villages. Often they stay the night. Also the yak drivers. Oh, and that guy who hauls our blue barrels with poop in it every few days.” The Buddies said in unison, “Holy shit! I’ll never complain about my job again!” Everyone laughed but also said a silent thank you to the Blue Barrell Man.

One of the Buddies, coughed. He coughed hard. It was loud. Everyone paused, lookinga tim with concern. “I’m Ok, just a bit of a cough.”

She spoke up, “What about Everest Hospital? They have a volunteer team of about five people who do medical stuff.” The Hospital provided medical services to climbers for a flat fee of $100 for the season. Often the guide companies would pay for all the climbers instead of hiring a doctor just for their team. However, the Hospital treated any Sherpa, porter or local Nepali at no charge. This was their 20th year of providing this service.

Dawa came in hearing the laughter and conversation. “You are forgetting about another group that without, none of you, or us, would climb Everest from this side. The Icefall Doctors.” 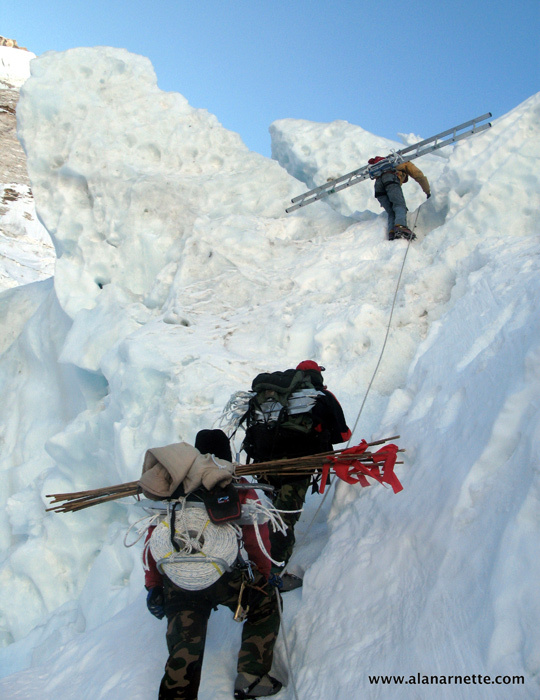 On the Nepal side, the Icefall Doctors were a team of eight dedicated Climbing Sherpas that installed aka “fix” the route from Everest Base Camp to Camp 2 in the Western Cwm each year. They first scout the route for the safest and most direct path, then they carry, on their backs, hundreds of pounds of rope, ladders, ice screws and pickets into the Icefall and the Western Cwm to create the route.

The ropes must be reset each season because the ultraviolet rays from the sun rot the ropes causing them to fail under the weight of a climber’s fall.  In addition, the route must be maintained daily throughout the season given the Icefall is a moving glacier and can move up to three feet a day. This movement causes ladders to drop into crevasses, bend them or move them into a dangerous area. The Doctors inspect the route at least once a day throughout the season to keep it open and safe.

From Camp 2 to the summit on the south side, a dedicated group of different Climbing Sherpas set the route. In a major safety move for 2020, the Nepal Tourism Ministry approved using a helicopter to ferry ropes and anchors to C2 for the route to the summit. Before it was hauled up by Sherpas and increased the risk of an incident like in 2014 with multiple trips through the Icefall. 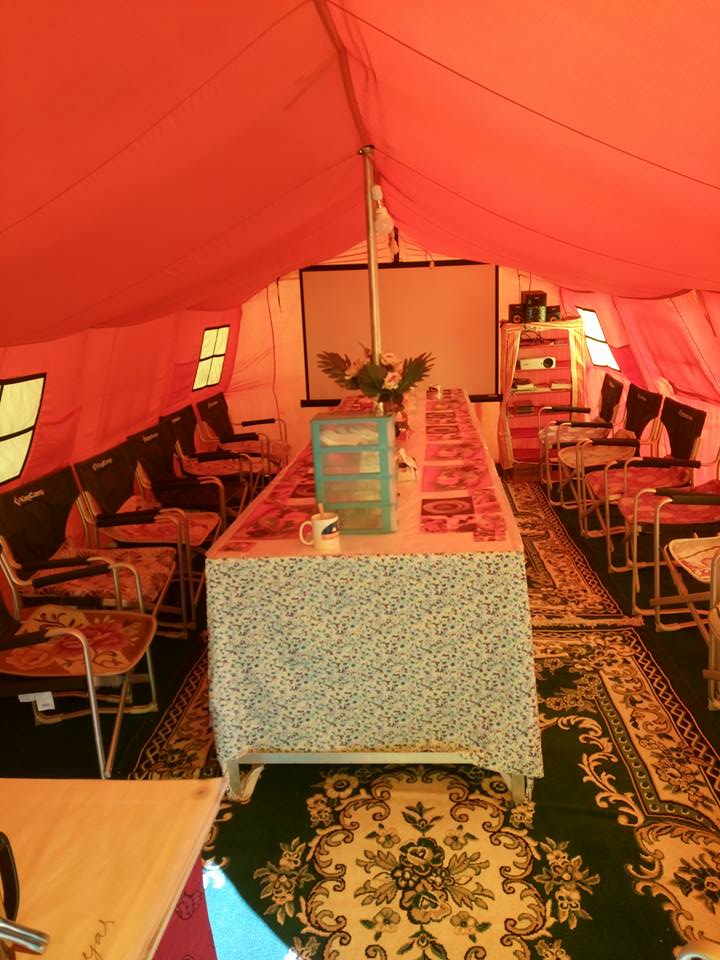 Buddies joined the conversation. “What about those people who say they climbed solo? If they use the ladders and ropes are they still solo?” Guide, rubbing his forehead, seemed uncomfortable. “Well in my view the only person to have solo’d Everest was Messner in 1980 on the northeast ridge. There were no ladders, ropes or other people on the route. He was truly on his own. Today, people can climb without Sherpa support or teammates but unless they go out of their way to not follow a boot path, or use a ladder or fixed line in steep places, they are unsupported but not solo. I know this is controversial, like using Os. Our sport is filled with egos.”

“When will the ropes reach the summit?” Loner asked. Everyone looked at him because this was the first question he had asked all trip. Dawa stepped up, “Usually, it’s in by early May. The Docs have the route to C2 already and the helicopter should take the gear up in a few days. There are already a few teams at C2 on their rotations so I think this year will be the same. I think around May 5.”

“Does that mean we can summit early? Back in Kathmandu, you said we would summit on May 19.” Dutch was excited about this possibility and spoke with great anticipation. “Hold on now,” Guide jumped back in. “We have a lot of work before we start talking summits. We’ve got at least two rotations to C2, including that trip to C3 we talked about. And then there’s the weather. We’ve had the usual good period thus far, but traditionally it turns rough in the first couple of weeks in May. Also, to be honest, I don’t want to be the first. I’m happy for some of the eager teams to go up, find out the route conditions. Let the huge teams get out of our way. We will play it safe and slow. Patience is the play here. This is a marathon, not a sprint. I’d be happy to be last.”

“Listen up everyone. Tomorrow is a big day. We go to the Football Field in the Icefall and back down. After a rest day, we head up to Camp 1 for a night, then 2 for four nights. Time to get your heads in the game. Up at 2. Breakfast at 2:30. Walking at 3. Don’t be that person we have to wait on.” Guide told the group.

The Couple looked at each other. She looked over at Dutch. He looked at Loner, who smiled for the first time on the trip.