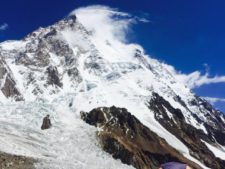 There are two teams now at K2 Base Camp, Seven Summits Treks and John Snorri. Big winds at Base Camp, 40 mph on Thursday, building to 60 during Friday have everyone in tents trying to stay warm. Higher up on K2, you can double those wind speeds. I image it’s pretty miserable. Another SST member leaves, expect more after this storm.

Huge winds the next couple of days, including unbearable speeds high on K2, then a day or two of calmer conditions, but still high. We might not see any summit bids until February. 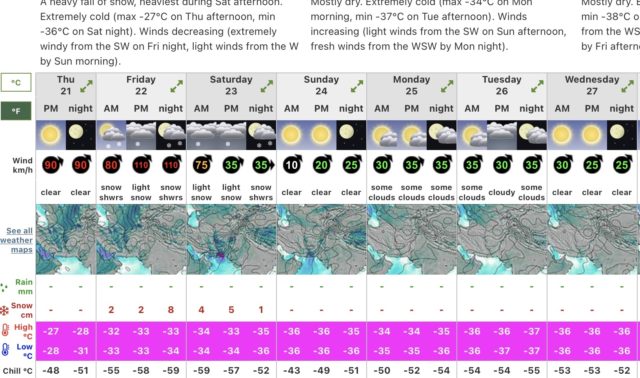 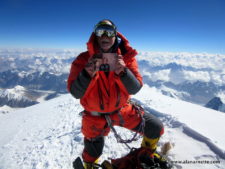 Alan Arnette on K2 summit with picture of Ida Arnette

How are our climbers staying warm with the mind-boggling temperatures and windchills? When I summited K2 on July 27, 2014, it was a “mild” day, probably about -10 to -20F with a light wind. I wore my Mountain Hardware down suit with a thick fleece and Moreno wool base layer. I had Darn Tough sock and La Sportiva Olympus Mons 8000-meter boots. I used a pair of The North Face leather gloves lined with primaloft insulation. As I was descending around noon to Camp 4, I had to unzip everything because I was too hot.

Well, this system would not work for winter. I reached out to Dawa Sherpa, principle and expedition leader for Seven Summits Treks to find out what changes they are making for winter. He had some interesting details to share.

First he said climbers had additional mid-layers, mostly more down between their normal summer base layers and the down suit. This could be an additional down jacket or down paints. This certainly will add bulk but also warmth.  As for the down suit itself, Dawa said most people had more down than usual even up to 1500 gr of down fill, over twice the regular 800 fill. Remember, it’s the amount of down that makes it warm, not necessary the quality i.e. 700,  850, 1000 etc. 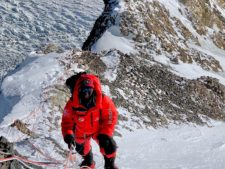 As for hands and feet, Dawa said: “For hands everybody uses either chemical hand warmers, already from c1-2 or electronic heated mitts.” But it seems that boots are a big problem as he describes:

For feet, people are using heated insoles or heated socks. We noticed that most 8000m boots are not designed for deep winter. Because the constant cold boots don’t thaw out and a ice layer will form between the gaiter and the boot. It seems like Millet and La Sportiva are the worst, Scarpa a little better, but also not perfect.

Finally he talked about the cold in general:

The cold is huge problem, even traveling to the lower camps. A small mistake already causes frostnip and almost everyone who travelled above C2 has some kind of frost injuries. Windpeeds that are totally acceptable in summer are already to much in winter. Cold management is extremely difficult.

As we know from the summit team last Saturday, eight of the ten climbers experienced some level of frostbite. It’s said that the two Sherpas who descended all the way to Base Camp instead of stopping at Camp 3 like the other, were motivate by their frostbite.

John Snorri Sigurjonsson with Muhammad Ali Sadpara and his son Sajid Ali have signaled they will stay as long as it takes. John tells me that Muhammad and Said will try to help recover Alex Goldfarb, “They are going to try reach Alex today. It’s really dangerous he is below serac in 60% and all fully of cravases in 5.800m.” And his summit plans, “There is a window coming after the storm. I plan to use it.”

Seven Summits Trek’s has their team at base camp. By my count there are 18 members and about 20 Sherpas still left. It appears that 20-year-old Brit, Adriana Brownlee, the only client with Nims has decided to leave along with Nims team.

I asked Dawa Sherpa about the incoming wind event and he just said “We will tie everything down.” Now that’s an understatement!!

With the death of Sergi Mingote, one of his climbing partners, Tamara Lunger (probably the most experienced member for winter 8000ers), is working through her emotions. She said, “I want to reassure you that I’m fine, still upside down of course, but I want to thank you all for your support. Despite the distance you all manage to make yourselves heard and be really close.”

Simone Moro, Alex Txikon, and Iñaki Alvarez are back to Manaslu Base Camp after making a carry to Camp 1. Tenji Sherpa and Vinayak Jaya Malla, both Nepali internationally certified mountain guides (IFMGA) are at Manaslu Base Camp ready to move higher.

The cold is still with us. Quiet day at BC, planning, resting and writing a few things. At this altitude, everything is hard. Tomorrow or the day after, depending on the weather, we will start our second rotation. The joy of the day was the video call with the Nepalese team who summitted K2 on Saturday. I am so happy for them!

Karl Gabl is never wrong! And not even me to trust him! All the different bulletins predicted 2/3 days of sleet and strong winds at high altitude. Working on the mountain unfortunately seems difficult. We are talking about winds between 90 and 170 km/h on several days.Up at base camp the sky was splendid this morning, but yesterday I listened to Karl and went down to Samagaon and now it’s snowing… The Sherpas Tenji and Vinayak with their photographer followed me yesterday, so now the four of us are here waiting for the weather to stabilize. Alex and I however could go up in 48 hours, it seems there is a day where the wind at camp 2 will be “only” 60 km/h. If we could make a second rotation then we would be ready…