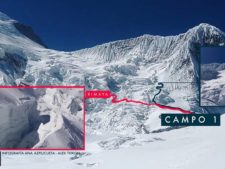 Climbing 8000-meters peaks in winter takes a toll on climbers and teams. The Manaslu team has seen another climber quit due to weather conditions. The Laila Peak Polish team in Pakistan has given up, and sadly the missing three on K2 have been officially declared dead. 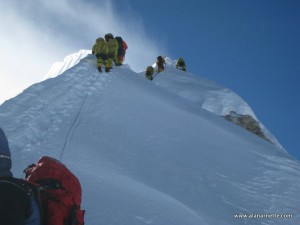 Simone Moro, had left Alex Txikon, and Iñaki Alvarez at base camp after the three reach 7000-meters. However, Moro getting a weather report of impending high winds left the two and returned on his own to Base Camp. Now he has left the expedition all together. The remaining two say they will make another attempt if the weather allows. Alex updated:

Helloo! Here we continue, in the BC waiting for the wind drops (well, Iñaki has gone down to Samagaon today to rest). We are very motivated! The route is beautiful😍 And most importantly, we almost have it !!! We have left deposits at 7,000m, 6,500m and 5,750m. Time runs against us but if the weather gives us a chance, let’s go for it!

My winter expedition to Manaslu as a component of Alex Txicon’s expedition ends today.
It is the third goodbye to Manaslu in winter, after 2015, 2019 also on this 2021 I want to say only goodbye.

The mountain and weather conditions again this year lead me to give up.
My limits and abilities are highly inferior to those of the Mountain I have encountered in these three winters. Acceptance of this has allowed me so far to survive my dreams and let my head prevail over my heart.

I have been part of a fantastic group that has accepted me and allowed me to interpret the climb with them while maintaining independence and freedom and this is a credit and a thank you that I want to acknowledge to Alex and his group. Never a disagreement, never an argument, total harmony have confirmed the fraternal friendship that I have and maintain with Alex even after this surrender of mine.

It was a tragic and difficult start of the year for the whole of mountaineering and we too had to emotionally manage the weight of these bereavements of friends and climbing partners who never returned from K2.

The crevasses we encountered on the Normal Route in mid-January and the new variant that Alex and all of us opened consumed the most beautiful and stable days I have ever encountered in all my winters. Unfortunately, when the variant was completed, the winter at Manaslu was back to its old self, very strong winds at high altitude interrupted by a few days of clouds and fog and the usual, though this year weak, snowfall. The wind tore the snow off the ridges and settled it on the medium-low part of the mountain and it was always a struggle to get going, with immense efforts to open the trail, often sinking to the belly, even with snowshoes on.

Karl Gabl was my, and our, silent climbing partner. In addition to his bulletin, other meteorologists were also contacted and almost always the forecasts coincided. Man is imperfect and vulnerable and I am the first to be so. Upon receiving the latest bulletin from Gabl predicting high winds of over 175 km/h until early March, I decided to continue to trust him and prefer to give up and stoically endure beyond February.

Winter ends on March 20, I confirm, the permit we have however expires on February 28. You can ask for an extension and maybe that’s what Alex and his companions are considering despite professional and family commitments.

I thought about it too, but I pondered the signals that destiny and the tragic events of this 2021 sent me.

I did all of my winter work between 12/21 and 2/28. Perfectible and improvable in style and mode but “unassailable” in terms of time. I want to continue to maintain this characteristic, accepting this year the third renouncement to Manaslu and the inevitable (usual) criticism and personal attacks which are the result of the gift and the opportunity that social networks have given to everyone. If social networks give fame it is right that they also dispense criticism. If calm, polite and relevant I will take them into consideration as always.

I thank those who have taught me caution and fear, I thank those who have followed me, those who have supported or endured me, the companies that have trusted me for over 30 years and have NEVER asked me to risk or win at all costs. They are the wealth that this surrender does not take away from me. A thought goes out to the friends who have left us at the beginning of 2021, not only in the Himalayas but in the mountains at home and around the world.

I will wrap up by sending positive energy and thanks to Alex, Inaki, Eneko, Anna, Aitor, Phelipe, for the two months spent together. I will support them emotionally and morally in the decisions they will make in the coming days. They will surely be the right ones for them.

A hug and I’ll see you soon because turning a page doesn’t mean ending the journey. I still have too much desire for action and the list of dreams is long…

Tenji Sherpa and Vinayak Jaya Malla, both Nepali internationally certified mountain guides wanted to make an “alpine” ascent independent of Txikon/Moro but abandoned their effort after a few sortie’s declaring conditions unsafe and that they couldn’t achieve their style objective.

On Laila Peak in Pakistan, the Polish team has abandoned their winter effort due to poor weather.

As members of the 20+ member/25+ Sherpa Seven Summits Treks team arrive at home and talk to friends and families about their experience, it’s clear there was confusion with respect to logistics as evidenced by the situation at Camp 3 with missing tents. Others talk about missing oxygen bottles and still others are wading into the blame game primarily around fixed ropes. Even well-respected Pakistani icons and tour operators are jumping in.