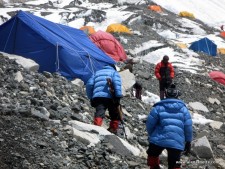 I had hoped that Nepal would let this spring season occur without the annual histrionics and propaganda of new rules, after all, isn’t dealing with COVID enough?

But, alas, the temptation was too great. It seems the photo of the line of climbers between the South Summit and Summit in 2019 cast a negative image on Everest (as it should have) and the Ministry of Tourism, MoT, always, without hesitation, tries to manage their reputation, even when the management itself comes across as silly. 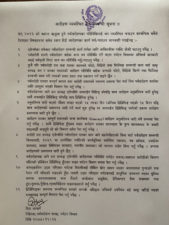 The MoT posted eleven “new” rules only in Nepali on their website suggesting they really never intended for it to be taken seriously by anyone who does not speak Nepali. As usual, it feels designed for the mainstream press to parrot resulting in Nepal seen as properly managing their golden goose.

Most of the rules are not new and have been previously floated, and as always, never implemented or enforced.  These items are coming as climbers around the world are finalizing their plans and gathering COVID documents to enter Nepal in a few weeks. I’ve covered these annual public relations moves for almost a decade if you have the patience to read and read.

You Can Take a Picture, Just Don’t Share it!

Let’s start with the official statement from Mira Acharya, director at the Mountaineering Division of the Department of Tourism to the Kathmandu Post

Our law bans the dissemination of photos and videos taken on Everest without the department’s consent. But the practice has not stopped.

I wonder if she winked at the reporter when she said this? She went further if that’s possible:

Each climber can take, share and make images and videos of their group or of oneself but they will face action if they take, make and share photos of other climbers without the department’s consent. We honour the personal freedom of climbers but that does not mean they can post images and videos of others without their consent. Either through commercial cameras or mobile sets, all such activities have been banned.

It’s not possible to prevent the dissemination of videos or photos taken on Everest because millennials stand out for their use of technology, and even the older generation has embraced digital life. You make a click here and in an instant, your photo goes around the world.”

Remember, all of this stems from a picture of crowds that seemingly embarrassed some government official. Nevermind that the root causes of the crowds were: short weather window, inexperienced climbers, unqualified “guides”, and record permits issued by Nepal.

Nothing mentioned in today’s new rules addresses any of these real issues. See my review of 2019 for more details including why so many Indian climbers are dying. 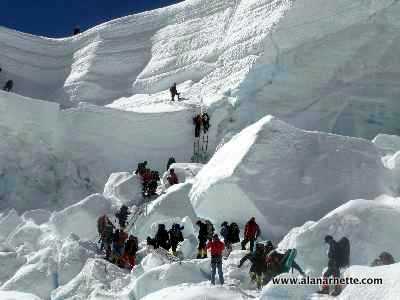 Take this scenario. You are climbing in the Khumbu Icefall and take a picture of several people above you. You have no idea who they are but it’s a great shot of a legendary, or infamous place depending on your viewpoint.

The strict letter of this rule is that you need to ask the Mot and/or each person in your picture permission for you to post this great image on social media, a website, or use it in a slide show when you get home.

Among the new rules that came into effect on Tuesday, March 9, 2021, as described in the Post article:

As you can see, these feel bureaucratic in nature and will in no way improve safety, ensure that only experienced climbers are on the mountain with qualified “guides.” In other words, nothing changes.

I use the Himalayan Database as my primary source of Everest summit statics. If you are climbing in 2021, they are asking you to fill in an electronic web-based survey. This replaces the time-consuming process of visiting each team in their hotel before the climb.  Please use this link to complete the survey. You can now download the HDB for free at their site.

I will post a few background articles and interviews between now and early April when the teams arrive at the base camps. If you would like to see anything special this year, post a comment or drop me an email.

Here’s to a safe season for everyone on the Big Hill, but only take selfies!