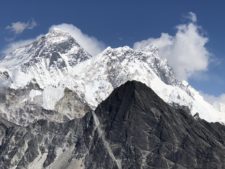 It was a big week of news on Everest this past week from clients summiting to a major operator canceling their expedition. This next week looks to be even bigger with 300 people trying to summit beginning May 19.

I estimate 172 summits last week on May 11, 12, and 13. The jet stream was south of Everest thus the conditions were about as good as it gets on this high peak. However as the jet moved north, the winds picked back up, and teams that were hoping to squeeze a summit bid in before it hit with gale-level gusts, found it too windy even at Camp 3 to continue.

The big news of the week was on Saturday, May 15 when Austrian operator, Lukas Furtenbach, told his entire team that he was canceling their expedition due to an “out of control situation at Everest Base Camp.” Furtenbach was one of the few operators who imposed stringent controls over his base camp to minimize the impact of COVID-19. He brought hundreds of test kits, hired a team doctor, and limited any exposure with anyone outside his team, including his Sherpas, cooks, and other base camp staff. Yet, he still felt the risks were too high for his 20 customers, 4 mountain guides, and 27 Sherpas. His entire team had completed their acclimatization and were waiting for the winds to recede for their summit attempt. He said. “With some teams, elementary precautionary measures were simply not observed. There were meetings between the teams, there were celebrations, parties were held.” You can hear Lukas describe their plan on this interview I did with him on March 15, 2021.

I am devastated, I am disappointed, I am sorry for my clients, I am sorry for our sherpas and guides. We tried to do everything right. As right as it can get, running an expedition during a pandemic. We had our safety protocols, we were moving isolated, we were isolated in basecamp, and we did extensive testing. We were even more careful when the Covid outbreak in basecamp started, when we heard from the first teams with covid cases, the government denying these cases, and other teams still having parties. I was calling for a mass test in basecamp. The call was ignored.

We tested even more, while others never started to test, or, stopped testing after too many sherpas or members were tested positive. If we send people up on the mountain, clients or sherpas or guides, that feel well and are tested negative, they can still be infected and get sick the next day, or after two days, in c3 or c4.

Covid is a pulmonary virus. Getting symptomatic in c3 or higher, with fever and breathing problems, can be a problem. A real severe problem, like dying. Because helicopters can’t fly up there. I could not live with being responsible for the death of a sherpa or client because of a covid infection thatbhot problematic during our summit push.

We all know that we have a massive outbreak in basecamp. All teams. Pilots know, insurances know, HRA knows. Still sending people up is negligent from a legal point of view and inhuman from a moral point of view. Our team doctor told me this morning, if we are sending people up, she is out. Our guides agreed. I agreed. We all did not sleep for two nights. Now we feel relieved. Devasted, but relieved. Because at least our expedition will not be responsible for covid cases high up on the mountain. I hope for a safe season for everyone

Legendary climber Andy Politz told Thom Pollard on his podcast that they maintained tight discipline at their camp and even then one of their members got sick and had to be evacuated to Kathmandu.  One high-profile Sherpa, Jangbu Sherpa, made the news with his 17th Everest summit after he contracted COVID, returned to Kathmandu for treatment then quarantined at home for six days. The Himalayan Times reported he summited on May 11 with e Bahrain team but got sick and was helicoptered back to Kathmandu on April 20 where he tested positive, was treated, and returned to summit.

In an interview with CNN, Tashi Sherpa, Chairman of Seven Summits Treks said “30 of their Everest clients had tested positive.”

Meanwhile, the Nepal Ministry of Tourism continues to deny any outbreak at EBC.

The jet stream is expected to move north on or about May 19 or 20th so teams are leaving now to be in position. I expect well over 200 summits over the next few days. The good news is that the super team of Seven Summits Treks has already had their opportunity so that takes over 100 people off the mountain that would have gone as one large group. This is when long lines (queue) occur. A long line of “slow” climbers who won’t move over for faster ones.

There’s a possibility that base camp will empty out with everyone who wanted to attempt the summit, do it and the season ends by May 25. If that scenario plays out, it will be one of the shortest Everest seasons in history. Usually, there are a couple of teams who wait until everyone has made their attempt and then take their crack at it. Dave Hahn was famous for this! In 2019 Mike Hammill played the same strategy and put his team on the summit of a virtually abandoned mountain. It ended up being a brilliant move given the huge line of climbers caught in that viral photo between the South Summit and Summit.

Best of luck to all this next week.

Only 82-year-old Carlos Soriais with teammates, Sherpas, and cooks are still there. he suggests he may give it one more go. The base camp was hard hit by COVID and the teams were very transparent in reporting it. Apparently several of the climbers who successfully summited Annapurna last month went to Pokora to rest and contracted the virus there before going to base camp. Over 25 people were helicopter back to Kathmandu including several members of the Nepal military who were there to clean up the trash at camp.

It appears there were no summits on Makalu but I could be wrong as the news from there has been scarce. I do know several people made an attempt and turned back.