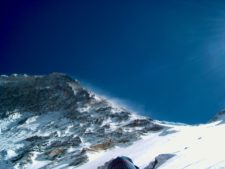 Teams are making serious summit plans with a few already staged at the South Col albeit in windy conditions. In fact, it’s too windy to go for the summit so they will hold in place Saturday, May 22 hoping to leave late Saturday night for a Sunday, May 23rd summit. It’s all about risk management at this moment.

Teams are preparing to leave base camp hoping to reach the summit before the next cyclone, Yaas, has any impact on the Hill. Leaders are weighing several factors in making their decision to go or forgo the summit bid.

First and foremost is safety. This starts with acclimatization. Thus far, 2021 has been a long season for those who missed the May 12/13 summit window. They made their last trips above base camps a couple of weeks ago, so they should be rested. Acclimatization will hold for this long but the mental game can be tough. Climbers must maintain their focus on self-care and daily “active” rest days. Leaders must “lead” and help their team be patient. This starts with open and honest communication as to weather, schedules, and the possibility that they may not get a chance to make a summit attempt.

Next is understanding the conditions on the mountain. There has been some fresh snow recently but not enough to pose significant avalanche danger. Then there is rockfall, a little snow will “glue” loose rocks in place, but too much and we’re back to avi danger. These days everyone wears a helmet on Everest. In 2002, my first time there, almost no one did! The Icefall is another consideration. This year, the route seemed a bit longer but more straightforward than in previous years. Also, there were significantly fewer ladders. As we get closer to June, the temperatures rise and will be above freezing thus making the seracs in the Icefall less stable. So climbers will need to move as fast as possible through this labyrinth. Leaders must push their members to meet climb times now more than ever. Same for the Lhotse Face.

We’ve talked about crowds all season long with the record 408 member permits pls an equal amount of Sherpas in support. However, given close to 175 summited a couple of weeks ago, combined with another 150 or so who left the mountain for various reasons, I’m not too worried about the crowds this time around. Most likely there are somewhere between 150 and 300 people left to the summit – a wide range I know. When I summited in 2011, I was the fourth person to reach the summit that morning along with Kami Sherpa, whom I never could have done without his support. But that day, May 21 saw 200 people summit and we never had to wait. We did, however, make a strategic move, or I should say Kami did and I followed, bypassing 40 to 60 people just outside of base camp at the bottom of the Triangular Face on the way to the balcony. This move put us in place to move fast, and we did by reaching the summit in eight hours.

Then there is the weather. Again, I’ve mentioned this many times but the winds above the South Col need to be under 30 mph, maybe 35 at the most. Most people focus on the still air temperature, astounded that it can be 20, 30 even 40 degrees Fahrenheit below zero. But believe it or not, it’s not that bad. Like they say about the desert, it a “dry heat!” Well similarly, if the wind isn’t blowing it’s manageable with the proper layers. But when the wind picks up, all bets are off. Again, referencing my summit, it was -20F with a 20-30mph wind, and it was cold. I put my extra down jacket on over my down suit to stay warm on the summit.

Finally, is the input from the Sherpas, especially the Sidar who is the lead climbing Sherpa. These men, and some women, have extensive experience and know the mountain well. Also, they know the weather and can integrate all of this into what we might call intuition in the west. The Sherpas are simply indispensable in climbing these high peaks. The leaders, both foreign or Nepali/Sherpa know this and seek their input.

Marc De Keyser, Meteorologist/Owner of weather4expeditions.com weighs in on the current and potential second cyclone:

On this morning’s water vapour satellite image we can still see the signature of the ex-cyclone Tauktae. The former center is currently positioned in South China, North of the Himalayas, whilst the remnants of its frontal structure, extend to the South. At the moment 2 potential summit days emerge: 23rd and 24th of May.

The bad news is that the development of cyclone Yaas in the Northern parts of the Bay of Bengal, is confirmed again today. At this moment, its incipient stage is the 23rd of May but from this point it develops very rapidly and moves quickly Northwards and will enter the province of Odisha as a cyclone on the 25th of May. Along its Eastern flank patches of warm, moist and potentially unstable air are pushed into Bangladesh and move further to the NW to reach eastern Nepal on the 26th of May.

At this point the model indicates a slight increase of wind at all levels of the mountain but not too extreme. The major effect will be the amount of precipitation that develops on the 26th of May and continues even more abundantly on the 27th of May. What is going to happen beyond the 27th is at this stage impossible to pinpoint, all depends on the exact track of cyclone Yaas once it is on the continent.

Overall, I estimate between 250 and 300 total people left to summit throughout this period. See my location table for team locations.