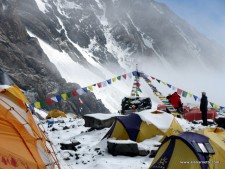 A big snowstorm has stalled climbing on K2 and Broad Peak. Meanwhile, the Nanga effort has ended. Some climbers are biding their time at C2 on K2 in difficult conditions. A quick look at today’s news.

In Everest news from this past spring season, Nepal’s Department of Tourism said a total of 457 people summited from the Nepal side, made up of 182 foreigners and 275 Sherpas.. The Ministry had issued 408 foreigner permits making this one of the lowest summits to permit ratios in years at 44%. In 2019 they issued 382 permits and 292 summited for a ratio of 76%. Cleary COVID took a toll on the foreigners and Sherpas. In 2021. In 2019, 94% of the Sherpas summited this spring only 67% topped out.

Most teams are back in their respective Base Camps waiting out a few days of big weather hoping to return to their business once the snow settles. However, a few climbers went into the teeth of the storm and now are waiting it out at Camp 2 on K2. This is not a very hospitable place with exposure to the winds and more snowfall. The largest issue in my mind is that they need to give the fresh snow time to settle to minimize avalanche danger.

In speaking with Irina Galay‘s home team, she hopes to wait it out then “tag” Camp 3 before returning to Base Camp. They expect her to do this towards this week’s end. She is there with one teammate and at least two Sherpas as part of the Ukrainian-Nepalese K2 Expedition 2021. She hopes to be the first Ukrainian female to summit both Everest and k2.

This update from Marc De Keyser on the anticipated weather:

Hey Alan,  today and especially tomorrow are not so good, showers and possibly thunderstorm. But then improving again on the 14th. The jet stream has come closer so tomorrow and the following days will probably get very windy at +8000 meter levels. So a clear-cut window for the first summits is not there yet.

I’m not expecting a lot of fresh info over the next 36 hours as heavy snow will hamper the new 4G cell tower recently installed in Concordia.

It seems prudent to share that I am able to get the odd post out from a location not too distant from basecamp. From there I can hit a 4g tower that the Pakistani Military has installed. Not surprisingly, being a weeks walk from the nearest town and in one of the largest mountain ranges on the planet, this tower has been heavily effected by storms and has subsequently been quite inconsistent. So please don’t worry if you don’t hear from us for long stretches. Know that we’re out here doing what we love and taking all the precautions necessary to come home in one piece me this update:

The Spanish team led by Manuel Gonzalez of Enrique Osiel, Iñigo Delgado, Sergio Carrascoso, and Carlos Santafe canceled the expedition due to weather and slow progress after reaching C1 at 5500-meters

Karakorum Expeditions‘ team said the fixed ropes reached C3 on K2. They gave this update proudly (rightfully so!) listing the names of the Pakistani climbers who are fixing the ropes.:

In the video, one of the strongest lead climbers #EidMuhammad is breaking the trail to camp 3.

We are aiming for the 16th July broad peak summit if the weather permits!

In my second rotation at broad peak camp II,Stephen and I had a rough night! The bad thing I noticed that my team fixed lines up to camp 3 on the broad peak, all the new carabiners have been stolen! Sad!

Lotta Hintsa  gave a very nice update on the status at Broad Peak:

I guess it’s time for an update. The last time we went up (no idea what day it was… let’s call it first day of the weather window) we climbed straight back to camp 2 with crazy heavy packs, with enough food and gas to last us five days and some more rope. We also wanted to bring up all our summit gear, like bigger down garments, etc.

In camp 2 we stayed for three nights, while working up towards camp 3, braking trail, carrying ropes and fixing some of the way. It was a pleasure to work alongside a Shimshali fixing team at one point, awesome guys! The snow was at times up to my chest and above, crazy…

Third morning we made our way to camp 3, slept a night, hung out a day as other climbers came up behind us. The next night @donbowie and I decided to see how high we could push, maybe even to the summit. But the snow was very deeeep and honestly we were tired from working five days on the mountain, pushing the route to camp 3 with the HAPs, so we turned around near the first seracs, took a nap in C3 and came all the way down to basecamp.

Now waiting out a storm and resting and eating… looks like we’re gonna get more (🥁) snow!!