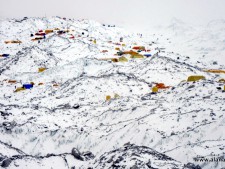 Our fictional team returned from their first trip to the Khumbu Icefall. Almost everyone did well, but there are signs of problems for a couple of climbers. Today, it snowed heavily at base camp, so it will be quiet but … also a difficult conversation.

“Mingma looked at her with pride in his eyes, “You were good, fast, Didi.” He offered unsolicited praise. The Climbing Sherpas called most women, Didi, a title meaning ‘older sister.’ She smiled broadly but was tired. “Dhanyabad,” She said, looking at his bright eyes.

As the team sat down at the Football Field, about halfway up the Icefall around 18,500-feet. It was near this spot that the 2014 ice serac release took so many lives. Dutch and Loner sat on their packs drinking water with electrolyte replacement powder. The Couple wolfed down Snicker bars. Boyfriend looked very tired, staring at nothing with glazed eyes. Buddies took photos of each other.

But Old Man looked, well old. He sat down on the snow, not taking off his pack. The first rule of climbing is to take short, efficient breaks. Immediately upon stopping, the process is to take off the pack, put on another layer to keep the heat already generated close to the skin, take out food and water, sit pon the pack and take on calories and fluids. The break should last no longer than 10 to 15 minutes. Old Man was far behind. Guide sat down next to him, “What’s up?”

The return climb to base camp was mostly uneventful, and the team took naps until dinner. Low dark clouds blocked the sun creating a chilling afternoon. The team was quiet over dinner, tied from the day. The weather matched their mood.

The next day, they awoke to the usual sounds of hissing gas stoves. This had been a nice signal that the cooks were making breakfast, and fresh coffee would soon be ready. But the sound was different this morning, muffled, muted, not with the usual pitch. She glanced at her altimeter watch, and it said 7:30. Usually, by now, her tent is bright wi the morning sun, but today it was dark. Then She understood asMingma came by shaking the outside walls. She heard several inches of fresh snow slide off, revealing more light. Several inches had fallen throughout the night, and it was still snowing. “Good, today was already a rest day,” She called out to Mingma.

On days like this, climbers usually settle in and find their rhythm. There would be the usual three meals, and with the weather, no acclimatization hikes to Camp 1 on Pumori. It would be a true rest day except for some business that needed to be conducted. 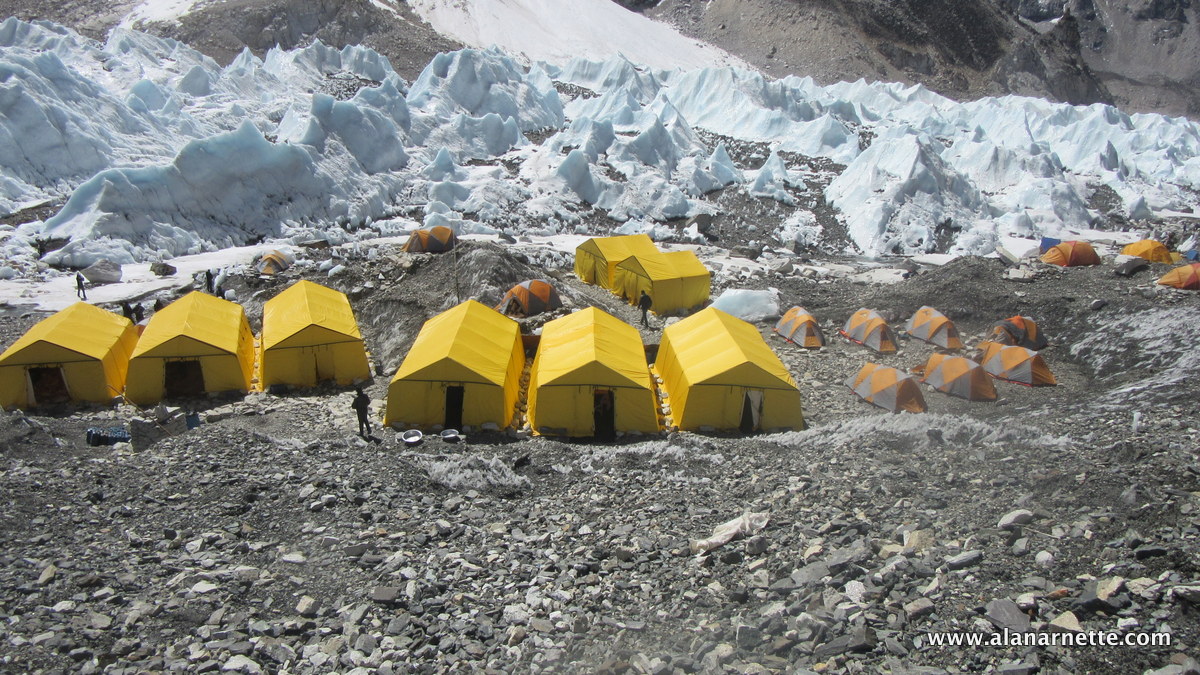 “You OK?” Girlfriend asked of, hopefully, her future husband. “Yeah. Surprising how hard that was. I bailed on Denali’s headwall, but thought I learned a lot and could do this.” He said looking at his boots. “You can, you can,” She said leaning over to look into his distant eyes.

“Can we have some coffee?” Guide said outside Old Man’s tent. “Sure, what’s up?” he replied while unzipping the door. ” They walked over to the dining tent. Old Man had a bad feeling. No one else was there. “You were pretty slow yesterday in the Icefall. Last one to the Football Field, and you weren’t taking good care of yourself.” It was Guide’s job to monitor his climbers. To help and support them but also to protect them from themselves.

“Yeah, I had an off day. I know what it is. I didn’t sleep well the night before and should have drunk more water. Won’t happen again.” He began the negotiation. “Last year, you struggled to get to C3 before ending the expedition. What did you learn from that experience?”

He sat back in his chair and took a long drink of coffee. He debated if coming back only ten months after his attempt last year was too soon. Did he really have enough time to recover? He talked to his friends and the company he used last year. All said he was taking a chance at his age. He was with a different company in 2020

He came back from his 2019 trip beat up – physically, mentally, and emotionally. He had trained hard and thought he could summit but discovered he had seriously underestimated what it takes to climb Everest. He knew that only about 40% of those who get above base camp, go on to summit. He had gotten tot he top of Denali and Aconcagua plus Mont Blanc, the Eiger, and Matterhorn a decade ago. He kept himself in good shape, worked out regularly, but was it good enough?

“OK, let’s see how you do on this rotation to C1 and 2. I’m not going to put any pressure on you with climb times. We will know if you can do this or not. And to be clear, you can’t go for the summit, if I think you are in danger. OK?”

He went back to his tent conflicted. Should he give up now, keep going, try harder? “I know what I have to do. I need to climb smarter, not harder.” With that, he began to develop his strategy.