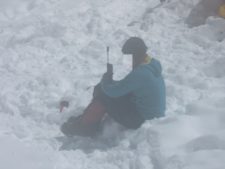 Now at Camp 2, 21,000-feet, the team begins to adjust to the extreme altitude. There is no way to avoid acclimatizing if you want to summit Everest, almost 8,000 feet higher.

“OK, your job for the next two days is to make as many red blood cells as possible,” Guide told the group with a silly grin on his face. He was starting to relax as the group bonded. Being high on the mountain, he was in his element. This was his house, his church, his life.

While tired, the entire team felt confident. Most took between three and four hours to trek from C1 to C2. Now the real work began, the process of acclimatization. Just as they arrived at C2, a helicopter rescue was underway. It’s becoming more common to see a helicopter at C2, despite the extreme altitude. They didn’t know who it was or what the problem was but watched with care as it flew away.

“So, what’s the secret?” Dutch asked the group. “No secret, no tricks, just let the body do what it does naturally, adjust to less available oxygen,” Buddy responded. “Correct; however, there are several ways to accelerate the process,” Guide chimed in beginning a tutorial.

” ‘Acclimatization’ is a strange word that evokes a lot of emotions from many people. Fundamentally it means adapting the human body to an altitude where it was not designed to survive. Even though the percentage of oxygen in the air on Everest’s summit is the same as on a beach in Rio, there are fewer molecules available to inhale. That’s because there is less atmospheric pressure; thus, the oxygen, nitrogen, and carbon dioxide molecules spread out. It’s the opposite of what a diver experiences with the pressure increasing as a diver goes deeper. She feels more weight, more pressure, whereas a climber has less available oxygen. That’s why it’s called ‘thin air.’

At this point, everyone was paying close attention. “So that’s why I’m out of breath!” Dutch joked. “No, it’s because you smoke! I saw you vaping in Kat!” Old Man shot back. “That was medical,” Dutch said with a smirk. 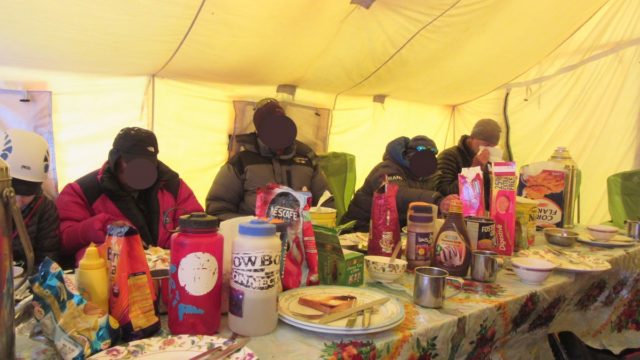 “What happens in our bodies to adjust to this problem?” Snorer asked. “On Manaslu, I felt OK until I got to 23,000-feet, then I felt like I couldn’t get enough air, no matter how slow I went.” Guide thought for a moment, then speculated, “Maybe you weren’t as acclimatized as well as you should have been.” Snorer looked back, “We did go up pretty fast.”

Guide continued, “Right now, here at Camp 2 at 21,000-feet, our bodies are changing. Over the next few hours, the hormone erythropoietin that is responsible for creating red blood cells kicks into high gear. At the same time, our blood plasma goes down, so the percentage of reds goes up in our blood count, and that’s what we want! After a couple of days, we are pretty much adjusted, short of staying here for several weeks, to the current altitude, so that’s why we stay here at C2 for two days. We are putting money in the blood bank on this four-day rotation.

There is a bunch of other stuff going on, like our heart rate increases, so does our breathing rate, and we pee a lot to get rid of the extra CO2 we create. Because of that pressure difference, it’s harder for our system to get oxygen into our muscles. Speaking of which, they start to lose mass. Also, our VO2 max goes down. “Mine can’t go much lower.” Old Man said with a sigh. “Yes, it goes down with age.” Guide said, nodding his head.

“Is there a way to accelerate this process, make it shorter?” Boyfriend asked. “I struggled on Denali, about where we are now. Hey, what about those tents?” Loner looked up. For the first time, he seemed engaged in the conversation. “I slept in one for the past two months.” Everyone turned their heads in unison, hoping he would join the group. “I set the generator to simulate 20,000-feet. It is different than what we feel now with fewer molecules, the generator changes the ratio of oxygen and nitrogen, but still, like Guide was saying, my hematocrit levels went up. I feel good now. I hope sleeping in a plastic bag for two months was worth it. My ex-girlfriend didn’t think so.” Dutch looked at him, “You had a girlfriend?” Everyone laughed as Loner shyly smiled. 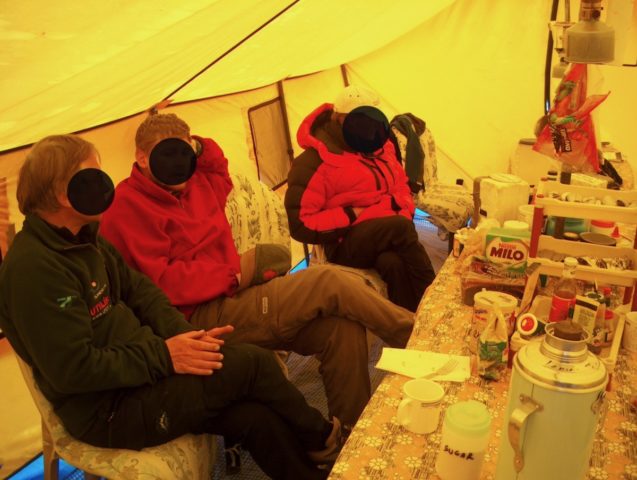 “We go on Os above C3, right?” She asked, anxious to leave the group and call home. “Right, we sleep at half a liter a minute at C3, then climb to the Col at 2 lpm, then crank it up to 4 on the push.” We used that formula for a long time, and it works well. Old Man looked away. He had bought the extra oxygen option so he would almost double those flow rates. He had decided this was his last chance and was going to use every advantage he could find.

“OK, that’s it for tonight. Tomorrow we go to the base of the Lhotse Face for an active rest day. The key to maximizing our acclimatization right now is to number one: hydrate, hydrate, hydrate. Drink as much as you can, especially overnight. I want your pee bottle full, if not running over in the morning. Second, eat as much as you can manage. The best way to not summit is to lose too much weight, so eat! Our cooks are great, and they will give you all you want. Oh, there is plenty of water, so don’t worry about that either. Finally, we must stay active to reduce the lactic acid build-up that comes with all those changes we discussed and to keep our cardio working and adapting. OK, good night, all.”

Guide left the tent, Dutch and Loner, tentmates, left as well. Old Man, Snorer, Couple, and Buddies stayed behind for one round of cards. “Not tonight, I’m off to call home.” She said, zipping up her down jacket and taking her sat phone out of the pocket. It was only 7 pm, a bit too early for bed but she really wanted, no needed, to hear her families’ voices. 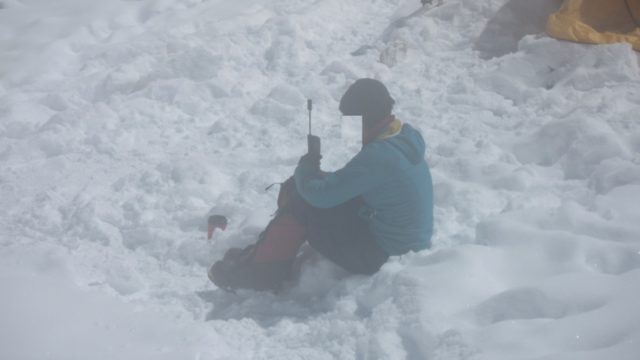 “Hi honey, we miss you so much. How are you? Where are you? ” he answered the phone recognizing the 13 digit phone number. “At Camp 2, got here today. I’m good.” He sensed something different in her voice. She was 45, and they married in their early 20’s. Now with two children plus her mother living with them, their lives were busy. She was the primary breadwinner for the family, but Everest had been her dream. He supported her in all ways, knew her well, and now he was worried.

“Tell me, tell me everything. How are the kids? I want to talk to them. How are you? I miss your smell at night. Honey, how’s mom?”

References for the acclimatization discussion: