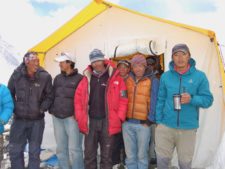 Living for the season at 21,000-feet, the Cooks, are the backbone of any Everest expedition along with the Climbing Sherpas. Our fictional team is busy creating red blood cells as they spend another night at C2.

Meanwhile in the real world, China Daily is live-streaming a video of Everest from the Tibet side using the new 5G setup. Not much action but kind of interesting to watch the sunset and the stars and meteors at night. In honor of the first Northside summit 60 years ago by a Chinese team, there is a Chinese team climbing Everest this spring season, 2020. They are the only ones there.

“I’m hungry,” Bud said as he got out of his tent. “I can’t seem to get enough food in me up here. I know what Guide said about eating and avoiding losing weight, but it’s impossible.”

Members and Climbing Sherpas can burn 6,000 calories or more each day while climbing Everest. It’s almost impossible to replace those calories, so most members lose weight, maybe five to ten percent of their body weight.

“What’s for breakfast?” She asked, poking her head inside the cook tent. “Pancakes, maple syrup, bacon, and toast,” Chuldim said, revealing a huge smile and a gold tooth.

The cooks at C2 are amazing. They are up before dawn and go to bed after everyone else. Chuldim is the chief cook at Camp 2, and Kancha is his “cook boy,” a term commonly used on expeditions. They climbed through the Khumbu Icefall along with many of the other Mount Everest Guides’ Sherpas early in the season to set up camp.

Unlike other big mountains, for example, Denali, Cho Oyu, or Kilimanjaro, the camps above base camp are minimal, no tables, chairs or large eating tents. “Why do we have such luxuries on Everest?” Dutch asked Loner. “Because it’s more competitive, and we pay for it,” he said, looking away. 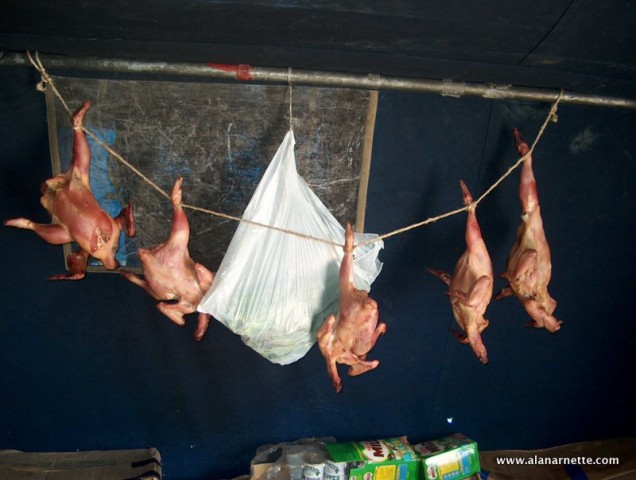 Kancha banged two pans together for what seemed like an eternity, or at least until he saw his members slowly making their way to the large yellow dining tent. He had set the table with plates, plastic coffee cups, and several large containers filled with hot water. While the members were in camp, he would do this three times a day. In between meals, Kancha carried two large buckets that he filled with water or ice and snow and melted back in the cook tent. He would make four or five trips a day to the water hole.

The gas stoves were always on throughout the day. Even though the boiling point of water is lower at altitude, around 180F at 20,000-feet compared to 212F at sea-level, because of the lower air pressure, it takes longer to generate heat thus longer to bring water to a boil. “We double boil the water,” Chuldim said. “Camp 2 is very dirty. Humans are messy and pollute the snow and water, so we boil and boil again to make sure our members stay healthy.”

This extra measure meant more trips through the Icefall to bring up the fuel. Another reason some guides preferred the Tibet side.

Chuldim performed magic with his cooking. Every item from sugar to flour to bacon and eggs had to be carried through the Icefall, all on the backs of humans. Not all the support was ethnic Sherpa, some were Tamang, Gurung, and Rai, but most of the climbing support were ethnic Sherpas.

Long before any member arrived in Kathmandu, the head cooks for Base Camp and Camp 2 created menus. They took great pride in their cooking. From experiences on previous expeditions they knew that members needed more protein than the Sherpas. Also, they liked variety, but this was difficult at C2. Back at base camp, porters brought fresh food daily, but at C2, it was dependent on the Climbing Sherpas to refresh supplies. 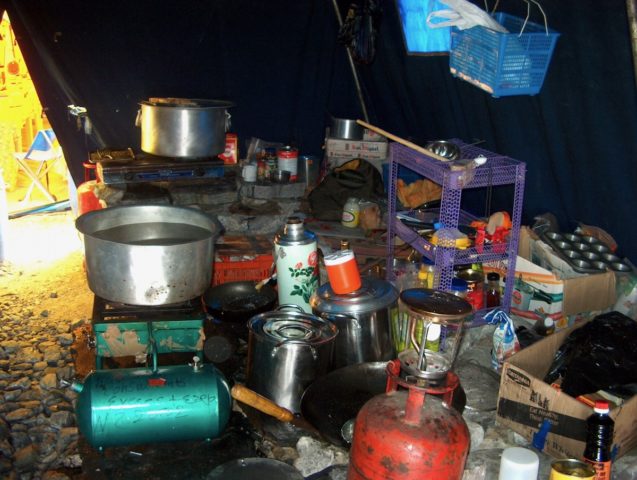 Cooking for the Sherpas was simple in comparison. Breakfast was usually Tsampa, a roasted barley porridge, and syan, a wheat paste, washed down with cups of Tibetan Tea, a black tea with yak butter, and salt.

When climbing, most Sherpas skip lunch because breakfast is so filling. But some carry thick dough-like balls of roasted barley flour mixed with tea, beer, or water to get them by.

“Mingma, would you like a Honey Stinger bar?” She asked her personal Sherpa. “No, no, Dhan’yavāda. We never eat what you do,” he said with a smile. “Yes, and I don’t like Dal Bhaat,” She teased him back. They both laughed hard.

Dal Bhaat is a staple of any Sherpa diet and what most prefer for dinner-helpings, many helpings. It’s simple, a pile of white rice covered with curried vegetables and lentil juice. Maybe a little chicken, beef, or goat, if available, for protein.

Just as the members were finishing up their pancake breakfast, they heard fast-talking and a rustle of gear outside the tent. The Climbing Sherpas were back from a carry to Camp 3 on the Lhotse Face. Chuldim had gotten up at 2:00 am to make breakfast for them. With headlamps on, four of the Climbing Sherpas, left in the dark, backpacks full.

“We carried six tents to Camp 3 and set them up for you,” Phurba told the Couple and Buddies now standing outside. “But first, we had to make platforms for the tents,” he added. “Platforms at 23,000-feet?” Boyfriend said. “Yes, it is very steep at Camp 3, so we take shovels and use ice axes to smooth out an area, so the tent is flat. We sleep there too, so we need to be comfortable.”

Chopping tent platform at 22,000-feet on K2 but similar for C3 on Everest in spirit.

“How much did your packs weigh, Girlfriend asked Pemba, another Climbing Sherpa. “20 kilos. Not too much.” He said with a small grin. “Not too much! That’s 45 pounds! And climbing up the Lhotse Face!!” Sitting on his pack now, Pemba began to describe what a Climbing Sherpa does.

“Our job is to help you climb the mountain. Some people say they don’t need us, and some very, very strong climbers don’t. But this is our job right now. We try to get all the camps set up before you get there-tents and oxygen bottles at the high camps. Oxygen is the biggest load. Each member will use six cylinders, and each Sherpa three, plus we take up spare bottles. Our team will use over 100 bottles, and each one has to be carried to Camp 3 or the South Col before we leave Base Camp for the summit in a few weeks. And we carry stoves and fuel and food to the Col.”

Bud stepped away, coughing again. Pemba observed him closely. “As a Personal Sherpa, we also climb by your side. Yes, you must climb yourself, we cannot do that for you, but we can help. Working with Guide, if someone gets in trouble, our job is to help. Sometimes that means we must ask you to turn around, for your and our safety. I have a wife and four children.”

By now, the entire team had left the dining tent, and Kancha was already cleaning up. Mingma added a thought to the group, “We want all to summit, members and Sherpas. The more summits I have, the more work I get. But we all want to go home to our families, so please be careful.”

She walked back to her tent to get her pack. She and Mingma were going to walk to the base of the Lhotse Face as part of their active rest day. She thought about how much goes on that she never knew, how hard the Sherpas work, and the heavy loads they carry. While She and the rest of the members slept, they went to Camp 3 and back – before breakfast.

She had worked hard to be on Everest and was working hard to accomplish her dream and make her mother proud. But now she had another motivation, to live up to the expectations of Mingma, to make him proud of her.