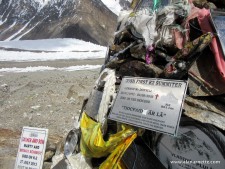 When is it acceptable to show a picture of dead body that is decomposing, ambulance disfigured, or disturbing to a viewer? Especially if it is somewhat recognizable by friends or family, unexpectedly?

In my sport of climbing, this situation has become more commonplace thus I wanted to explore it a bit in this post.

With the Internet, we are exposed, often unknowingly or without warning, to seeing all sorts of graphic scenes from torture to executions to accidents. To state the obvious, some of the most popular movies and television shows exploit this morbid curiosity. Producers and viewers rationalize it as not being “real” since it was on TV or a movie screen.

With so many cell phone cameras taking pictures of every event, there seems to be no filter as anyone with the picture has the capability to post on forums, private websites, sell them to media outlets and more. Sadly, these posts seem to attract the morbid curious thus driving traffic and revenue from advertising to the outlet.

A recent case in point was from the adventure Mike Horn while on K2.

Mr. Horn is a well respected adventure with a huge loyal following. He attempted the world’s second highest mountain and second most deadly in July 2015, K2. He and a small team pushed hard, made a great effort, but were stopped by heavy snow. In fact no one summited K2 in 2015 making it four of out the last six years without a summit thus demonstrating just how difficult K2 can be.

Upon his return to civilization, he posted on Facebook a well done 3 minute video of his effort. As the video showed him discussing how deadly K2 can be, the picture shifted to a decapitated head of a climber for 2 seconds – more than enough time to see a disfigured mass with hair, eyes, a skewed mouth – and the impression of a human who died in great pain.

It was found between Base Camp and Advanced Base Camp suggesting the death had happened higher up on the mountain and brought lower through the flow of multiple avalanches that occurred this year.

Outrage from Friends and Family

A collective cry of outrage began from friends and family of climbers who had died on K2. Their basic argument was that Mr. Horn was insensitive to post such an image.

Sequoia Di Angelo, who lost her brother, Denali, and father Marty Schmidt in 2013 on K2 posted this on her’s and Mr. Horn’s Facebook pages:

You have children correct? Please ask your daughter how she would feel if this was your head decomposing on the mountain and was put on a promotional video from another climbers expedition. Now over 87,000 people have viewed this morbid footage. This horrific image will be indelibly imprinted in my mind. Is nothing sacred anymore?

Another climber, Canadian Louis Rousseau, said this in part in an open letter posted on several websites:

I’ve been climbing for almost 25 years now and my first high altitude expedition was when you did your six-month solo traverse of the South American continent in 1997 about 18 years ago. During all those years, I lost friends in the mountains; I saw families crying for the loss of their own child. I also saw the bodies of climbers and even parts of them. When possible, I put them away so other climbers could not take pictures of them. With a short prayer, it was the I could do to show respect. What you did was the complete opposite approach and behaviour.

Mr. Rousseau summed up what many felt with this powerful sentence:

Imagine if it was the head of your own child lying right there on the snow. People take picture and filming. Did you lost some part of your sensibility with all your popularity and media exposure?

Mr. Horn took down the video, saying he and his colleagues considered the impact but went ahead with the post.  In part, he posted this on his Facebook:

I do value everyone’s opinion, being accused of being disrespectful towards the dead and their families is, of course, a matter of opinion. However, I do apologize if I offended anyone who lost loved ones and do not see life, and death, in the same way as I do. So we have removed the video from Facebook.

I learned years ago that if you really mean to apologize, you never use the word “if”. Then he went further to justify his decision to post the video in the first place:

When I die doing what I love, I die a happy man. My daughters and family will be happy for me, my spirit leaves my body that becomes old and useless and when my spirit is released it will roam the world with freedom and are finally released from the body that ties me down.

Mr. Horn, sponsored by Mercedes Benz, has over 115,000 likes on his Facebook page and receives global publicity during his adventures from a large and loyal set of followers. His video had received thousands of likes and shares before it was removed.  The horse was out of the barn.

His “apology” received 3,618 likes and was shared 195 times. In reviewing the 267 comments, about 170 were supportive of Mr. Horn’s video, 60 were negative and the rest made no sense to me as they had not seen the video …

These are few of the more thoughtful comment and are representative of the many:

Mr. Horn is far from the only recent example. After the tragic April Nepal earthquake, one guide posted pictures of dismembered bodies on his website, complete with names of the victims. He took it down after receiving many comments as to the inappropriateness of the images.

Simply Google “dead bodies on Everest”, or any other mountain, country or highway you want, and you will be rewarded with multiple hits that will satisfy your curiosity and, hopefully, make you sick to your stomach.

Serious newspapers, magazines and most television websites will often not post graphic pictures following a very loose code of ethics but many choose to and are rewarded with large ratings. The Internet has no rules thus it’s up to the author to demonstrate sensitivity, respect and taste.

The only taboo area that has consensus is around showing the faces of children.

In 2012, I  wrote an article about bodies on Everest after the respected Smithsonian did a blog post with links and pictures of dead bodies. I primarily addressed why the bodies were still there.

With Mr. Horn’s decision, I was encouraged to rethink the appropriateness.

I fully agree that mountain are dangerous, the risk is evident to the climbers and families and consequences are real. I fully understand that if you die on the mountain, your body may be left for future climbers to step over, bury, or exploit for their own personal gain. I get it, and there is more.

K2 has seen over 85 deaths, Everest, 250, Mont Blanc, 2000 and on and on. To feel the need to show a picture of a corpse to “to show the reality.” as Mr. Horn declared, is naive at , exploitative at the worse. And in my opinion, inexcusable for an adventure of his stature. For Mercedes Benz to allow this is suspect at . Have you ever seen a Mercedes Benz commercial with a mangled body hanging out of their latest car to denote the “reality” of how accidents happen?

We don’t need to see a burned hand to understand a fire can cause damage.

Sigh, but this is that age of sensationalism over the top. Freedom of the press. Freedom of speech, Freedom FROM taste.

Perhaps showing “shock” video and images is useful in a controlled environment like a driver’s education course for 15 year-olds to force teach the concepts of not texting while driving. But even then, I personally don’t think it is needed.

The old adage in journalism is “if it bleeds it leads” and the only rules in media, both public and private, are ones that each individual follows according to their own morals, conscience and experience.

I suggest asking yourself how you would feel about seeing a decomposing image of your mother on the front page of your local newspaper, or on the main page of a website. You might be fine with it as it shows the “reality” of life and death.

However, your choice is not the choice of all and to make your choice without considering the impact on others is selfish, arrogant and destructive.

Our society has many serious problems. This is not the most critical but it is important. I invite my fellow “adventurers”, and anyone who has a choice, to exercise sensitivity and judgment when creating or perpetuating sensational headlines, images or stories. I especially invite editors of the popular adventure magazines and websites to show restraint and taste. One day it may be your relative on your cover.

To be clear, Mr. Horn is an amazing adventurer, deserving of all the respect and praise he receives. In my opinion, I believe he made a serious judgment error in this specific case. We all do from time to time and I applaud him for taking the video down even with his conditional apology.

In the end it reminds of something I learned as a child:

Just because you can, doesn’t mean you should.

Should Mike Horn have shown a decomposing, decapitated head on K2 in his Facebook Video? (pick 2)