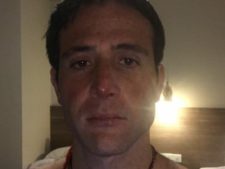 Alex Txikon’s team went through quite a bit of drama on their first summit push from hurricane winds at the South Col to an injured Sherpa and an unexpected trip to Kathmandu for the entire team, apparently against Txikon’s wishes.

All that said, the team will return to Everest Base Camp this upcoming week and push once again to stand on the summit of Everest in winter, without using supplemental oxygen, before 20 March, the end of winter.

His team consists of Aitor Barez, the expedition movie director and Pablo Magister who is the cameramen. The expedition is being supported by Seven Summits Treks. There have been Sherpas climbing with them – 2 ice doctors: Nima y Ghense,  Seven Summits Sherpas: Norbu, Nuri, Chhepal, Furba, Lakpa yPemba. Five Sherpas are reported to be joining the summit bid. 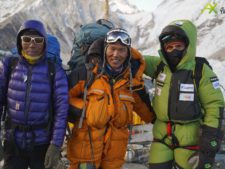 Looking at a 14 February summit day, Txikon, and Seven Summits Sherpas: Norbu, Chhepal left base camp on 10 February  for the summit push arriving at Camp 2 in about 8 hours. The next day, 3 more Sherpas, Nuri, Furba and Pemba, joined them. They reported extremely cold still air temps in the -20F to -30F range, without windchill.

They left Camp 2 to establish High Camp at the South Col and began to experience even worse weather -45C/-49F air temp with 60 kph/37 mph winds. This puts the wind chill at -70C/-95F. Skin will instantly freeze in those conditions and even the world’s best down suits the wearer will soon become chilled beyond recovery. Given they are climbing without supplemental oxygen, the risks dramatically increase.

They pushed from Camp 2 directly to the South Col, fighting the wind on each step. At the South Col, the high winds made it impossible to set up a tent.

They arrived without sleeping bags assuming a short stay in the tent before pushing for the summit. The climbers were becoming dangerously cold. As they struggled to establish camp, the wind broke a pole sending Txikon searching in tents from last spring’s expeditions for a spare. He finds not one but two dead bodies in separate tents. He didn’t identify them.

After only half an hour, with harsh winds making establishing Camp 4 impossible, they all retreated to Camp 3 for a short, cold night then down to Base Camp. But while on the Lhotse Face, an avalanche of snow and mostly falling rock, hits the team sending Txikon sliding hundreds of feet and injuring Sherpa Chhepal.

With Chhepel injured, Seven Summits Treks orders a helicopter and the entire team is transported back to Kathmandu. Reports are confusing with some saying the summit effort has ended, others saying it will go on.

We have problems with the local agency. I have left my equipment at the Base Camp with a support person, and I go down to Kathmandu to find a solution. I assure you that I feel very strong and I do not want to leave; Everest is waiting for me! Thanks for all the strength I am receiving, every day, from every corner of the world. You are my motivation!

The difference was between Mingma, one of the owners of Seven Summits Treks and an extremely accomplished mountaineer and Txikon himself. Mingma, protecting his employees most likely felt the conditions were too dangerous for another attempt, especially given the rockfall. Txikon, following his dream, was willing to take more risks.

After a meeting of Mingma, Txikon and the remaining Sherpas, it was agreed to return to Base Camp this upcoming week and give the summit another attempt. 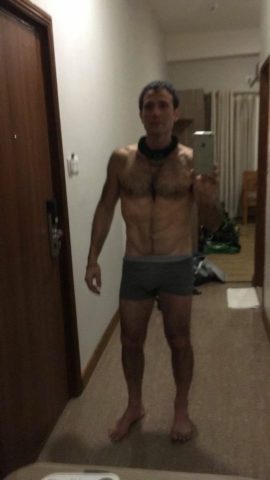 This is not over … we’re back! When we arrived at Kathmandu, we have been welcomed by Mingma, the agent of Seven Summits Trecks, and after meeting we decided to continue with the expedition, as before, since my Nepalese partners are willing to continue with me in this adventure; But for it, they need to recover and rest from the hard working days that I told you in my last report. Next week we will return to Base Camp, stronger than ever, and with all the experience acquire In all these weeks If you follow your dreams, everything is possible. Let’s go Thanks to everybody

Txikon posted a ghostly image of himself saying he lost 12kg/26 pounds on his already lean frame.

It remains to be seen of the weather cooperates this time. As this forecast shows, the SUMMIT winds are forecasted to remain high with extremely cold temperatures over the next few days, almost identical to the conditions that stopped the last week.

This is the latest from the computer model from Mountain Forecast for the summit of Everest: 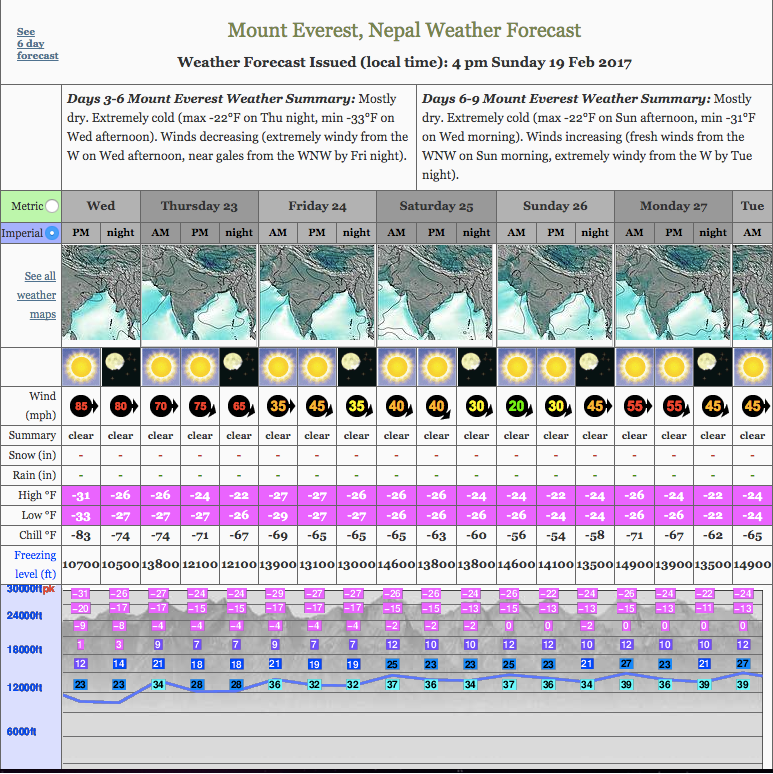 Again, follow their ascent from his GPS tracker. Warning, this system has been somewhat unreliable throughout their climb.

Best of luck to Alex and team. The whole mountaineering world is pulling for their safe ascent, summit and return.