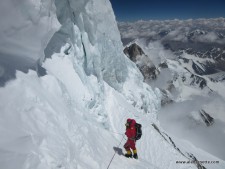 Perseverance and courage has paid off for Mingma Gyalje Sherpa’s Dreamer Destinations’ team. They put 12 people on the summit of K2 – the first summits since 2014. There was another summit of Broad Peak and Russell Brice, announces he’s ending his guiding career.

I have written a lot this season about risk tolerances, differences of opinions and the willingness to continue when others turn back. So in that environment, Minga deserves tremendous credit for showing the leadership skills to push his members to the summit in what other highly experienced operators determined unacceptable conditions.

As I outlined in the previous post the Sherpa on this push were highly experienced with over 35 summits of Everest between them.  There was several feet of fresh snow so the Sherpa’s strength to break trail was required for anyone to summit this season. They were the engine behind this summit train. They started with 9 Sherpas but only 7 summited.

A sincere congratulations to all these climbers.

They spent over 16 hours to reach the summit, an extraordinarily long time. In 2014 we took 8. They summited at 4:00 pm local time and descend to Camp 4 for the night. They hope to get to base camp on the 28th.

Icelander John Snorri Sigurjónsson  becomes the first from his country to climb, and summit, K2. British-American Vanessa O’Brien will begin to claim that she is the first American Female to summit. Well done to both!

To say the obvious, they now must descend. If the weather remains good, this will take a day or more. To be clear, they are not safe yet, by any measure. The descent from the summit is difficult, arduous, tiring and dangerous, It involves rappelling many sections where you must rig everything 100% perfectly. A mistake will cost the climber their life.

And there were more Broad Peak summits on this good weather day. This time by Chinese climber Mrs. Lou Jing with two Sherpas: Nurbu Sherpa and Sanu Sherpa.

Russ prides himself in reading weather forecast and giving his member the best, safest opportunity to summit and get back safely. It was this study of the facts that lead him to cancel this year’s K2 attempt.

I have know Russ for over 10 years. He is the best of the best. I want to thank him for his tremendous contributions to defining a commercial guiding culture of safety and integrity. I wish him success in his future, including, hopefully, guiding on Everest in 2018!