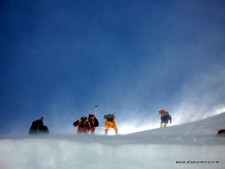 Looks like there will be limited activity on Everest from Monday night to Tuesday, May 14 morning. The weather forecast, from all sources, showed a “squall” coming in and it appeared right on schedule. There were supposed to be 100 climbers attempting the summit early 15 May.

Many teams are now at Camps 1, 2 or 3 or even at the highest camps with limited comms so not much is being reported. But also the weather on Monday has stalled many teams. Jagged Globe reported in from Camp 3 on the Lhotse Face:

Stalled in Camp 3. The team are preparing to spend a second night in their least favourite camp. Along with about 30-40 climbers from other groups they set out for Camp 4 on the South Col after 08.00. However, it soon became clear that the weather was a lot worse than forecast. After 3 hours in strong winds and driving snow they returned to Camp 3. If the weather allows they will try again for Camp 4 tomorrow.

What is interesting is that they posted on previous day,

At last the good weather arrives in the upper Khumbu. A calm night preceded a beautiful morning and the Jagged Globe team set off from Camp 2 at 08.40. PG turned back within an hour and the remaining 3 climbers with David and Pem continued to Camp 3 in hot conditions, taking 5-6 hrs. We believe the rope fixing team reached the summit this afternoon and the route to the top is open. We are on target for Camp 4 tomorrow and the summit on 15 May if weather conditions allow.

Tim Mosedale reports what a changing situation it is upon the Nepal side:

Meanwhile Rupert and I had stayed at Camp 3 on the night of the 13th and he started heading up to The South Col with Jabbu (and me down to C2 logistics to attend to). After a couple of hours it became evident that the weather was back with a vengeance so Rupert returned to C3 for another night. Ironically the late afternoon proved to be quite glorious and this morning it looked to be an almost perfect summit day. But if he’d struggled on to The S Col he could well have jeopardised his bid in the process (most people turned back from their S Col attempts yesterday so he’s not the only sensible person).

Guy Cotter, Adventure Consultants Private, and his member aiming for Everest and Lhotse went to C3 Monday and said it was tough:

An early morning start saw Guy and Kah Shin leave Camp 2 in more cold and windy conditions at 6.40am. They made good time up to the base of the Lhotse Face, though Guy described it when they got there at 8.30am as ‘white out and blowing snow’. Gnarly conditions on any mountain, let alone Mt Everest!

Back at EBC, Luke Timmerman posted “Chilly, clear and calm this am at Everest Base Camp. Our team is patiently waiting for our shot at the summit. We’re all watching weather forecasts closely.” along with a nice shot: 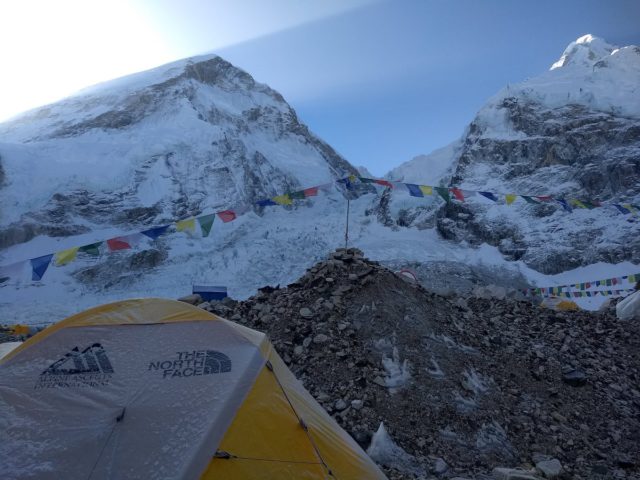 The strong Russian 7 Summits Club also talked about the conditions:

Today, Alexander Abramov called from the North Col of Everest. The first group under his leadership successfully and quickly climbed today from 6400 to 7000. In just 3.5 hours. They were forced to trail, as it snowed a lot. All members are well and cheerful. They send greetings to friends and relatives! Tomorrow morning they will go at 7700.

So goes Everest, or any 8000 meter peak or your own backyard 🙂 OK, so few if any summits from Nepal on Tuesday 15 May and no reliable reports from teams on the Tibet side. Relax and take the day off? However, one thing I’ve learned with 16 years of all thing Everest is never say “take the day off”

I am in contact with {mountain} and monitoring developments so if anything changes, which it will, I’ll update this post.