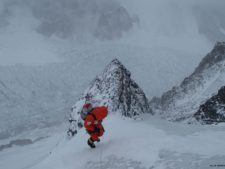 More big winds and snow are causing slow, if any, progress on these two Pakistan 8000-meter peaks. One teams feels they might not go for the summit until early march.

The Kazakhstan, Russia and Kyrgyzstan team has received a boost in funding from their sponsor allowing three new members to join the team. Originally there were 11 members but due to lack of funds it was reduced to 7. Now three Kazakh climbers: Ildar Gabbassov, Ahat Smailov and Amaner Temirbaev will join the team. While they are not acclimatized, they are fresh legs that hopefully can help get the camps set.

However, more high winds that were not forecasted kept the teams working hard today. One group got to C2 and another left gear 5,700-meters after giving up on reaching C1 and descended to ABC. Thus far they have climbed to just under House Chimney at 6,500-meters where they found a lot of trash – tent fragments, oxygen bottles, etc. They assumed it was left by the large commercial teams this past year.

The other K2 team, lead by Alex Txikon, is looking to move up and feels the weather is improving. They currently have gear cached at C2. One member, Polish climber Paweł Dunaj, did attempt to go to C1 today but also gave up with the poor weather. There continues to be no cooperation with the International team for unknown reasons.

Daniele Nardi, and British Thomas Ballard continue to fight the weather – wind and snow. While they make trips to C1 and C2 to uncover and/or look for tents, the conditions are holding them at base camp for the most part. They had established Camp 3 at 5,714-meters with a cache of gear. I continue to expect go/no go decision soon. They are attempting the Mummery’s Spur.