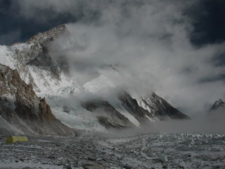 UPDATE 25 February: The weather, while still bad, calmed enough to allow Txikon and his Sherpas to reach Camp 2 and the Kazakhstan, Russia and Kyrgyzstan Team to attempt to establish their C3 at 7300-meters above the Black Pyramid.

Txikon posted: “Cheppal and I have reached Camp 2 at 6650 meters. The weather conditions are bad, it’s very cold and windy. Tomorrow, if the weather improves the rest of the team will go up to Camp 2.”

The International team: “Vassily, Misha, Artiom and Tursunali come to the nest, which was blown off – C2. They have a spare tent with them. Goal for tomorrow is to put C3 on 7300 – in the picture it is the red circle, the deposit was left on 7200, at the top of the Black pyramid”

Hopes for February K2 summits have dimmed as high winds returned to K2 forcing the teams to return to Base Camp. Similar on Nanga.

Hoping to nab the first winter summit of K2, as defined by the end of February and not the Spring Solstice on March 21, continues to look beyond the schedule of the current teams on K2.

Both teams, Spanish/Galician and Kazakhstan/Russia/Kyrgyzstan are working hard to establish (and keep them up) Camps higher than C2. The lower part of K2 while steep is not that difficult to climb, however all bets are off when they step on the Black Pyramid and then approach 8,000-meters near the traditional Camp 4. From there K2 really becomes a very different climb than many other 8000ers. There is objective danger of avalanches, rock fall and most critical in winter, unpredictable winds and storms. They will need to climb hard and fast to stay warm, especially given they are not using supplemental oxygen.

The computer based weather forecast over the next seven days stills calls for summit winds as high as 70 kph/45 mph with still air temps of -40C/-40F making wind chills as low as -65C/-85F.

The K2 team lead by Alex Txikon are at Camp 1 but no higher according to their tracker. They posted:

We have arrived at Camp 1 in about 5 and a half hours from the Base Camp, good sensations. If the weather allows it tomorrow we will continue to up. Thanks for being there!

K2: Kazakhstan, Russia and Kyrgyzstan Team – At C1 but stopped by winds

Both of the sub teams on the Kazakhstan, Russia and Kyrgyzstan team struggled to reach their objectives after hoping to establish their Camp 4 for the summit push. But unexpectedly high winds stopped all progress.

We have a difficult day. The second group descended to the Base camp. The first group encountered erroneous weather forecasts, wind was really until 80 km/h. Ascended to C2 we found that it’s absent. Despite the fact that the tent and things were safely buried by us in last push, the wind had blown away everything … Already in the dark we went down to C1. 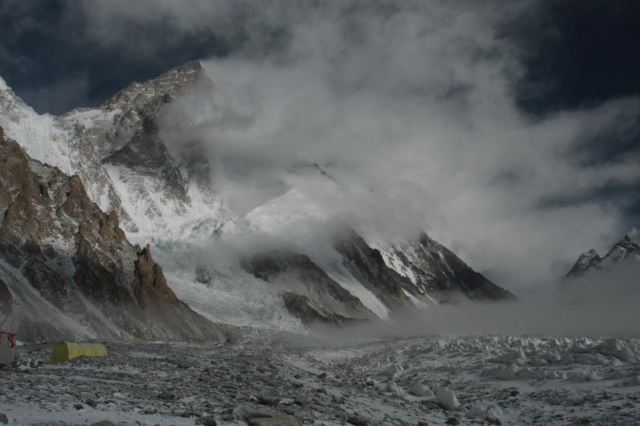 Daniele Nardi, and British Thomas Ballard have left their base camp via the Mummery’s Spur. Their home team made this report on their progress to C3:

Daniele Just informed us that they arrived at about 6300 meters, maybe even something more! They climbed along a fireplace different from the one up with Elisabeth. They went on light, now they’re going down to c4. The weather is not good, there was fog, sleet and wind gusts. The last position that Daniele managed to send us was little lower than the one indicated on the photo, then continued in the climb for another hour, the position in red is therefore an approximation. 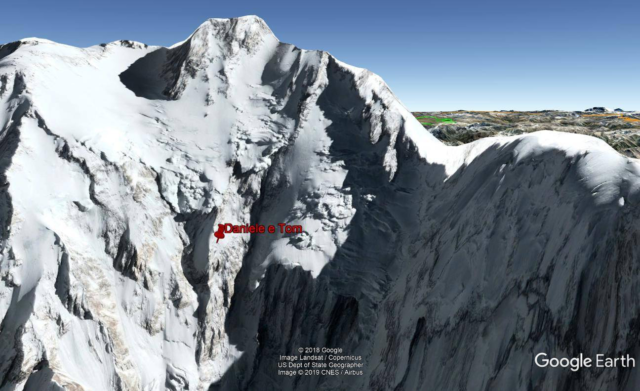