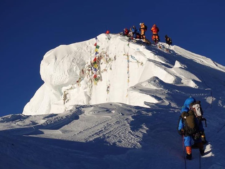 Update 2: Looks like one of the first summits on the Nepal side is from IMG’s Bruce Terry around 6 am

After a huge day on May 22 with an estimated 300 total summits from both sides, May 23 is shaping up to be just as large. There were reports of two to three hour delays near what is left of the Hillary Step yesterday.

It looks like the winds are calm now on both sides on the mountain and may stay that way through Friday when they are expected to pick back up on Saturday, May 25.  Summit Wave 5 is underway

The summit pushes have begun. They are looking to top out on Thursday morning, May 23. Teams on the move include:

The Adventure Consultants 2019 Everest Summit Bid for Alex and Rob has begun! Ang Dorjee called in via radio from Camp 4 to let know that Alex, Rob and the main team are heading off at 9.50pm local Nepal time.  Current conditions at the South Col are calm and clear, and what a fantastic way to start.

Team below Balcony! Here they will change bottles take a short rest!

Greg reports that our second Everest team have passed the Balcony and are moving smoothly. It is a nice night and the winds are light.

We are planning to leave this evening at 9:00 PM for our summit attempt.  Hopefully reaching the top the next morning, which will be May 23rd.  So, everybody’s doing great up here, the team did excellent coming up to high camp yesterday.

Tonight at 8 PM second team will GO for the Summit. Wish them best up luck.

Sam James Taylor has carried on with the team and is currently at Camp 4, exhausted after a few massive days but ready to attempt the final 12-hour push to the summit. 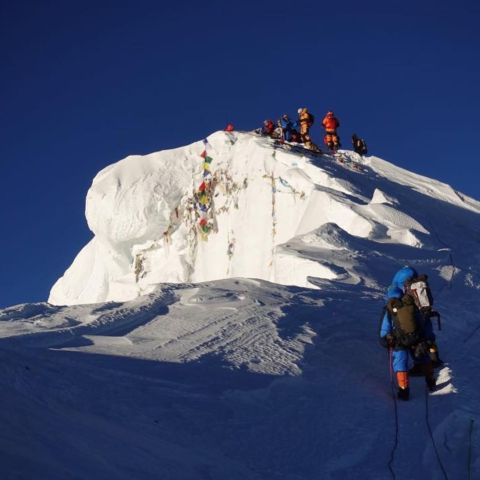 Everest 2019 Rope Fixers on Tibet side. Courtesy of Alpenglow

Usually teams on the Tibet side like to talk about how uncrowded it is compared to the Nepal, but this year with the compressed summit windows, both are seeing similar problems.

Now the first team is staying for the night at 7700. All members came to the camp for 4.5-5 hours.  Everything is OK..  But here is too many people. At least 150 people are going to the summit at the same time…

The summit pushes have begun looking to top out on Thursday morning, May 23. Teams on the Tibet side on the move include:

The whole team are at camp 3. 8,300m. The launching spot for their summit bid.

Flash now at Camp 3 – only 500m below summit… Resting for the upcoming SUMMIT PUSH!