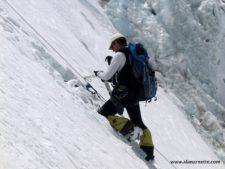 As we end the third week of April, teams are all over both sides of the mountain. They are doing their first acclimatization rotation primarily to the lowest of the camps above base camp. For most teams they will do at least one more of these rotations but to the next highest camp before they are ready for the summit pushes in mid May.

But the key to it all is getting the route set. You read the term “fixing the route” and “fixed ropes” all the time so let’s take a moment while we wait for the climbers to return to base camp over the weekend to explore what these terms mean. 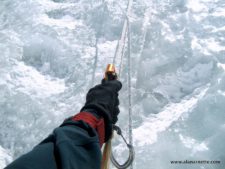 Jumar attached to a fixed rope on Everest

Simply put, a thin nylon rope aka “fixed line” is anchored to the mountain side marking the path aka “route” climbers should take. The rope is about the thickness of your thumb and is attached to the climber’s harness using a carabiner and a jumar. To see how the rigging is set up, Tim Mosedale has a nice description on his site. While it may seem silly that mountain climbers need a rope to mark the trial, there’s more to it than marking the path.

Who Does the Work?

In general the route is set by dedicated teams of Sherpas on the Nepal side and Tibetans on the Tibet side. The Doctors taking ladders into the Khumbu Icefall

On the south side, the Icefall Doctors, a team of eight dedicated Sherpas install aka “fix” the route from Everest Base Camp to Camp 2 in the Western Cwm each year. They first scout the route for the safest and most direct path, then they carry on their backs hundreds of pounds of rope, ladders, ice screws and pickets into the Icefall and the Western Cwm to create the route.

The ropes must be reset each season because the ultraviolet rays from the sun will rot the ropes causing them to fail under the weight of a climber’s fall.  In addition, the route must be maintained daily through the season given the Icefall is a moving glacier and can move up to three feet a day. This movement will cause ladders to drop into crevasses, bend them or move them into a dangerous area. The Doctors inspect the route at least once a day throughout the season to keep it open and safe.

Again, they carry ropes and the anchors on their backs and work together to fix the “fixed rope” aka safety lines to the mountain side. In 2017, a major change occurred when the Nepal government allowed the ropes and anchors to be helicoptered to Camp 2 thus saving an estimated 78 Sherpa loads thru the Icefall. This was a pure safety decision.

On the Tibet side, a dedicated team of Tibetan climbers perform the same duties but they set the route from Advanced Base Camp to the summit and the commercial teams do not participate in the effort. The ladder at the 2nd Step, installed in 1975 is attached permanently but has been replaced a couple of times.

On both sides the labor and material are funded thru climbing permits or collections from the teams. Class 3 on the Geneva Spur

In addition to marking the route, which is extremely useful in whiteout conditions, the fixed line also provides a safety net for a climber in the event of a fall. If the 1996 climbers had been able to follow the fixed rope to the South Col, many would have lived.

The problem that is occurring in recent years is that the line can only support so much weight and it is common to have 30, 50 or even 100 people attached to the same rope. While, amazingly it has never happened, if the climbers were to fall together the lines would fail under the load. So in many high traffic areas, there are dual lines established, one for climbers ascending and one for descending climbers. In 2017, this dual route is established on the Lhotse Face.

There are two routes on the Hillary Step but one is designed for climbers to rappel down, just off the Hillary Step proper, and onto an exposed ledge. It has not been used since it was established a few years ago as it requires skills most Everest climbers lack.

But sometimes there is simply not enough room for dual ropes. Also, remember that it takes human effort to haul the gear high on the slopes and attach it to the mountain. The way the ropes is attached is by using ice screws, primarily in the Icefall or very icey areas but more often by driving an aluminum picket into the snowy mountain side and attaching the rope using another segment of rope. All in all this is very time consuming and it takes days to get the route set to the summit. That is why we rarely see summits in April as the Tibetans and Sherpas are busy establishing the route while the climbers are acclimatizing.

Is this really necessary? Certainly Everest has been climbed successfully without the use of fixed ropes, but this has been by exceptionally skilled and experienced Alpinists like Reinhold Messner. Ueli Steck, attempting a traverse from Everest to Lhotse said he doesn’t need fixed ropes. In 2007, Conrad Anker climbed the 2nd Step on the North side without using the ladder as a test the see if it could be done.

The IMG team reports excellent progress with the fixed lines already to Camp 3 and soon to the Geneva Spur. From here it’s a matter of a day or two to get to the South Col

We received some great news from Camp 2 this afternoon; 14 members of the Sherpa Fixing Team left Camp 2 this morning and worked all day on the Lhotse Face. Through their hard work, they were able to fix two lines (for both up and down traffic) from the bergschrund at the bottom of the Lhotse Face all the way to Upper Camp 3!

The Fixing Team is excited to take advantage of the favorable weather and keep working on the Lhotse Face route, so they are planning an early departure from Camp 2 in the morning to head back up. Their next objective is to push the ropes up through the Yellow Band, over the Geneva Spur, and on to the South Col. This is a steep part of the route, and it will take some work. We are very happy to have these incredible Sherpas up there working so hard.

On the Tibet side, the Tibetan “Rope Fixers” are there and preparing the route to Advanced Base Camp.

Without the fixed ropes, the death toll would be significantly higher. Fixed ropes are used on most 8000 meter mountains, including K2.   On lower peaks including Denali, Rainier or Mont Blanc, it is common for climbers to climb roped together but not on a fixed line. If one person falls, the others are responsible for stopping that fall.

Ropes are a key part of climbing, alpine, siege style, or rock. After a few weeks on the mountain, that rope becomes your best friend, and in case of a fall, it is a genuine lifesaver.