Horribly tragic news is coming in that Swiss climber, Ueli Steck, 40, has died on Nuptse near  Camp 2 off the Western Cwm. I have received 100% confirmation from multiple sources at Everest. I am told his wife has been notified.

His body was recovered and is now in transport to Kathmandu. Durga Dutta Dhakal DoT Director confirmed the incident and saying his body was now at Lukla

This original post was about 1:30 pm Nepal time. Today, 1 May,  I have updated it with the most recent information.

Update: A spokesperson for Ueli’s family posted on 30 April late in the day this official notice on his website:

Ueli Steck was killed while trying to climb Mount Everest and the Lhotse. His family has learned of his death today. The exact circumstances are currently unknown. The family is infinitely sad and asks the media builders to refrain from speculation about the circumstances of his death due to respect for Ueli.

As soon as there are reliable findings on the causes of Ueli Steck’s death, the media will be informed. The family asks the media for understanding that they will not provide any further information at the time.

The Himalayan Times posted the news as well.

I was first contacted by Larry Daugherty climbing with Adventure Ascents about noon, Everest time on 30 April:

Body found at the base of West Nuptse, climber apparently fell alone and unprotected. Initially it was suspected to be Ueli based on clothing and apparently his acclimatization plan..then they confirmed with my team 10 minutes later it was in fact him.

He was reported climbing alone. The details may never be known but often early report have some details incorrect. Two French climbers were also reported in the general area. Climbers at have reported they saw a person falling off Nuptse.

Update: It has been reported that Ueli fell 3,280 feet. Summit Climb made this post on 30 April:

Our team is ok, but just now we saw a climber falling down Nuptse wall. Oh My God Please Help Them!

Update: The UK Gurka team made this post, 1 May about finding Ueli:

As the Gurkha Everest Expedition team were approximately 45 minutes into their descent from Camp 2 on Everest yesterday morning, 30 April 2017, members of the team discovered the body of Ueli Steck in the Western Cwm.

“Our sincere condolences to Ueli Steck’s family and friends, following yesterday’s tragic events,” said deputy expedition leader Major Andrew Todd, this morning. “Our team, who conducted his recovery and heli-extraction from the Western Cwm, are now back at Base Camp.

“Ueli remains a huge inspiration to our team. As we push on, we will never forget yesterday or Ueli’s phenomenal climbing legacy.”

Expedition chairman Brigadier Ian Rigden said: “The Gurkha Everest team is very sad to report the death of the legendary Swiss climber Ueli Steck on Mt Everest. His body was discovered by our team and they organised the repatriation off the mountain. Our thoughts are very much with his wife, Nicole, and we extend our heartfelt condolences to her and their families.”

Ueli had been acclimatizing for an Everest Lhotse traverse. He had already climbed to Camp 2 and then soloed up to the West Ridge. He preferred to take day climbs from EBC to 7000 meter instead of spending nights at altitude to acclimatize. It can be safely assumed he was doing another acclimatizing run but this time on Nuptse. 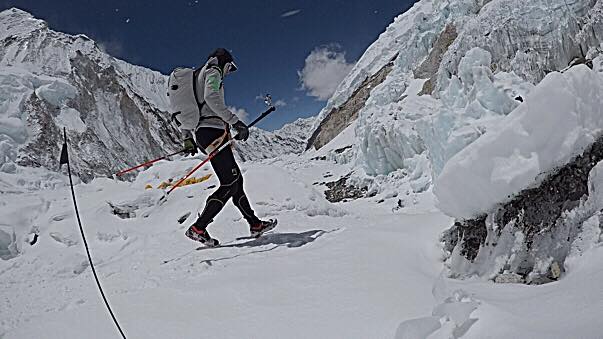 Quick Day from Basecamp up to 7000m and back. I love it its such a great place here. I still believe in active aclimatisation. This is way more effective then spending Nights up in the Altitude!

Update: Jim Davidson, attempting Everest was at Camp 2 and saw Ueli heading towards the West Ridge on a reconnaissance climb:

With heavy sadness, we say goodbye to one of the greatest climbers of our time, Ueli Steck. Ueli died today while solo climbing on Nuptse, just above Camp 1 on Everest. Like many, I looked up to Ueli as an incredible climber. I saw/met him briefly a few times, and he was a cordial and kind man. Last week we watched him solo at 22,000 feet up above Camp 2 on his way toward the difficult West Ridge of Everest. With only my GoPro handy, I took this wide photo of him climbing up. Ueli is circled in red. We watched him ascend for an hour until the clouds closed in. My condolences to his family, friends and many fans. I will always remember seeing Ueli climb up, up, up and into the clouds. 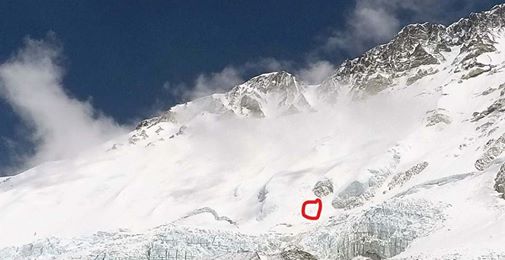 In 2013 Russian alpinist Alexey Bolotov died  while acclimatizing in the same general area. on Nuptse. His climbing partner Denis Urubko said Bolotov was rappelling when his rope was cut by sharp rocks and fell 300 meters down a rock filled ravine.

This is a photo I took in 2008 of the general Camp 1 area with Nuptse on the right. This rock face is similar to the general area where the incident is assumed to have occurred based on eyewitness reports: 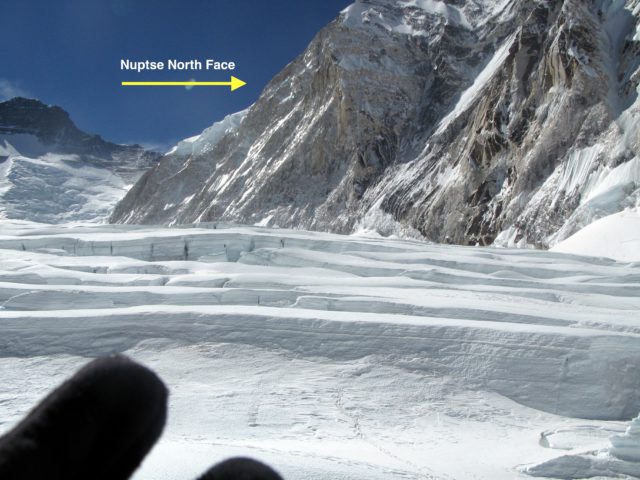 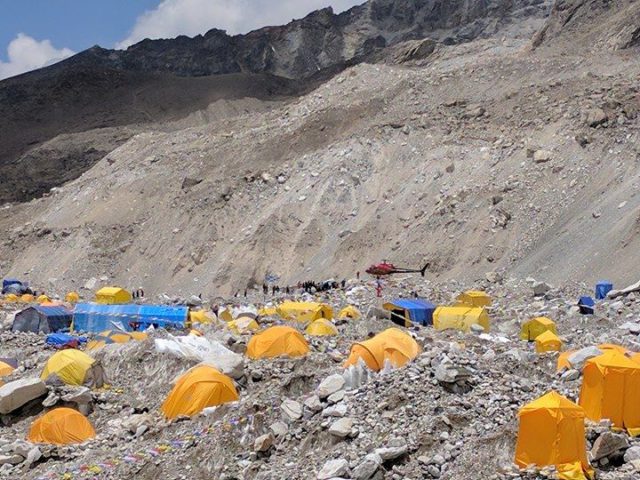 My deep condolences to all of Ueli’s family, friends and admirers around the world. This is a truly tragic day in mountaineering.

Update: And finally, I found some words to express my feelings: 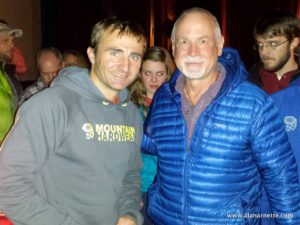 Today the heart of our climbing community has been taken.

I met Ueli a few times and always enjoyed his talks. His humble style, matter of fact delivery on feats that in some case only he had achieved and no one ever repeated, captivated my spirit and feed my imagination.

Ueli never sought publicity, or blogged while climbing, keeping his focus on the task at hand. Only after his achievement did he reveal the details, and the challenge.

Thank you Ueli for showing us what could be done, to live bravely and give back unselfishly with your generous spirit. You will be missed.

This report from Swiss Info: