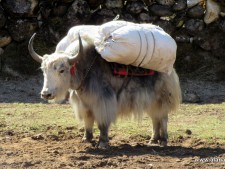 Its tax day in the US but just another Monday on Everest. Activity continues to move steadily forward on both sides of Mount Everest. The camps are filling up, the nighttime noises grows louder as camps compete with their movie speaker systems and generators. The yaks are annoyed.

It looks like some weather may move into the area mid-week delaying the first climbs into the Icefall, but we’ll see how it develops. In other words, all is normal.

Teams are basically resting and doing some dress rehearsals before entering the Icefall on the Nepal side, while over in Tibet most are still driving or just arrived at CBC today.

Several commercial teams are establishing their Camps 1 and 2 in the western Cwm. This is back breaking work for the Sherpas as they carry huge tents that would never be used on Denali or other mountains at these altitudes. But this is part of Everest, providing sea level comfort high in the Himalaya.

A new trend on Everest to avoid the annoying, inconvenient stoop into your personal sleeping tent. These days, the “cool” guides are using so-called “box-tents” where you don’t have to bend over, you simply walk in. Also, some have cots, so no more sleeping on the ground. I’ll take a look at this “Glamping” later but it’s not new as 7 Summits Club broke the mold last year on the North side. Now others are trying to catch up. 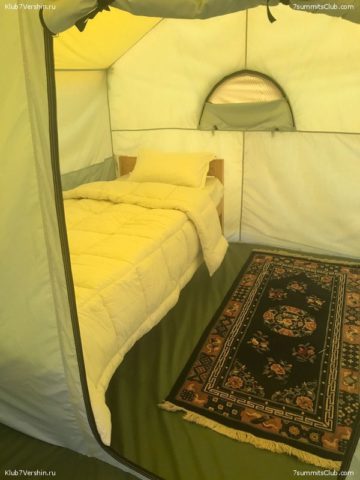 I love the transparency of Chad Gaston as he prepares for the Icefall:

We headed out on the glacier to practice general mountaineering techniques. Repelling, fixed lines ascending, and so on. Half the team is still fighting head colds so we kept it chill. After lunch two fellow climbers and I set out to hike up to 18,000 ft for acclimatizing.

The walk was cold and surprisingly hard so I was wiped out. I made it through dinner and just didn’t have the energy to write my blog. I headed to bed and slept 9 straight hours! I woke feeling great and refreshed. We will head out to practice the skills and techniques we will need to get through the ice fall.

Chad is being real.

The night before last, your lead guide made a grand entrance into the dining tent. With gentile aura that quickly reduced to a stern voice, he made the announcement, no he gave a directive “Be outside of the dining tent no later than Oh Eight Hundred in the AM. We will be going through the training course tomorrow morning. Come with your sharps, and climbing clothes. Don’t be late.”

You wink at your teammate. “What’s with him?” You both shake your head and return to your discussion on civility and authority as juxtapositioned with leadership and humility in the 21st Century.

Regardless of style, his method was effective and everyone was dressed and ready for full body inspection just after breakfast. He arrived in full peacock mode to publicly sniff “Good, let’s go.” and he swaggered off into the cold ice outside of base camp, chicks in tow. It was scene out of Game of Thrones. Hmm, what movie played last night? 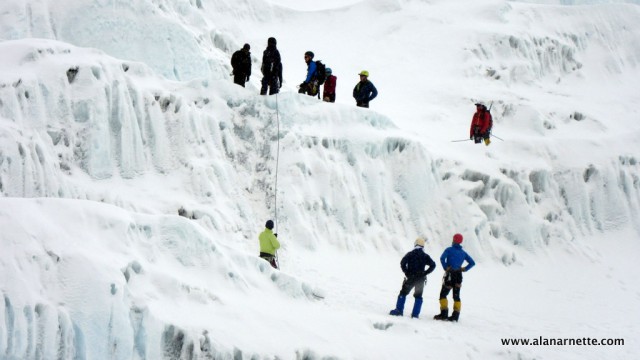 Training for the Icefall

Each year, either the guides or more often than not the SPCC Icefall Doctors, set up what some consider a playground, then some might call it a training ground, others an obstacle course, and a few – a torture corse.

You bristle at the term “training” because that’s what you’ve been doing for the last three years. If someone doesn’t know how to put on their crampons, tie a figure-eight knot or rap down an icy wall, well … well … you guess they will learn today!

You clandestinely glance around at who looks “put together” this morning and who is struggling. About that time you notice you haven’t double-backed your harness. You excuse yourself back inside the tent to correct your fatal mistake desperately trying to maintain your dignity and veil of superiority. Humility comes hard when it does.

The practice day went OK. It was actually useful and you began to ease up on the Major General. You learned a few new techniques, like avoiding front pointing, not to bounce when rappelling and the correct hand to use as a brake. Hmm, “These guys know what they are doing.” you whisper beginning to understand what it means to have invested thousands of dollars and years to become an IFMGA/AMGA certified mountain guide. Your lesson in mountain humility continues.

Later that day, you go for a walk around base camp, but see nothing as you are in deep thought.

“My God kid, you are on Everest.” You say to yourself internalizing where you are.  But echos are still bouncing within your mind.

“Why are going there? Everyone has climbed it.” A few people back home pulled your chain at your ‘good luck’ party just before you left. “There is an escalator to the top where you will find the Starbucks. Even if you summit, it won’t make you a climber, just a mountain tourist, like Messner says. Gee, spend that money on a nice Tesla. Something you can use for years.”

Their voices echo in your mind.

Walking at 5,334-meters/17,500-feet you get out of breath quickly. You have been here for a few days, but not long enough to fully acclimatize. You stumble when the rock path turns to ice, then slip doing your best Olympic ice dancer move to maintain balance. Recovering, you look around. Your confidence takes another blow.

“Oh my.” Followed by a few S’s and F’s that actually make you feel better. But it really doesn’t.

“Why am I here? What am I doing? Yeah, ‘everyone’ has done this. Even a 13-year-old and an 80-year-old. Hell, I’m just  a *0 something and I’m in great shape. Back home I can hit the softball …” and then you cough as the cold air begins its slow assault into your lungs – the Khumbu cough. 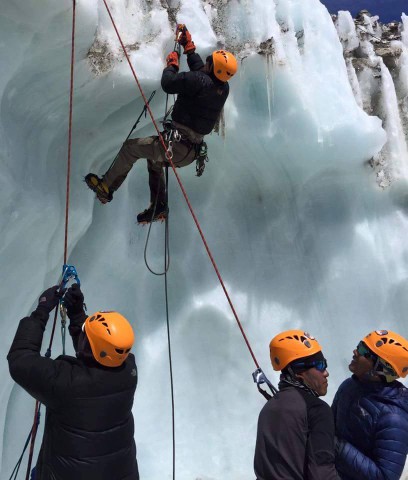 Sitting on a big rock, next to a bigger yak, you look up at the Icefall – the Khumbu Icefall. You have read enough about the “deathtrap” that you are sensitive to it. You know the stats. In 1970, six Sherpas were killed while supporting a Japanese expedition and in 2014, one of the worse days in Everest history, 16 Sherpas died on 18 April when a hanging serac released as the Sherpas were waiting for a ladder to be replaced over a crevasse as they were ferrying loads to the higher camps. And the many other incidents like in 2005 when a westerner fell into a crevasse while crossing a soft snow bridge and in 2012 when a Sherpa fell from a ladder while not clipped in. And in 1972 when an Australian climber supporting Chris Bonnington’s British Everest SW Face Expedition was ferrying loads. He entered the Icefall but was not seen again. 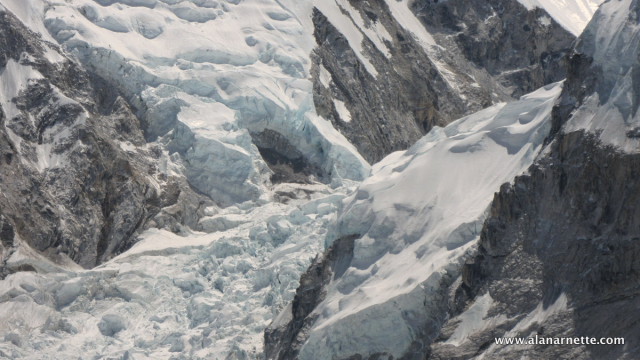 This could never happen to you. You are faster, more knowledgable and have better technology. Then you glance at that serac that released in 2014.

As you left home, you assured friends and family that you would not be “stupid” and take unnecessary risks. And, in a soft voice, you also said. “And there are some things out of my control, regardless of which side I climb. Weather, health, conditions, teammates, equipment failure. And you all know I will do my best to avoid those situations.” The group became quiet.

A sound bring you back to the present. The blond yak next to you let out a huge bellowing snotty snort!  It broke you out of your trance with a shock. “Whoah girl, that was a good one! Buddha Bless!” As you stepped over the nostril discharge, you looked around.

You are at Everest Base Camp. You are in Nepal. You are days away from starting you life-long dream. As you inhale to relieve the lack of oxygen, you let out a small giggle. You begin to smile.

“To Hell with all those critics back home.” You say as your back stiffens and your chest expands. “This is my dream and I will do my best.”

The yak looks at you.

2 Responses to “Everest 2019: Before the First Steps into the Icefall”