Well, the autumn Himalaya season seems to have a second breath on Manaslu. Disaster nearly avoided on Dhaulagiri climbers and a new picture of the hanging serac over the Everest Khumbu Icefall. .  Carlos Soria Fontán at age 80 will make one more summit bid on Dhaulagiri. And, an unclimbed route on Ama Dablam.

Madison Mountaineering‘s team is down to Garret and one client. They are at base camp and seem content to wait as long as their permit allows (which is mid October) to see if anything happens with the serac. Garrett checked in and posted a new picture:

Today is October 5th.  Great day here at Everest base camp — sunny day, great views, nice people around. The Serac is still up there so we’re not heading up the mountian anytime soon.  Everyone’s doing well and we’ll check in soon.  Thanks.

I’m very proud and excited to announce the launch of Mountain Hardwear’s ‘Garrett Madison Collection’, the very finest clothing and equipment for high altitude mountaineering in the world’s most extreme conditions. This gear has been meticulously designed and rigorously tested to the highest standards, for climbers wishing to challenge themselves on the world’s highest peaks, a collaboration between Mountain Hardwear and myself.

A new standard has been set, thank you Mountain Hardwear for seeing the vision and following through on the hard work to create this elite product line, enabling high altitude climbers the best opportunity to achieve our dreams! Link in bio! -some items such as Trango tents and Phantom sleeping bags are available now, other items coming soon! 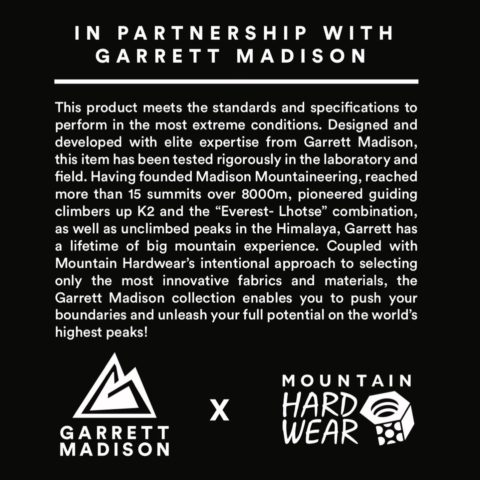 I’ve had many questions and suggestions as to why the serac is not blown up like are done to remove objective dangers and avalanche danger on ski resorts. Well, first off it is in Nepal’s Sagamartha National Park and a World Heritage site so “destroying” the environment is strictly forbidden. Then there is the matter of scale, size, and debris field – it would be massive, perhaps more so than when it simply falls naturally thus creating even more impact to the area below. Also, not sure exactly how one o=would do this. By helicopter or cannon or experts climbing up and placing dynamite? In any case, it would be a logistical challenge, to say the least. But I think the overriding reason is this is a natural occurrence on a mountain side. Climbing is optional and if no one ever climbed Everest by this route again, well the Sherpas and guides and some with dreams would be financially and ego damaged but the world would still go around.

No solid update on Kilian Jornet and his friend Carlos. They are using Gorak Shep as their base camp but have made several climbs into the Western Cwm. Jornet had planned to make a speed climb reportedly via a new route from Camp 2. At this point, if he continues with his plan, it may be a solo effort in difficult conditions.

Ama Dablam – On the Trek

Climbers finally got to Lukla and are now on the trek to Ama Dablam. Joshua Ross is on his way to attempt the standard route while Nima Namgyal Sherpa  posted “Amadablam North Ridge. Not sure if there has been any successful summit after 1979. Some pictures from our sherpa (Nawang Tenjing )who went twice with Himex a few years ago. Another attempt underway this fall.” 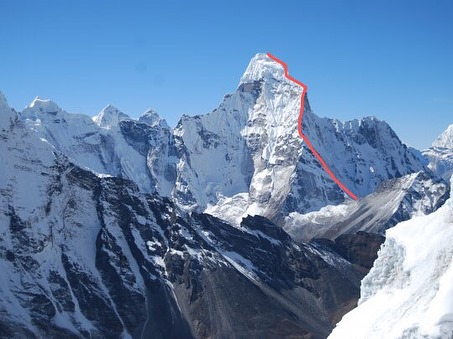 Sergi Mingote  provided more details on his no O’s summit on Dhaulagiri:

The summit day was a day of overcoming and surpassing my limits, but I can finally say that I got it! I’m back in Base Camp. I haven’t explained this yet to my family, but during the descent, alone and when it was almost night, I did not correctly perform a descent manoeuvre and I had an important shock. One of those which teach you! Friends, it will not happen again. I had a hard time tonight. The tiny tent that I had in Camp 3 had been covered in snow and I’ve been shrinking and frozen for a few hours.

The seventh highest mountain in the world is already part of the #14x1000catalanoniaproject. A dour mountain which gave several autumn seasons without letting any climber in the world climb. I am proud to be the third alpinist of the year to get it, and the most important thing, I’m the first to achieve it without the use of bottled oxygen!

In fact, yesterday, only my Chilean friend, Juan Pablo Mohr, and I could go up without oxygen. He went down much later because he got lost during the descent. As for Moes, he had hands frozen, which left him very close to the top. It was a pity

Dhaulagiri, a great mountain, the Olympic Project #pirineusbarcelona2030, a great sports project. We will continue all together this great country project. DREAM BIG FRIENDS

Looks like Carlos Soria Fontán at age 80 will make one more summit bid next week on his 10th attempt. He only needs Dhaulagiri and Shishapangma to complete all 14 8000ers.

Well, I said a few days ago that Manaslu was done but then found out the Russians were there but just as I hit the post button on this update found out they have stopped!: Odd they didn’t bring gear to fix their own route knowing they were coming in after the others would have left ….

Unfortunately, we stopped climbing. There’s no one left on the mountain. Even when we went up to base camp, we met dozens of locals taking miles of ladders, stairs and everything that was left of the expedition. On their way to camp first camp, all ropes were cut off. At Height of 5900, they fell into an impenetrable crack crossing the entire ice. Tried to search for rounds, but without ice gear and ice gear, it was impossible…

(click on cc for subtitles and then the * for English)