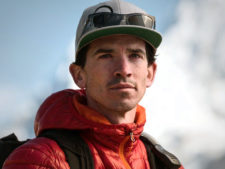 With lots of buzz about the new rules from China and banning tourists from going Everest Base Camp on the Tibet side, I reached out to Adrian Ballinger, founder of Alpenglow, for his thoughts.

Adrian has been running Everest expeditions only from the Tibet side for several years now. He left the Nepal side after the 2014 serac crash that killed 16 Sherpa in the Khumbu Icefall. He strongly believes it is immoral and unethical to put his staff and clients at risk by climbing on the Nepal side and has become a strong advocate of only climbing from the north side until as he adds ” … helicopters are used to overfly the Khumbu Icefall becomes practical (for equipment, staff and climbers).”

This year, he will be back with his Alpenglow Rapid Ascent clients plus providing logistics for a new route attempt.

AA: Hope all is well and your spring Everest trip is coming together
AB: Yep, should be a good season with a couple of unique privates, a small but strong main team, and a cool research project.

AA: Adrian, you have become quite linked to the North side of Everest running trips annually, so what is your view on the recent changes China has imposed on Everest for their side, especially the cap on foreign permits at 300, given the largest number of summits ever by foreigners was in 2007 at 197. Adding in support staff of 176 the total is 373. However, China closed Everest in 2008 to take the Olympic torch to the summit stopping any momentum they had over Nepal. After almost 10 years with foreigner summits well under 90 each season, it has popped back up the last two with 120 each year for 2017 and 2018. So is this a real cap or a marketing ploy?

AB: I think China is looking forward on this. For two years they have been holding conversations with respected guide companies on the North Side asking our opinions on how to improve safety, mountain ethics and cleanliness. While they certainly didn’t make rules exactly as I’d hoped, they are taking first steps. The CTMA, in my opinion, is clear that they want Everest to remain a “sacred” place, and that means environmental and ethical standards. They do not seem focused on how much money they can make on Everest.

Limits on climbers on popular peaks is pretty much standard in the US (Mt.Whitney is a great local example here in CA). I think it makes sense on Everest. I would have preferred it was done via setting experience limits (requiring 8k peak experience for foreign climbers like they do for Chinese climbers would have immediately cut numbers in half) but China went this route instead.

With that said, I have gotten verbal confirmation that the new limit is 300 foreign climbers, not including Nepali and Tibetan Mountain workers.

AA: Is the north side that trashed up, that they need to limit the climbers?

AB: To answer your specific question – yes, high mountain camps on N Side (specifically Camp 2 and 3) are trashed, similar to Camps 2 and 4 on South Side. Since they are on rock, annual snow doesn’t cover the trash (which is mostly old destroyed tents and fuel bottles frozen into ice). I am 100% in support of China’s plan to clean these camps this spring, and then utilize new much higher garbage fees (1500$/person) to staff “rangers” in these camps to ensure teams meet standards and remove trash and human waste. IF this actually happens, it is similar to what Denali now does, and it works. Cheap teams just will not hire additional sherpa to remove trash and all equipment each season if they are not forced to. China is trying to force this and I am fully in support.

AA: Did your team report seeing bodies last year?
AB: Yes – if you know where to look you can still see a number of bodies from previous seasons. They have all been removed from the exact rope line. And of course in 2018 there was also at least one new body actually on the route.

AA: My understanding is that most have been moved out of sight, including Green Boots.
AB: Correct – they are still there and visible if you know where to look or have them pointed out to you

AA: Do you think limiting the number of permits will have any impact on 2019 crowds/traffic/business?
AB: No, because it is my understanding we do not yet reach the cap. CTMA thus far this year has not mentioned any chance of my team’s permit request not being met.

AA: Are there other “quiet” requirements you are seeing that has not been made public?
AB: I heard Nepali companies have been temporarily banned. This is not my ideal solution for removing cheap unethical teams (it should have been done by clear standards applied to both foreign and Nepali companies) but this, in my understanding, was their first attempt at limiting teams that have the vast majority of accidents, leave the vast majority of trash, and tend to not meet common sense worker standards.

AA: Has any of this impacted your business? I’m being told that some specific nationals are not getting permit approvals.
AB: Once again I believe there is “scaremongering” going on suggesting China is unstable and permits may be denied at any time. This is the main way I see it currentIy effect business – potential clients are hesitant to commit to a North Side trip. I always try to remind people that since 2008, China has not closed for the Everest season (unless you count post-earthquake). They have actually had more open seasons over the past decade than Nepal (who has had 2 closures in past decade – after the icefall accident in 2014 and after the earthquake in 2015)

AA: I understand you are attempting a new route this year. Can you share any details?
AB: Alpenglow is only supporting the new route attempt with logistics, I am not part of the climbing team. Stay tuned for details in a separate post?