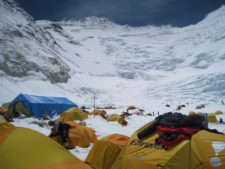 With better weather, our Virtual Everest 2020 fictional team returned to Camp 2 for their rotation to overnight at C3, and get their ticket to the top. But some members are having doubts.

“OK, listen up. Up at 2 am, boots on the ground at 2:30 for Camp 2. Get breakfast and be ready to get to C2 arriving no later than 10 am. This is our last rotation before the summit push, so you need to meet your times in style and perform well to get a chance for the summit. This includes getting to C3.” Guide was firm in his instructions.

Old Man leaned over to Snorer, who was looking at his boots with the thousand-yard stare. “Really? I don’t need the tough love talk before going to bed.” Snorer glanced up and nodded.

But they knew he was speaking the truth. Old Man struggled to get to Camp 2 last time, and he was now full of doubts if he could get to C3 in the allotted time. Last year when he turned back at C3. Then, he was with a different guide who didn’t have “cut-off” time, but they had a very low summit rate and were more relaxed than Mount Everest Guides. Now, Old Man was questioning if he made the correct decision on who to go with this year.

“Just do your best.” Snorer told him as they walked back to their tents.

2 am came early. It was dark at crampon point. Their headlamps lit up their boots as they strapped on their crampons. Following Mingma, She tried to keep up. After only ten minutes, She was already gasping for breath – at 17,800-feet, “Oh my God.” She said out loud bending over and placing her hands on her knees. This was her third time in the Icefall, and it wasn’t feeling any easier. Mingma paused, looking back at her. Quietly, patiently with no judgment in his voice, he asked, “Everything OK, Didi?” She looked up from her stooped-over body and muttered, “Yeah.” She felt defeated in the dark ice walls, low in the Khumbu Icefall.

It was a clear night with a full moon. The Sherpas said this would have been a great night to summit. Actually, someone did summit, the rope-fixing team. A group of six Sherpas got the fixed-line to the summit, a day ahead of schedule. Fixing lines above 26,000-feet is dangerous, difficult work. The Sherpas carry spools of nylon rope plus aluminum pickets, steel pitons, and carabiners to attach the rope to the mountain. It’s hard work, but one that the Sherpas took great pride in performing.

With each step higher the Icefall, She started feeling stronger; the route became familiar. She and the Couple reached the ladders at the top of the ‘fall. She and Girlfriend scaled them with ease. At the top, She paused to catch her breath. Something inside of her clicked and made her smile. Mingma looked at her again with the eye of a caring mother or a stern father. She couldn’t tell the difference but felt better knowing he was watching her closely.

The team stopped at Camp 1, where a large tent was pitched to store gear. Inside, the Sherpas melted some snow for water. The members ate the snacks they brought from base camp and rested for the next leg to Camp 2. The entire team was there plus their Personal Climbing Sherpas and Guide. “Nice job, it may have felt tough, but we cut two hours off from the first trip to C1”, Guide told the team. Snorer smiled at Old Man. Buddy patted Bud on the back.

“It’s going to be a hot one today, no winds, no clouds. So let’s start with our jackets but be ready to strip down to the single top layer when the sun crests over Lhotse.” Guide advised his team.

The trek up the lower Western Cwm was a bit easier this time, this was familiar territory, but Camp 2 was still a mirage. They could see the dark spot to their left that marked the rocks where Camp 2 was situated, but it never got closer. They walked in a single line, all clipped into the fixed-line. No one spoke; all were lost in concentration. 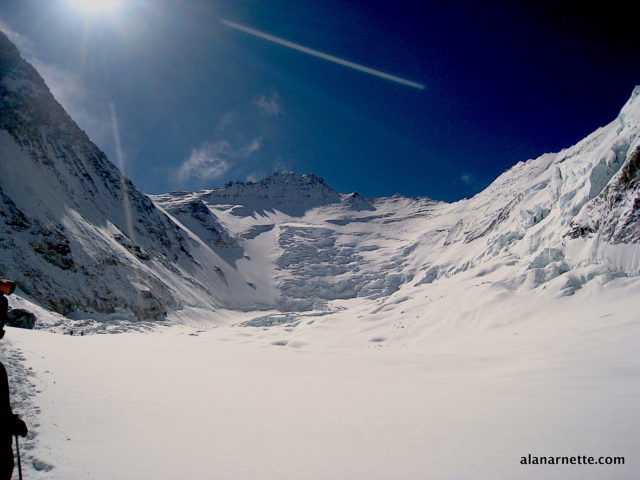 “Can I do this? I should be feeling stronger. What if I’m too slow? Maybe I should start using oxygen, leaving camp 2. I can’t be the last one to C3.” Boyfriend’s internal voices were battling. He shared his fears with Girlfriend the previous night. “I’m afraid.” he began, comparing his feelings to what he experienced on Denali where he turned back at 17,000-foot High Camp. “Yes, but you learned from that and summited Aconcagua, and that was higher than Denali’s High Camp.” She told him, holding his hand tight, looking him directly in his eyes.

The sun was now directly above, no clouds to block it today. He felt like bacon frying in a pan. Taking off layer after layer was not helping. There was no solution other than to push through. The last tiny hill to the gulley leading to Camp 2 felt like the summit. The last hundred meters to Camp 2 hurt. He was tired, hot, needed water, but most of all, he wanted to lie down.

Entering the bottom of the rocky ravine, he sat on a rock. Girlfriend sat next to him. She gave him the last of her water. “It’s not too far now.” She said, reassuring him. As they walked higher, the familiarity gave them strength. All of a sudden he walked faster, he gazed up at the Lhotse Face, sighting the tiny yellow tents that marked Camp 3, their destination soon.

That night at Camp 2, everyone reflected on the day. Dutch and Loner shared a tent. “How long do we have to reach C3?” Dutch asked. “Not sure but probably between six and seven hours max.” Listening in the next tent over, Old Man called out, “Took me ten last year.”

Crawling into their sleeping bags, the internal debate continued. Boyfriend tossed all night. Girlfriend took forever to fall asleep, worried about her mate. The team felt fragmented. Guide, lying on his back, eyes wide open, stared at the yellow tent ceiling as the sun set over Pumori.