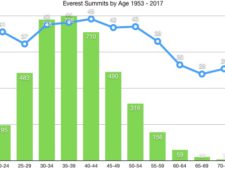 When will we summit?  A question asked a thousand times during an expedition. The answer is more complicated that it appears, and also, reveals a lot about the team dynamics. Our fictional team discuss plans over dinner.

In the real world, Mingma G posted that the “Chinese Everest team climbing on the Tibet side, has the route to the last camp at 8,300m and the Tibetan Rope Fixing Team is working to make it to summit of Everest on 3rd May but turned back due to heavy snow.

“You have a good old fashion upper respiratory infection, or URI, Bud, you know, the Khumbu cough.” Doc told him as he looked at Buddy and Guide. “Let’s start you on a five-day Z-Pack course. No climbing. Lots of rest and fluids.” Bud looked at Buddy. Sometimes the hardest thing to do is to do nothing. Buddies walked back to the camp in silence.

With all the Personal Sherpas and climbers back at base camp, it was bustling with energy again. For the next few days, life would be pretty routine – up at 7 for breakfast at 8. Then perhaps a walk to Camp 1 on Pumori or to Gorak Shep for acclimatization. It wasn’t good to lie around inactive, even though nicknamed rest days, a little activity each day puts more red cells in the blood bank.

Some days, members would wash clothes, read, use the WiFi until lunchtime, around noon. Afternoons ended up being lazy; most people napped, while others visited different teams. The climbing community is quite small, so Old Man and Snorer went for a walk-about to see old friends. 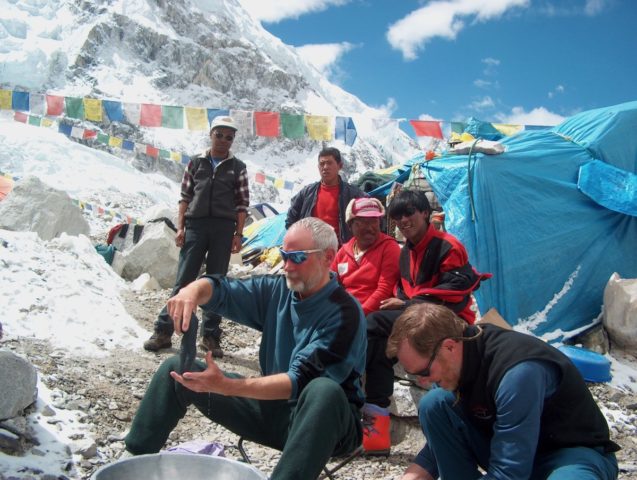 Walking into the South African camp, it was quiet. Old Man approached the tents, “What the Hell! Is every one asleep?” Old Man shouted at the tents. “Howzit,” came an invisible reply, and an old friendship was renewed. They sat in the dining tent for the next three hours talking, laughing, playing a hand of poker, Snorer lost. “Well, we’ve got to get back to our camp. Every day at 4, we get popcorn, and I’m not going to miss it on count of you guys!” They left after a long hug, promising all to be safe on the Hill.

Almost all the team came for popcorn. Only Loner, who never came, and Bud, who was finally asleep, were missing. Boyfriend took inventory of the room – long table, several canisters with hot and cold water, two big bowls of popcorn. All the chairs had been neatly placed, spares along the side of the tent. A movie screen was at the end of the tent. It was comfortable.

“When will we summit? I mean, what day do you think it will happen?” Boyfriend asked the group. Everyone was very optimistic. The weather was excellent, the rope team was at the South Col and should have the ropes to the summit by May 5th. Dutch was beside himself, talking about potential summit days. He looked at her. She had a long conversation with him on the trek. “So, our Queen, what say you?” Dutch put out there in his usual endearing and slightly annoying manner.

She glanced at him and smiled. She had researched this and knew the facts. “Well, the spring season accounts for 96% of all summits on Everest while summer and winter are less than 1%. But the real action takes place on both sides during the third week of May, every year. Specifically, 80% of all Everest summits occur between the 15th and the 27th of May. Slicing even finer, May 21st is THE day when climbing from Tibet as is May 19th on the Nepal side.” 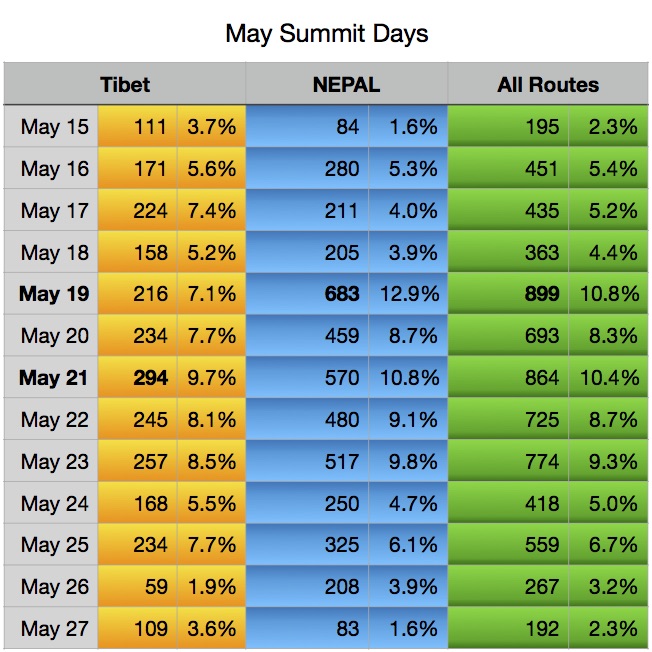 All Everest summits from all routes by day from 1953-2017. source:Himalayan Database

Girlfriend smiled in admiration, “So, May 19th, it is!” Buddy dropped his head, deep in concentration. Dutch took center stage, “Today is May 2nd, so that’s 17 days from now. We have to get back up to C2 then overnight at C3, and back here.” Snorer leaned in, “I think we need four days for the C3 rotation and at least six days for the summit push and return. That’s ten days on the mountain, meaning we have seven days for rest and weather delays. Pretty tight.”

About this time, Guide walked into the tent. He grabbed a clean coffee mug and filling it with cold water along with a healthy spoonful of Tang.

Dutch continued, “If we leave for C3 on Monday, May 4th, and get back here on the 8th, that gives us a week to rest up for the summit push. I think that’ll work. We need to leave for the summit no later than May 13th, if we want to summit on the 19th.”

Guide appreciated the engagement of the team but wanted to regain control. He had seen teams create aggressive schedules, not make them, throwing everything into disarray, disappointment, and too much speculation.

“Nice plan, everyone, but as we talked about before, I prefer to be one of the last teams to the summit. To let the aggressive ones go first, kick in steps, find out the hot spots. Also, we have to give our Climbing Sherpas time to get Os to the Col. They need to rest as well. So if we can summit on the 19th, great, but if its a week later, that’s fine with me. We are here through the end of May. Hopefully, with the ropes to the summit soon, it will give everyone a chance to spread out, so we won’t have those damn queues like last year.”

Buddy liked this plan better, more time for Bud to recover and get his C3 rotation in. He had already decided that he would not go with the rest of the team if Bud weren’t ready.

The conversation continued over dinner. Loner joined them. At the end of the meal, he spoke up, “I like the 26th.” He had been outside listening the entire time.