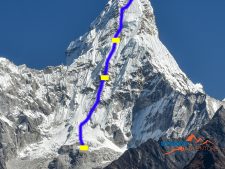 We are in the saddle season for the big mountains – 8000ers post-monsoon in Nepal and anticipated winter climbs this winter. So here’s a quick round-up of some of the more interesting recent activities.

One of the more popular autumn climbs in the Khumbu area, she saw many commercial summits this year but also some surprises. Italian Francois Cazzanelli ascended the picturesque 22,349-foot Ama Dablam in 5 hours 32 minutes and 6 seconds. François Cazzanelli gave these details:

Emrik Favre, Roger Bovard, Jerome Perruquet and I after Tengkampoche decided to climb the 6812m tall Ama Dablam, the Matterhorn of the Himalayan. Emrik and I planned a speed climb from base camp in the same room while Roger and Jerome started from camp 2. I left base camp at 6:30 am November 11th. I arrived in the Yakok camp within an hour, and then I completed the following (cumulated-PL):

While having fun in camp 3 we joined together with my friends. Ekkor Mingma David Sherpa asked for our help, Iranian female client was sick. We immediately saw that he has an odema in Magashegyi. We spent about four and a half hours at camp 3 to help the girl in orientation. Fortunately, with the help of Kailash Helicopter, he was able to save him in a helicopter using a longline technique.

Then we continued to climb down. I got to base camp in 2 hours 17 minutes from camp 3 If the rescue is gone, I climbed Ama Dablam in 8hrs and 7mins.
With the memory of a wonderful climb, I came home from a wonderful mountain, the uplifting feeling of being able to climb in the company of my best friends, and also helped a person in trouble. 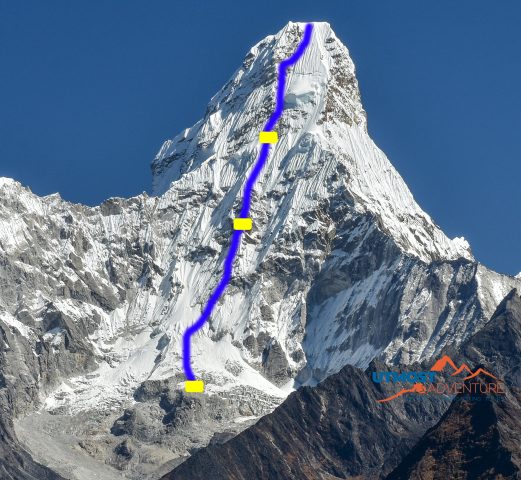 Khabar reported that a massive avalanche off Tukuche Peak, aka Manapathi Mountain of Mustang which is not far from Dhaulagiri, created panic in the village of Kobang. Eleven people were injured in the chaos. The avi lasted 30 minutes and killed multiple yaks grazing nearby.

In sad news, an avalanche off Minbo Ider, 6017-meters, took the lives of three French alpinists: Thomas Arfi, Louis Pachoud, and Gabriel Miloche. Their bodies were recovered a few days later by a search team.

SST said Pasang Nurbu started the summit push from the basecamp and summited Dhaulagiri on 7 Oct at 10:11am, taking a total duration of 23 hours and 11 minutes, a record.

Note: ‘first’ and fastest claims are not verified.

German climber, Jost Kobusch, has arrived in Nepal for his no O’s, solo attempt on Everest’ West Ridge. Please see this video interview I did with him. He now says his goal is to reach 8,000-meters and not the summit. The massive Neaplimoperator, Seven Summits Treks is reportedly running a commercial winter team this year.

As I reported on April 28, 2021, but is now being reported as new news, guides and Sherpas have always speculated on using the flanks of Nuptse to bypass the Khumbu Icefall to reach Camp 1. The Benegas Brothers advocated for this for many years. Now, 70-year-old French alpinist, Marc Batard said he is going to explore that possibility this autumn. He has said he wants to climb Everest next year without Os at age 70. He’s invited Sajid Ali Sadpara, the late Muhammad Ali Sadpara’s son, to come along and also Pasang Nuru Sherpa.

It’s unlikely this will work, but good on him for trying. The slopes of Nuptse are steep, rocky, and as avalanche-prone as the West Shoulder of Everest. The technical difficulty is significant thus Sherpas making “speed” carries to stock the high camps would probably prefer the normal route where they go faster. Of course, if it proves viable, it might be an alternative for expert climbers, but not the masses.

After the Everest recee, Sadpara will meet up with Alex Txikon and Simone Moro for another winter Manaslu attempt.

Best of luck to all and congratulations to those who accomplished their missions.