With good weather on Sunday into early Monday morning, Mt. Everest has become a beehive of activity with at least 50 summits thus far. Teams on both sides are currently climbing from base camp to the higher camps in anticipation of making their summit bids through this week. A small front moved through on Monday afternoon, slowing progress for a day on the Nepal side. All times and dates are local to Everest. See where they are on the Location Table

1st Foreigner Summits from Nepal Side

We have the first foreigner summits of the #Everest2018 spring season. Leaving the South Col around 10:45 pm and it now appears from his GPS Tracker that Steve Plain summited around 6 am Monday 14 May, 2018 thus will break the record for climbing the 7 Summits when he gets back to base camp. He was with Jon Gupta and Pemba Sherpa. He needed to summit by 22 May to break the record. The current record is 126 days and as of today, 13 May he is at 117 days. 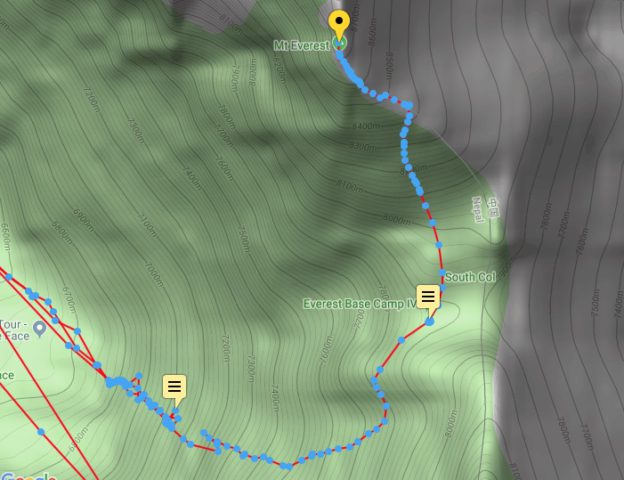 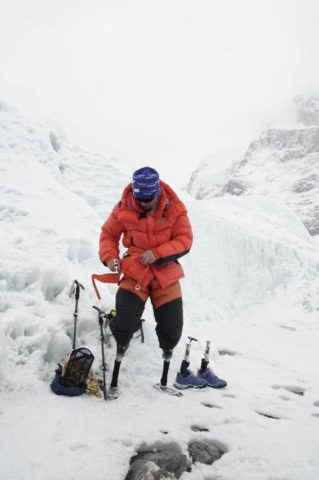 Mingma G Sherpa along with Chinese double amputee Mr Xia Boyu were also going up and left the South Col at 8:00 pm Sunday 13 May hoping also summit Monday morning. They made it!:

Madison Mountaineering has 2 members and 4 Sherpas on the summit at 8:50 am:

This morning Taras Pozdnii, Roman Horodechnyy and Dmytro Semerenko all from Ukraine along with their sherpa Nga Tashi, Mingmar and Lambou Sherpa climbed Mt. Everest.

Ropes to Summit from Tibet

The rope team left Camp 4 on the Northeast Ridge and got the ropes to the summit. Also, Nepali Anish Luitel climbing open behalf of Scouts around the word tagged along with them and became, I believe, the first non-rope team meter to summit from the Tibet side this spring. He carried the 2019 world Jamboree Flag was on the top of the world.

Jagged Globe reports winds are back on South Side:

Stalled in Camp 3. The team are preparing to spend a second night in their least favourite camp. Along with about 30-40 climbers from other groups they set out for Camp 4 on the South Col after 08.00. However, it soon became clear that the weather was a lot worse than forecast. After 3 hours in strong winds and driving snow they returned to Camp 3. If the weather allows they will try again for Camp 4 tomorrow.