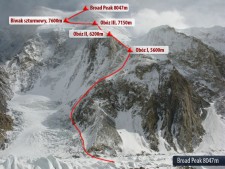 After the tragic news of Canadian climber Serge Dessureault’s death on K2 over the weekend, some good news would be welcomed and we have it with a summit on the difficult and deadly Nanga Parbat. Also, on Broad Peak, a summit attempt was halted due to dangerous conditions but they are going right back up.

The legend mountaineer Mr. Kim Migon has successfully scaled Nanga Parbat dated 9-7-2018 at 8:23am Pakistan standard time. He was with Lu Chung-han and Sanu Sherpa.

This was Kim’s last 8000er. Mike Horn,  Alex Gavan and Tunc Findik, all exceptionally strong and experienced climbers, gave up a couple of weeks ago on NB citing poor conditions. Maya Sherpa appears to still be there.

Austrian Hansjörg Auer posted on Instagram that he, “… climbed the Westface of Lupghar Sar West for the first time. “This ascent is very unique to me, because I was dreaming of it for the last 4 years. I always wanted to know how it feels to be alone in high altitude. And I’m happy that I made this experience.”

Furtenbach Adventures attempted to summit BP over the weekend but stopped short, “Summit bid stopped at 7800m short below the col due to avalanche danger. The whole team was giving all in these harsh conditions. The decision to stop this bid for safety was very clear. The couloir is filled with masses of unsettled snow and this will not change in a few days. Now all on the way down to basecamp. We will see if we give it an other try or switch over to K2.”

That seemed clear enough and a wise decision by the team given all the recent heavy snow. That couloir they mention is well-known for being avi prone as well as harboring hidden crevasses, so I was not surprised they stopped but then this was posted today: “All are safe back in basecamp! Looks like we will give it an other try before we move to K2. Now recovering and refilling” Its very unclear how anything has changed since their attempt two days ago, but I wish the the best of luck. Also it appears several other teams and individuals will be tagging along so perhaps with the increase support from HAPS and Sherpas, they can find a safe route.

With better weather Hungarian climbers Dávid Klein and Szilárd Suhajda went to C2. Their home team reports, “Everything is going as plan. Stay two night in C2 6500 and try to go up to touch c3 or at least to 7000 m but not sleep there.”

Adam Bielecki is also expected to climb in these good conditions as are Masha Gordon and Helias Millerioux, Yannick Graziani trying to traverse G1/G2.

A few other interesting projects on Gasherbrum IV include Italian Hervé Barmasse (Member of the Piolet d’Or Committee) and German climber David Göttler targeting GIV. The Chinese thwarted their plan to attempt the unclimbed North Face of GI when they refused to issue a permit.  On GIV, they want to climb absolutely “clean”, so no O’s, sherpas or camps and emissions, pure alpine style, trying to leave no trace.

Another nice project is from the Basque-Catalan group lead by Oriol Baró. They are targeting the South Pillar of GIV. Baró attempted this route in 2006 with Jordi Corominas but stopped around 7300 meters. This summer he is with three strong young climbers: Marc Toralles, Roger Cararach, and Iker Madoz.

There are no updates on these climbs.

Dawa Sherpa  added that on Saturday, “It was a nice weather today, 5 members and 11 Sherpa are in Camp II and some others parties are at BC and C1.” and “Rest of all are ok and pushing to high altitude, we are planning to make final summit push after 20th July.” Almost every team attempting K2 this summer had climbers at C1 or C2 today.

The Karakoram climbers have enjoyed a nice run of good weather since last Saturday. The next big snowfall is expected on Thursday. If the teams can sleep at 7,000-meter or higher and get back to base camp, then they will be good to go when the summit windows appears, usually in late July.