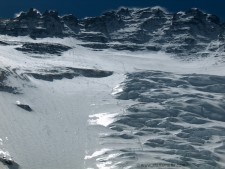 The fictional team returned from Camp 3 at 23,600-feet on the Lhotse Face and decided to go all the way to base camp due to impending weather. Climbing through the Icefall in late morning is never a good idea and She found out why.

Back to Base Camp and A Narrow Escape

The down-climb from Camp 3 to Camp 2 was very fast. They were having breakfast at nine that morning and most of the team wanted to return to base camp the same day. “We’ve got more weather moving in.” Guide announced.” So, let’s pack up. Going through the Icefall in the morning is not ideal, and part of me wants to hold out the storm here at C2, but we made great time this morning, so let’s get going ASAP.”

They returned to their tents and packed, leaving their sleeping bag and extra pad at C2 for the summit rotation.

“How do you feel?” Buddy asked Bud. “Surprisingly well,” he replied. “The climb to 3 was tough, but I feel good now. I’ll feel even better at EBC with all those Os.” 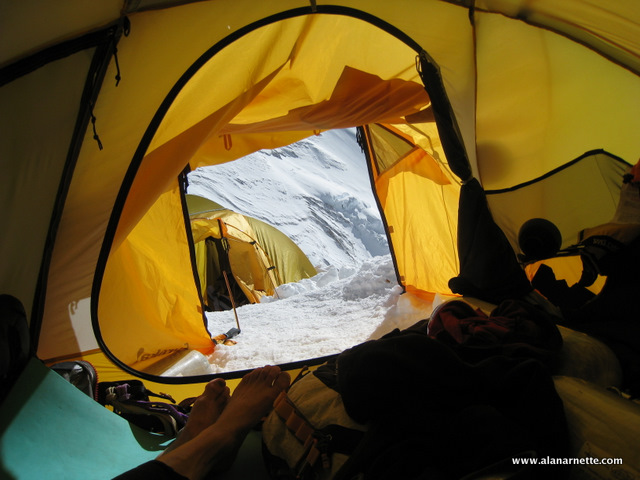 Over in the other tent, the status was not as good. “I feel like Hell,” Old Man told Snorer. “I would rather stay here for another day.” Guide, walking by about that time, poked his head in the tent. “You can do it. You moved well coming down this morning. I know you are familiar with pushing yourself from last year, but this time is different. When we get back to base camp, we’ll have over two weeks to rest up before heading back to the summit. You can go down to Namche if you want, you know – touch grass.” Guide smiled at Old Man. He had grown fond of him over the expedition and wanted to see him summit.

Old Man nodded and continued to pack his gear. His Personal Sherpa, Pemba, came over. “Let me take most of your gear, so your pack is lite.” He said, looking at the Old Man with support, not pity. “Well, that would help a lot.” He replied, handing over most of his gear. Now he only had an extra jacket, gloves, and one liter of water in his pack. “Give me the water.” Pemba said, “I will be by your side the whole way down.” Old Man handed him the bottle.

She was anxious to get down, take a shower, and have a long video call with her family using FaceTime over EverestLink. She felt strong, she felt pleased with her performance. She now felt confident that she could do well on the summit bid.

“You did well,” Girlfriend told Boyfriend as she hugged him. “I guess, but getting to 3 was more than I anticipated. I struggled at the end.” She held him tighter. “But you got there within the time limits and came back today, that’s all that counts.”

Guide walked over to Dutch and Loner’s tent. “You guys ready?” He asked, not looking in the tent. “Might get a bit windy, so make sure you have your shells.” He added, walking away. 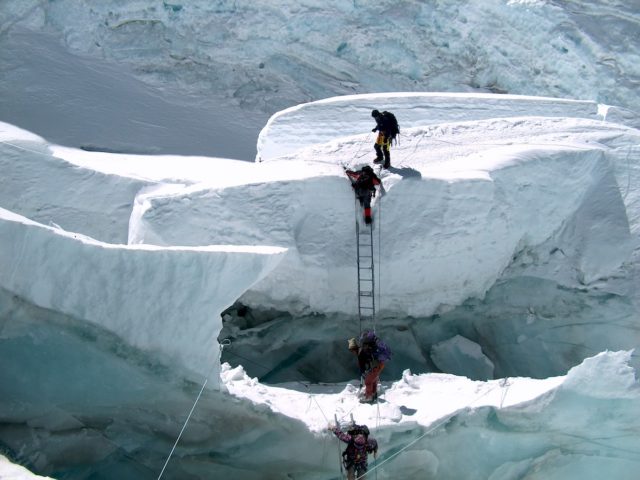 Neither man spoke while packing. Both had come to understand that they were focused on the summit, not making small talk, at least with each other.
Dawa led the team out of C2, once again navigating the multiple shallow crevasses that led to the top of the Icefall and the infamous ladders. They clipped into the fixed ropes and focused on climbing down each ladder—their crampons sending back a reassuring clink with each step.

The team had spread out as they had become accustomed to, but this time Couple and Buddies stayed together.

She and Mingma walked thoughtfully through the maze of towering ice seracs, some as tall as 60-feet. “Avalanche!” Mingma called out. “Off Nuptse.” Everyone looked left to see a falling white wall of snow and ice. It landed harmlessly in a gully between them and the Icefall.

They continued at a brisker pace, as it was approaching 11 am, and the mid-day heat would heat up the dangerous seracs. There was no time for breaks, talking or anything that would slow downward progress. “I’m glad we only have to go through this two more times.” Snorer told Loner as they walked together. Loner looked ahead. 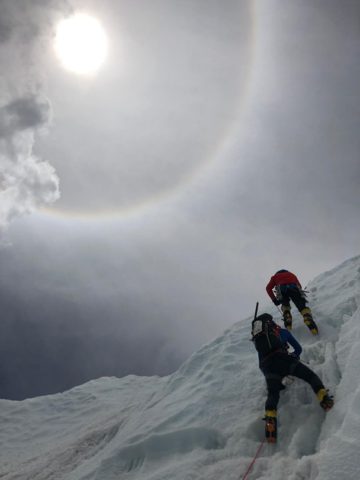 Then they heard it. The crushing sound of shattering ice. It was close, very close. She turned around to see a wall of white powder rushing towards Mingma. “Run!” He called to her. She turned and ran but looked back to check on her friend. By now, he was right behind her. “Keep going!” He shouted. She ran as fast as she dared while still being clipped to the rope.

The velocity of the snow wall slowed as the sound returned to a muffled silence. It had taken less than ten seconds but had taken years off her life. “You OK?” Mingma asked his charge. “Yes, just shaken,” She replied, breathing heavily, her heart pounding. “That tall ice serac fell. The one we’ve been watching.” Mingma said as he keyed the radio to call the other Climbing Sherpas. One by one, they all checked in that everyone was safe.

The route, now littered with sofa size blocks of ice, was still passable, so all the climbers and Climbing Sherpas that day made their destinations. There were over 300 people throughout the Icefall on this Friday.

Dutch approached them quickly. “Are you both safe?” he asked urgently. “Yes, we are fine. Close call my friend, a near miss.” She said softly looking upwards into the frozen maze.

Minga took out his Mala Beads and began praying as they reached base camp and crampon point. She took off her pack and sat down to remove her crampons.

She desperately needed to call home.