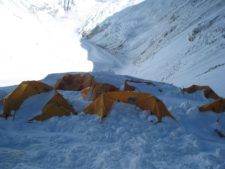 The fictional team experienced an extremely difficult night at Camp 3 at 23,600-feet on the Lhotse Face. The wind and snow pummeled them throughout the night forcing difficult decisions for our climbers.

She and Mingma shared a tent while Girlfriend waited for Boyfriend and Loner for Dutch in their tents. Two hours after She reached Camp 3, the last member of Mount Everest Guides team arrived; actually, Boyfriend and Old Man, along with Guide all pulled in together. It had taken them 8:43 minutes, just under the nine-hour time limit set by Guide. They looked exhausted, so the arbitrary measure of ‘style’ was in question.

But for now, it was all about recovery. One of the best measures of overall fitness is how fast an athlete recovers after a demanding experience. For climbers, that meant replacing electrolytes lost through sweat and calories lost through their effort. Now they needed to be prepared to climb the next day.

Snorer and Old Man started the eating and drinking process, fueled by freeze-dried food warmed with boiled water. What the Hell! I was faster this year.” Old Man said with pride. Snorer politely avoided the fact he was last to camp, again. Buddies, glad to be reunited, also started to eat and drink.

C3 was nestled in a small ice gully; their tents were part of a tiny enclave along with two other teams. The tents had extra ropes across the top to ensure they would not blow away—a prescient measure. 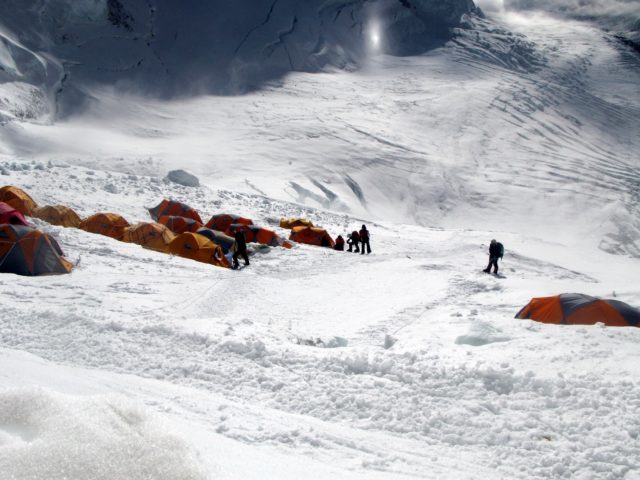 The views from Camp 3 were stunning. Cho Oyu was visible standing high above Pumori that looked large from base camp but now was dwarfed by the 8000ers. The West Shoulder of Everest was visible and they could see parts of the famous West Ridge.

As the sun began to set, the cold arrived along with a strong gust of wind. The sound was unique. She felt like someone had put her in a car moving at 60 miles per hour, with open windows and her head sticking out like a dog. The tent shook. An open flaps hit the tent wall with the force of a passing train.

Tiny unique sounds added to the symphony as snow pellets hit the tent. The full-on orchestra came together in total unison then stopping with the suddenness of an off switch. A storm had arrived. “This might be big,” Mingma volunteered. He had just finished melting more snow for their last cup of hot black tea. “Are we in danger? Should we try to go down before the full storm hits?” She asked tentatively. “No danger, unless our tent gets blown off the Face.” Mingma said with a small grin. She didn’t know if he was kidding or not as the tent walls heaved like the side of a galloping horse.

“You OK?” Dawa shouted from another tent. He had to scream to be heard over the raging winds. Retreat was no option as the storm continued to intensify. They had no choice but to wait it out and hope it would calm in the morning.

Knowing that high winds are a part of altitude mountaineering, She fell back asleep – for 10 minutes. The volume turned back on; now, at the highest level, the wind-battered them over and over and over. She tossed in her sleeping bag wondering if this was a passing event or the beginning of an un-forecasted storm. Their weather forecast has no mention of high winds. As darkness took over their camp, the wind seemed to increase. The schedule became, lay down, sit up, kick the tent walls to remove the gathered snow, repeat.

With wind chills that were at least -50F, surrounded by crevasses on a steep angle at 23,600 feet; the standard practice of shoveling the snow off the tent walls from outside was foolhardy at best. She and Mingma routinely pushed the walls from inside and slept with their eyes open. She opened the vestibule door only to get covered in blowing snow. A small dusting immediately covered their sleeping bags inside the tent.

A short dream told her sleep had come, but with the suddenness of muscle cramp, She tried to sit up only to hit her head against the tent wall. The snow had accumulated on the walls to create a new hard roof that almost bruised her head as She sat up quickly. She stretched her foot out only to discover the tent width had been reduced by another two feet with more accumulating snow beginning to collapse the walls. Despite their efforts, they were losing the battle with this storm.

She listened carefully for the Couple in the tent only a few feet away. A muffled conversation interspersed with an occasional cough told her that they were OK. A similar sound came from the other tent with Buddies. She and Mingma could only hear one another by talking close to each other’s ear. The night continued, it was now 11:47 pm, it would be a long seven hours to the start of daylight, and another hour to start their scheduled down climb to Camp 2. Sleep was measured in minutes.

A short radio conversation with Base Camp confirmed a wind event had hit Camp 2. They didn’t need a professional meteorologist to know this. Apparently it was a ‘micro-event’ which strikes in narrow altitude bands. They were notoriously hard to predict. It crossed her mind as to how long they might spend at this camp. Food, fuel, the condition of the fixed-line, windchill; a million things to consider as another gust pummeled the tent.

Old Man spoke of storms last year when he turned back at C3. He said the mountain was tempering her, not testing. If steel was being made, it was going to be very strong. The biceps of this ironsmith were the size of his thighs as he used a huge iron mallet to hit the tent repeatedly. When would this practitioner tire?

Being so high on the Lhotse Face, the first light from the morning dawn comes later, after six. As dawn shown on the tent, they saw that the snow had gathered over halfway to the top, the side walls were laden with hardened snow. Mingma radioed Base Camp as they checked with their weather forecaster. Return as soon as possible was the salient advice. They thought the storm had passed but were still very cautious.

Everyone booted up as the ironsmith continued his work. Each pause in his work only served to raise their expectation then to have them smashed as the next gust felt even stronger. Mingma went outside to shovel the snow away from the walls and door as the winds calmed for a moment with the breaking dawn.

8:00 am came as they left the safety of the thin nylon walls. One glance around the camp revealed the carnage to the tents. Feet of snow on top of tents, the fabric was ripped to shreds; thankfully, the unoccupied tents were the causalities and not any climbers. The massive gusts returned as they clipped into one of the fixed lines, not buried by the blowing snow. Their down climb began. It was swift. They fought the steady wind, warm with layers of benevolent goose down. 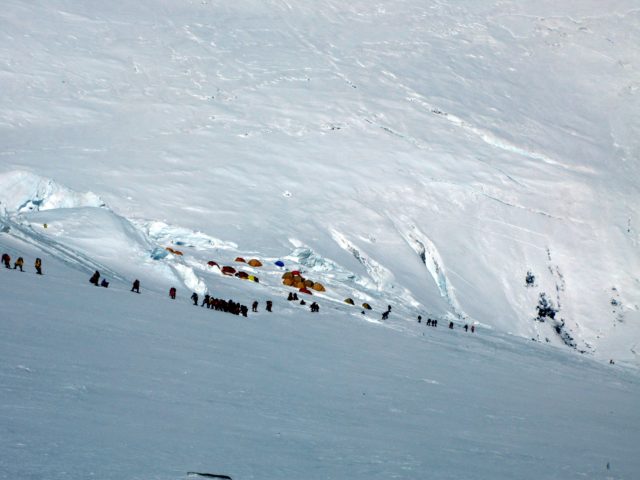 Passing the lower camps, they witnessed even more destruction as they were less protected than their high camp. Only a few heads poked out as they passed. The gusts often knocked them off their line but were manageable as they picked up the pace. They exited the Lhotse Face one hour after leaving Camp 3. Another hour found them in Camp 2. The return was amazingly swift.

Over breakfast, they reflected on the experience. Base Camp asked them to confirm that there was no frostbite – twice – and there was none. She looked back up the Face; She could easily trace their steps, see their camp. She could still hear the wind. Tempered and tested, they had passed.