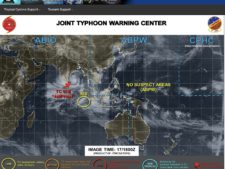 The fictional Everest team is at C2 on their summit push but an updated weather forecast has Guide thinking he made the wrong decision. Plus a video interview with Michael Fagin of Everest Weather about real-world conditions including a developing cyclone in the Bay of Bengal.

At Camp 2 and a Developing Weather Crisis

They arrived at Camp 2 feeling good as one group, except for Old Man who stayed at Camp 1 with Pamba according to plan.

The climb through the Icefall was uneventful even though the temperatures were much warmer than just a few weeks ago. This temperature trend is one of the main reasons people prefer to climb Everest in spring instead of autumn – the days are getting longer, and the temperatures are getting warmer each day. The opposite trends occur in the autumn. Overall since 1953, all expedition’s success rate is 67% in spring but drops to 28% in the autumn. 1

Buddies relaxed in their tent while The Couple stood outside, staring at the Lhotse Face. “This scares me,” Boyfriend said, still suffering from a confidence crisis. “What scares you?” Girlfriend asked, trying to pry out of him the real problem. “Well, the weather forecast is not the best, and I’m not very fast, so put those together, I might get in trouble.” He was now very honest. “The last thing I want to do is to hold anyone up, especially you.” He said, putting his arm around her.

Guide called the group together in the small dining tent. 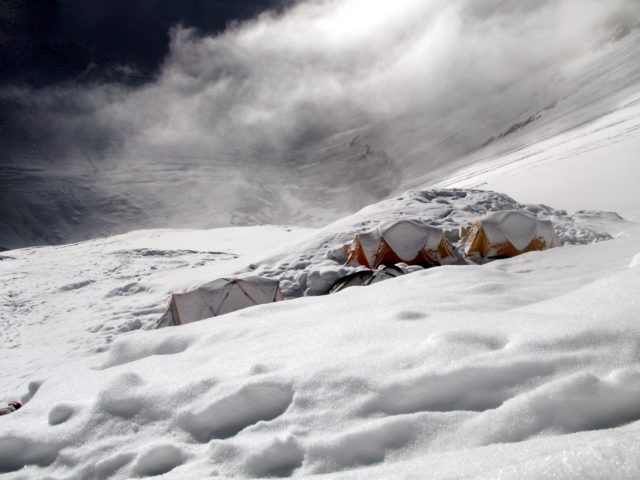 “Got an update from Seattle on the weather. The cyclone has intensified and now has a name, “Amphan.” Snorer looked at Dutch who glanced over at Loner. “Will it hit us?” She spoke first. “How does this impact the summit schedule? We leave tomorrow for C3 and the South Col on Wednesday night for the summit.”

The Mount Everest Guide team was about to experience the most challenging situation high-altitude expeditions ever do – walking the fine line of risk and reward. The decision fell on Guide’s shoulders, but he depended heavily on Dawa’s input, the weather forecaster, and conversations with other expedition leaders. He knew if he made the wrong decision, it could mean lives. But he also felt the pressure to get all of his team on the summit and back safely. However, as he once told a client, “You pay me to get you home alive, the summit is optional.”

“The forecast has two primary scenarios. First, the current track has it sliding to the east, sending out bands of winds but predicted to be under our limit of 30 mph. The second scenario calls for it to veer east and we get a direct hit of 45 to 70 mph winds and maybe two to three feet of snow. If we are at the summit push or even at the South Col, we are in deep trouble.”

Guide added, “Last year, 2019, Cyclone Fani did precisely that – a direct hit. The Tibet side got slammed the worst. Thankfully no lives were lost. Luckily it happened in early May. But for us, we are now nearing the end of the season.”

Loner stood up. His anxiety was getting the better of him, but he knew he had to listen carefully. After all, as he told Guide, this was not a summit at all cost trip for him, even though he wanted the summit badly. He was also bothered that now, well over 300 to 400 people had summited.

Guide, glancing over at Loner, continued, “In either case, we are in for winds over the next couple of days, similar to that we experienced at C3 on our last rotation. If it continues to move at the current speed, the big winds and snow would hit on the 21st, when we are descending to Camp 2. Oh, and one more thing to consider, there is a small window on the 23rd.”

Buddy spoke up, “So what’s the plan? Do we hold here for another day for an updated forecast? Do we head to 3, hoping this thing misses us? Do we get to the Col and wait it out there?”

“Well, you pretty well summed up the options. Except you left one out.” Guide replied. “We can go back to base camp and wait for the next window – if it comes. We would descend tomorrow, it’s too late now to go through the Icefall, you remember what happened last time. We would spend one or two nights there, then come directly back here and to C3 the next day, no rest day, then push for the summit on May 24. It would be brutal physically.”

The options were overwhelming for the team. She started to see her Everest dream slip away. Boyfriend’s fears, amplified. Dutch was holding back, trying to control his urge to yell out, “I don’t care what the forecasters say. They are always wrong. I say, let’s go!”

This is a real-world interview I did with Michael Fagin of everestweather.com on Saturday, May 16. He used the same real-world live data he does each season to advise many commercial teams on the world’s highest peaks.