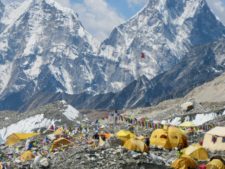 The Mount Everest Guides’ members are resting in Everest Base Camp on the Nepal side. Meanwhile on the Tibet side, they hope to get the ropes to the summit this week. Passing the time during this period is always challenging as our fictional members are finding out.

In the real world, the Tibetan rope fixing team is planning to summit on May 12 opening the route for over 30 Chinese.

Summit Fever in Base Camp

The time spent at base camp between the final rotation and the summit bid is probably one of most testing periods throughout an entire expedition.

“What’s the forecast say?” Dutch asked Guide. “Even though the team had only spent a couple of days at base camp, some were already restless. “Doesn’t matter right now because we need at least a week of rest before we even think about going up. We’ve got plenty of time.” Dutch looked unhappy. “Also, we might have a couple of people go down valley for a few days, and I want to give them that option,” Guide added

“I hear several other teams are leaving tomorrow for their push.” Dutch pushed back.

As more of the members gathered around, Guide thought this was an excellent opportunity to review the strategy.

He began, “First, to state the obvious, when winds are gusting over 30 mph, the risk of frostbite dramatically increases – even wearing the world’s finest down suits. Fingers and toes get numb; you will struggle to breathe and even move; visibility becomes limited with blowing snow. In other words, it’s miserable and life-threatening.”

Guide wanted to help his members understand the dynamics of the climbers on Everest, “There are about 41 teams on Everest this spring ranging from two people to 100. Almost without exception, all depend on Sherpas to establish camps, including ferrying food, fuel, tents, and supplemental oxygen.

While we may read about someone climbing “self-supported” in reality, they are supported by the Icefall Doctors to set ropes and ladders in the Khumbu Icefall or to Advanced Base Camp on the North. Also, they get support from the commercial teams or the Tibetans who set the safety line to the summit. If they clip into someone else’s rope or step on a ladder, they are supported.

And some “independent” climbers depend on Sherpas to establish their camps just like the commercial teams. I don’t mean to criticize, but rather to clarify and to frame the environment.” Guide smiled, knowing he had a larger agenda, “Well, maybe I’m slightly criticizing them for their lack of transparency and acknowledgment of the support they use.”

Guide had grown weary over the years of returning home from Everest and reading in some adventure magazine about a person who “summited Everest, alone and unsupported.” The last time that really happened was on 20 August 1980 by Reinhold Messner on the Tibet side.

Today, there were too many inexperienced people on Everest that slowed other climbers and often took resources away for rescues. Guide was done pandering to their misplaced egos.

Guide went on, “As I’ve said before, there are at least three major milestones before we can even think of going on our summit bid: First, the route has to be fixed to the summit, and that’s done. Second is we need to be fully acclimatized and rested, no shortcuts on this one even though we’ll be on Os. I’m not ready to say everyone is ready for the push.” Once again he prompted a quick look around the tent.

“And third, we need a weather forecast of four to seven days with winds under 30 mph.”

The weather forecast was the primary factor that drives the crowds. If there are only a few good weather days, everyone elbows to get their spot in line. The normal range is 6 to 16 days, with an average of 11 each spring season since 2001. In 2019, the year most talked about for crowds, and it went down to four, and there were unimaginable lines above the South Summit.

He picked back up, “The best-case scenario for 2020 is to have many good weather days that spread out the crowds. We have a lot of people on this side this year, and if the windows narrow to a few, then we can expect record deaths, record frostbite while seeing record summits – a harsh scenario.”

She spoke up, “We talked about all this last week, and the 19th seemed to be the best, but you said you wanted to wait and be one of the last teams going up. Has anything changed?”

“No, not significantly. We have a few members who, in my judgment, need more rest.” Guide said.

Dutch saw his opportunity, “So, let’s have two waves, the ones who are ready, the ones who need more time.” He looked around the tent hoping for unanimous agreement. Everyone kept their eyes on Guide or the floor.

“I’m not ruling that out, but a lot depends on how crowded the mountain is, and how every one of you is performing. You are paying me to get you home alive with all your fingers and toes, not to summit.” Loner’s head pivoted up. He looked Guide directly in the eye. He started to talk but abruptly stopped. Guide noticed.

Everyone shifted in their chairs, feeling the conflict. Guide decided he had said enough about strategy, for now, and shifted the subject.

“There is a situation developing on the Nepal side. The Everest area has not had the same amount of snowfall over the preceding winter that it usually experiences even though we are hearing, that the Tibet side is getting slammed right now.

Anyway, snow is what holds the loose rocks together and prevents them from falling down the steep slopes. As you experienced last week, the route above C2, starting at the Lhotse Face, becomes very steep with angles from 20 to 45 degrees. When a rock starts rolling, even a tiny one, it becomes a missile. While we will always wear helmets, you can still be hurt or killed depending on where a rock hits you and how large it is.

At this point, there have been numerous reports of Sherpas, no foreigners yet, becoming casualties of rockfall. There are reports of broken arms and head lacerations requiring ten stitches. This is a dangerous environment that can only be remedied by a heavy snowfall – even then, it may not be enough to salvage the season if the high winds return as we experienced at C3.”

Now everyone felt concerned. “Did he just tell us we may end the season without a summit try?” Old Man whispered to Loner.

“Now, I’m not saying we are ready to give up. Not by a long shot. But you need to understand that this is a complex environment. It only takes a few things to go wrong to put us all in danger. As you know, safety is our top priority.”

Loner walked out of the tent.

12 Responses to “Virtual Everest 2020: Summit Fever in Base Camp”