The fictional Everest team, now at C2 on their summit push, received an updated weather report on Cyclone Amphan. Guide and Dawa gave the team the news over dinner.  Also, a real-world interview I did with Jagged Globe’s Managing Director, Simon Lowe on Monday, May 18. We discuss the Everest closure, the Pandemic, and the 1996 Everest tragedy.

In the real-world, the massive Chinese teams are hoping to summit on Friday, May 22, assuming the real-world cyclone, Amphan, doesn’t turn west and hit Everest.

Old Man and Pamba arrived at Camp 2, joining the rest of the team. Snorer caught him up on what was going on. “Well, I’ve got bad news, worse news, and horrible news.” He went through the three options Guide laid out to deal with Cyclone Amphan.

Old Man looked shocked, “He wants us to go back to base camp, then come back up to C2 in a couple of days? I can’t do that. I guess I’m out.” About that time, Boyfriend walked by to welcome Old Man. “Yeah, I had the same thought. I don’t know if I have enough gas in my tank to get to the summit. I know I can’t go back to base now, then all the way back up, and summit. I’m out too.” Old Man found a modicum of comfort that Boyfriend, half his age, was also struggling.

“It’s just one of three options. If the cyclone veers east, then we are in the clear. Maybe we should ask Dawa for another puja!” Snorer said, trying to lighten the mood. 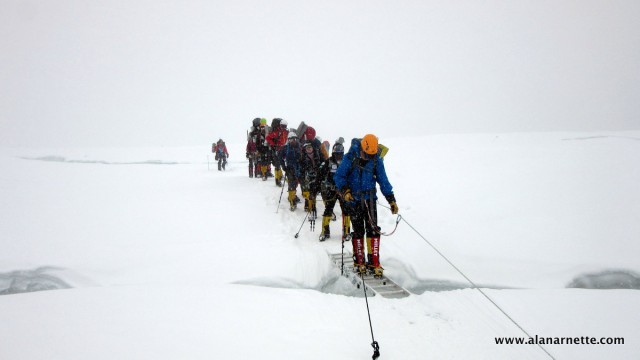 The team milled around C2 for the afternoon, hoping for a new weather update over dinner. She grabbed her Thuraya sat phone out of her pack and walked towards the steep icy hillside that leads to the West Ridge. “We might not go.” She began the short conversation with her husband. She knew from other expeditions that those at home had no way of tracking their progress in real-time, so she tried to keep them updated on significant events. “When will you know?” He asked her. “Maybe later today or tomorrow. I’ll send an SMS when I know. I want to save the batteries for the South Col and the summit – that is, if we get there,” She knew it was now harder on her family than on her. Also that She knew what was going on; they had to wait, to guess, not knowing what they didn’t know.

The team slowly came to the dining tent, hoping for the best but prepared for the worst. No one wanted to go down, not even Guide and Dawa. But if Amphan was going to hit Everest with 70 mph winds and 2-feet of snow, it was the only real option.

They all sat on the three-legged golf chairs around the small dining table. Dutch kept falling over, giving everyone a moment of comic relief. He was doing it on purpose. Loner just stared at the door waiting for Guide. Everyone was making small talk about families, hopes, and fears when he walked in with Dawa.

“The updated forecast has Amphan moving east. Everest is out of the cone of uncertainty.” Guide said. “That’s fantastic! So, Dawa, why the maybe?” Dutch probed. Dawa sat down, sipping hot Sherpa Tea, “It’s a forecast, and I still have memories of the same thing with Fani last year. It went east then came back west. We are not clear yet.”

“Fagin sent me this low res image of the track, I’ve got it on my phone.” Everyone gathered around Guide as he turned on his phone. It was amazing that he got a signal at Camp 2. It was weak, and he had to walk around the Western Cwm using his phone like a divining rod looking for water, but in this case, it was an NCELL signal.

They looked at the map and quickly saw the track moving away from Nepal and that Everest was no longer in the cone. “I like this.” Old Man said, putting his hand on Boyfriend’s shoulder. Girlfriend put her’s around his waist.

“So, what’s the plan now?” Bud asked. Guide addressed the group, “Let’s move to C3 tomorrow. Out the door at 3 am to the Lhotse Face and up. It’s going to be cold, between -10F and -20F, with winds expected to gust to 45 mph. The wind chill will be brutal. Wear your down suit, goggles, mittens, the works.” 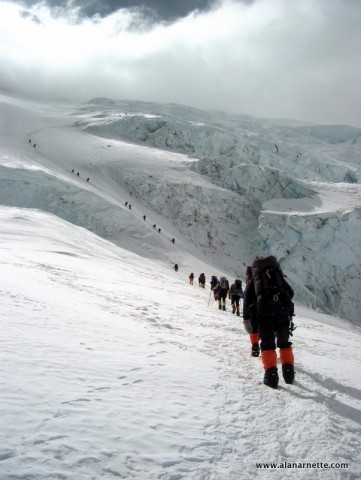 “I was liking this plan, but are we moving up too early?” She asked. Guide responded, “No, the forecast calls for the winds to dip under 25 mph with a mean speed of only 3 – basically calm – on the morning of the 21st. Then it picks back up.”

Dawa took back over, “Remember, the winds could return, or the cyclone could still veer back to us. I’ve been guiding on Everest for 20 years, and nothing is certain.”

“Sounds like we have a window.” Loner said, reaching for more vegetables.

This is a real-world interview I did with Simon Lowe of Jagged Globe on Monday, May 18. He is the Managing Director of JG and lead one of their first Everest expeditions in 1996. We discuss today’s Everest closure, the Pandemic, and the 1996 tragedy, partly due to the weather.