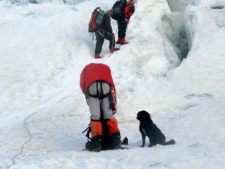 When the time comes to leave base camp for the summit push, emotions become explosive and scattered. Our fictional team gets ready to leave and the weather forecast is iffy, at best.

“It’s time. He told us today. We leave for the summit tomorrow.” She told her husband. She bought another gigabyte of data from EverestLink so she could do a FaceTime call with him. “How do you feel?” he replied. “Good, real good. Rested, and recovered from our last rotation. I’ve been sleeping great down here and eating everything they put in front of me.” She was confident and ready to get going. Sitting around base camp, even with the occasional hike to Pumori or Gorak Shep, was getting old. The conversation around the dining table was also getting old. It was time.

“Listen up, everyone. We leave tomorrow, Sunday, May 17 for our summit push. We go directly to C2 for two nights, then 3 for one then to the Col hoping to summit around dawn on May 21 and back here on Saturday the 23rd. There’s a storm brewing in the Bay of Bengal so we may dodge it, get slammed by it, or get to C2 – or even the South Col – and wait a bit. Overall, this is not the best plan, not the one I wanted, but it looks like the monsoon will start early, and I want to give this a shot and get out of here.” Loner looked at Guide as he spoke, listening to every word as was Old Man. It was not the news either wanted to hear. 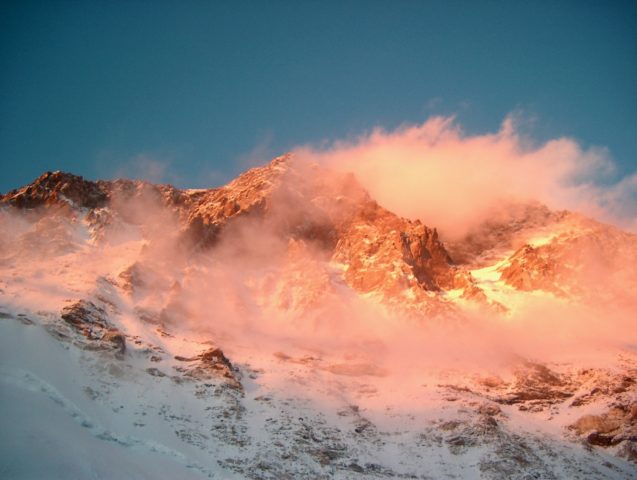 Climbing mountains, especially the 8000ers, is always a gamble with the weather. It can change suddenly, winds can develop seemingly out of nowhere, but especially on Everest storms seem to develop quickly, like the one in 1996. Technology has vastly improved, especially satellite imagery, so predicting the movement and impact of cyclones off the Indian coast is more reliable but still not foolproof. Last year Cyclone Fani was unusual. It occured in early May, not the usual June, and it came fast and hit hard, destroying a lot of tents, especially on the Tibet side.

“Put the kids on.” She asked her husband. “Hi darlings, I love you. This is the last time we will see each other before I come back to base camp next Saturday. But I’ll call from the South Col. You remember where that is, right? I showed you on the map before I left home.” She was almost choking on her words. “Mom, please be careful. Come home to us.” Her daughter said, staring directly into the iPhone. Her eyes glistening with emerging tears.

“Honey, can you put mom on?” Just a second, he said walking towards her bedroom. “Mom, it’s me, your daughter.” She said gently. “Why hello there. Where are you?” Mom said, not looking into the phone but at a picture on the wall. They spoke for a few minutes before She said her goodbyes to everyone. Back in her tent, She sat cross-legged, tears rolling down her cheeks. 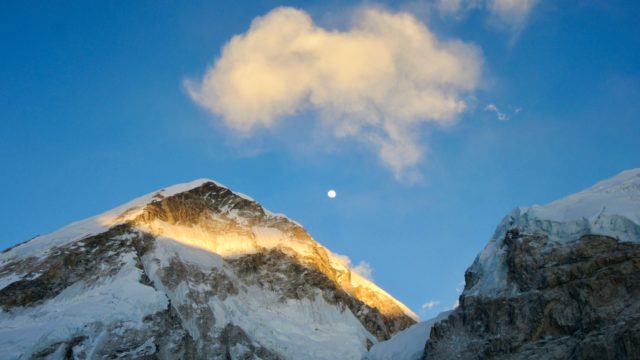 Everyone started to wander out of the dining tent, speaking in muffled tones. Guide, still sitting in his chair spoke again, “Can you stay for a minute?” he said to Old Man. “I’ve been thinking about your situation.” Old Man’s heart rate increased; his palms became sweaty. Was this the moment when he tells him that his climb is over? Part of him hoped it was, but a bigger part desperately wanted his chance.

“Let’s review where we stand. You made it to C3 under the nine-hour time limit I set, but just barely. Back here, you’ve been resting but not as active as I would have liked to have seen. Pamba said you were a bit slow going up Pumori, but still OK. So, I think you have a chance, but I want to do a few things differently for you.” Old Man was frozen in his chair, holding his coffee cup tightly.

“First, I want you and Pamba to stop at C1 tomorrow, while the rest go to C2. Second, I want you to start using O’s when we leave C2, unlike everyone else who will go on Os leaving C3. ” Guide began laying out the plan.

“Are there enough Os?” Old Man asked, “Yes, we plan for something like this and always have enough. In fact, I want you to go at 4 liter-per-minute all the way from 2 to the summit and back. Finally, you and Pamba will leave two hours earlier from the Col than the rest of the team. This way, you can go at a slow, but safe pace. I talked it over with Dawa and he suggested assigning you a second Sherpa. We are not sure who yet, but he will carry extra oxygen just in case.” Guide leaned back in his chair. He had been leaning over, hands on his knees, making eye contact with Old Man. Finished with his delivery, he waited for the reaction.

“Well, I’m not sure what to say, other than thank you. That’s a generous plan. I’ll have to swallow some pride to start using Os that low, but running at four lpm will give me an edge. Also, I like staying at Camp One tomorrow night. Last year, I arrived at C3 exhausted, out of gas. I came back down the next day. I knew I could not even make it the Col.” Old Man smiled, exposing a toothy grin as he stood up and extended his hand. They shook hands and walked out of the large dining tent together. “Oh, and one last thing,” Guide said, “I believe in you. You need to believe in you. But if I think you are in danger, I will pull the plug. No discussion, just turn back. I need your word on that.” 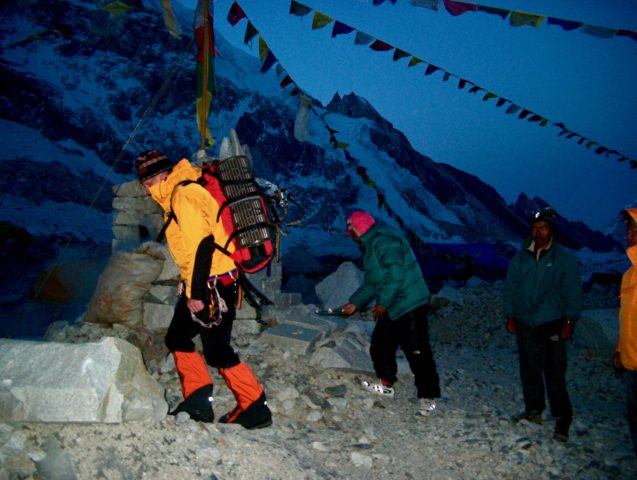 Everyone spent the afternoon organizing their gear. They already had their down suits, oxygen masks, and regulator at C2. They always had more layers in their packs for each rotation; a big down jacket, Gortex hardshell, and mittens. They checked their harness and runners, and that their cows-tail was properly rigged. They had already used their technical gear so this more of a formality, however, it helped pass the time.

Bud pulled a file out of his duffle bag. “Need to put an edge on these,” he said to Buddy as they sat outside their tents on the large rock. He carefully turned his crampons over and began filing the tips. Having purchase on the icy Lhotse Face, and Geneva Spur was important, but he was concerned about the southeast ridge proper, between the Balcony and the South Summit. That stretch was known to be steep at times and have rocks instead of snow. They had heard from people who had summitted that the conditions were difficult this year.

The dinner conversation had a different feeling than in the past few days. Girlfriend looked at Dutch, who was deep in thought. “Do you think you’ll summit?” she asked him, more to make conversation that a real question. “Dutch took another bite of Dal Bhat. He reached around to the back of his head, tugging on his blond ponytail. “Yes. Yes, I’ll summit, and so will you. We all will!”