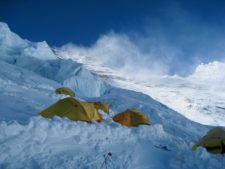 Our 2020 Virtual Everest team, hoping a tiny weather window is real, is on their summit push. They made it to Camp 3 on the Lhotse Face in horrible conditions. High winds and numbing wind chills made them work for it. One of the team suffers.

The wind and temperature forecast was spot-on as they left Camp 2 for Camp 3. It was cold, very cold. The still air temperature was -20 Fahrenheit. It was windy, very windy, Gusting to over 45 mph but most of the time a steady 20. That made the windchill a mind-numbing -48F. They were operating at the very edge of human physical tolerance.

“What are we doing?” Dutch asked himself. He was already cold even with two base layers under his down-filled one-piece suit. He bought a new one before coming to Nepal and went for the best. He spent $1,200 on the covering. “So why am I so cold?”

He continued the conversation with himself as he made his way across the relatively flat section of the upper Western Cwm above C2.

He was in the middle of the Mount Everest Guide’s team. There were nine members, each with a Personal Sherpa. Also, there were five Climbing Sherpas, including one assigned to Old Man, to carry his extra oxygen, the rest to help in case of an emergency. Guide was bringing up the rear, there to assist anyone who needed it. Climbing Sherpas were in the lead. 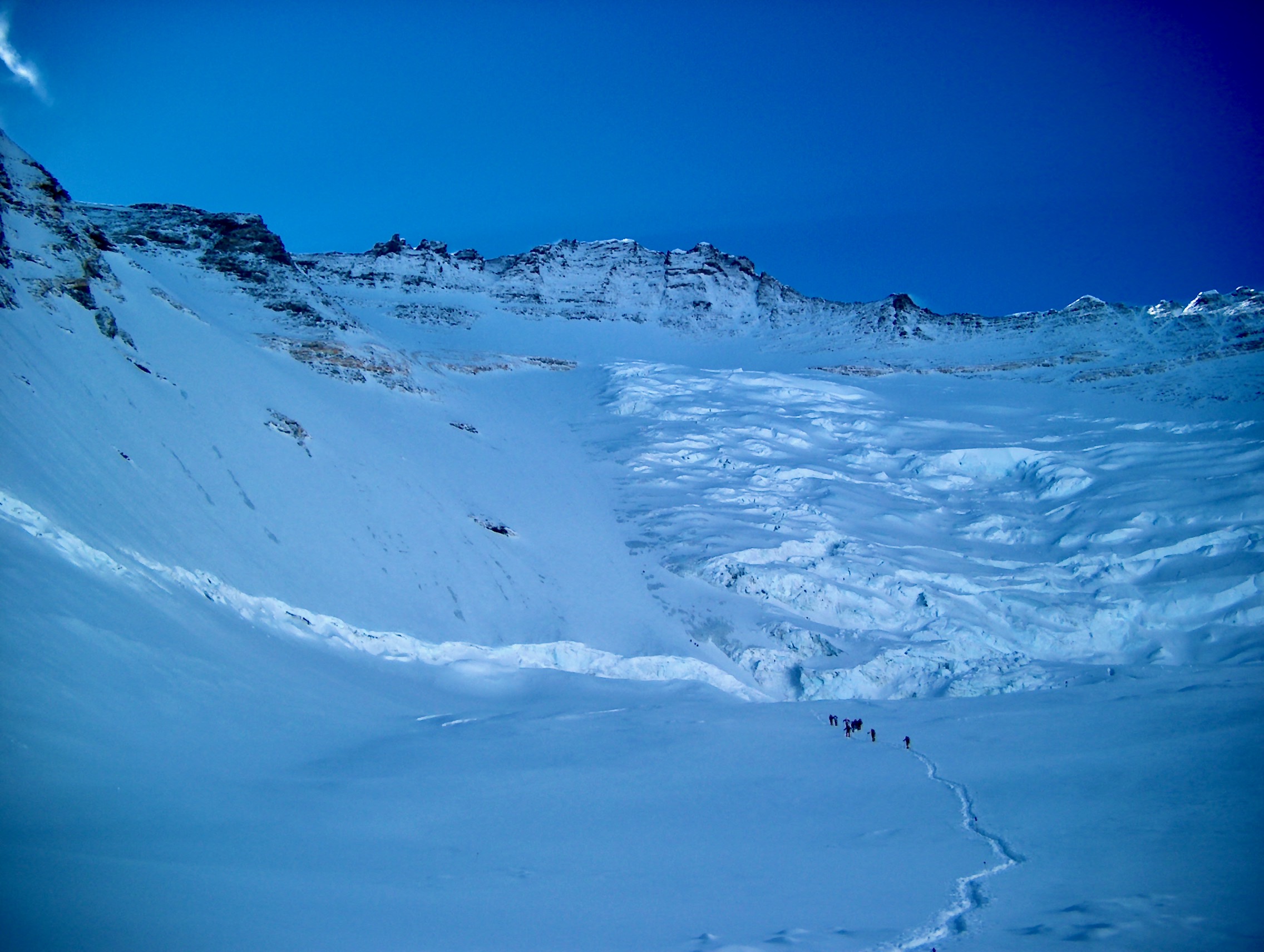 For the first time on the expedition, the team made good progress in challenging conditions. Their collective 25 headlamps lit the well-defined boot path. They could see lines of lights already on the Lhotse Face. It appeared several other teams felt it was worth rolling the dice, trying to nab this tiny weather window. Technically, the season had 11 days left. On June 1, the Icefall Doctors would remove the ladders in the Icefall, closing the season on the Nepal side. Tibet would go into June giving measurement team more latitude.

She moved in lock-step behind Mingma, who led the train. He set a steady but swift pace, knowing that in these conditions, speed is your friend and keeps you warm. Dutch was feeling better. His steady movement was warming his body. Buddies were doing well, as was Loner and Snorer. Couple and Old Man were at the end of the line. They were losing ground to the rest of the team.

This was a difficult day. Last night Guide told the team, “Tomorrow will be the toughest day we’ve had yet, given the conditions. But it will pale in comparison to summit day. Climbing Everest is all about altitude. The section between the Balcony and South Summit may be a bit easier with fresh snow, but that area is steep and has exposed rocks. It starts at 27,500 and ends at the South Summit at 28,700.”

Old Man, now using supplemental oxygen at four liters-per-minute, was in a steady, but slow pace just as Guide had told him. Pamba was a step or two in front, continually looking back to check on him. Old Man began to think about his experience last year when he went to C3 without Os. This time felt easier, but he also knew the hardest part was when he would see the first tents at Lower C3 and knew he had another hour, or more, to reach his tent at Upper C3. Mount Everest Guides placed their tents 500-feet higher than the lowest ones. 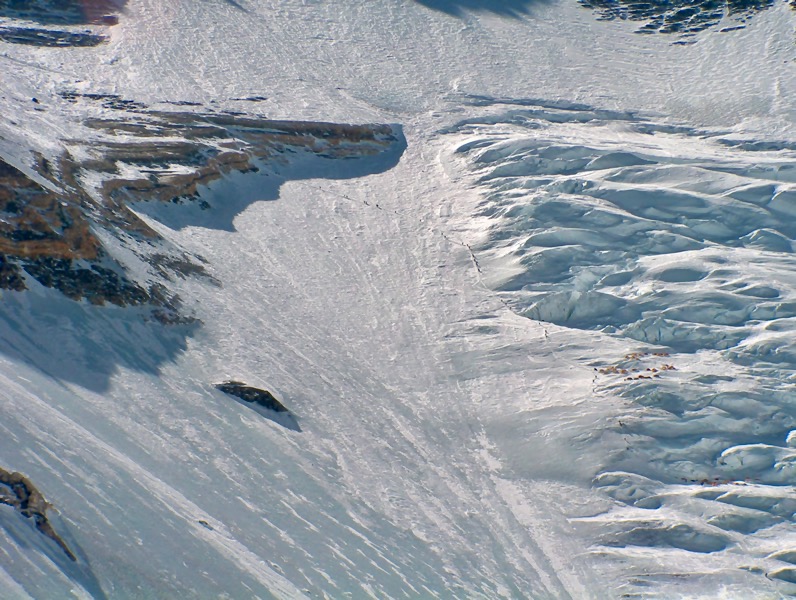 The team reached the base of the Lhotse Face and the large bergshrund. She paused before stepping on the ladder; everyone used it to overcome the gap. She knew from studying the history of Everest the large icy hole was the grave for, at least, two people. In 2002, a British climber slipped midway on the Face descending in a fierce storm. He fell to his death into the bergshrund. A Sherpa had a similar fate in 1997. “Stay clipped in. Stay clipped in.” She lectured herself. Mingma, already across the ladder, paused. “Didi?” He said gently. “I’m OK.” She replied as she crossed the ladder and clipped into the fixed rope.

The high winds had scoured the Face of any fresh snow. It was hard-packed ice. Loner struggled to get purchase with his crampons. Silently, he cursed himself for not putting a sharper edge on his crampons. He began to sidestep more than any other footwork technique to gain elevation. He was more successful now, having all 10 of his points making full contact with the snow.

Each step on the icy Face required focus. Even with the hundreds of summits and the previous traffic, the steps they counted on were shallow and widely spaced apart. The fixed-line used to ascend felt loose, suffering from thousands of pulls over the past few weeks. “Climb with your legs, no jugging.” Snorer reminded himself as he took the pressure off his jumar attached to the line.

The angle of the Face suddenly increased. Buddies, now climbing together, talked about this section after the C3 rotation. “Where did that come from?” Buddy asked Bud when they got back to Base Camp. Laughing, Bud said, “I don’t know, but when we go up for the summit push, I’m going to ‘pied en canard’ it!” Buddy threw his head back, howling, “Ah, the old ‘Duck Foot’ technique. Very good.” Now that they were back, Bud turned back to Buddy and shouted, “Quack, quack!” as he pointed both feet outward, splayed at a 90-degree angle. 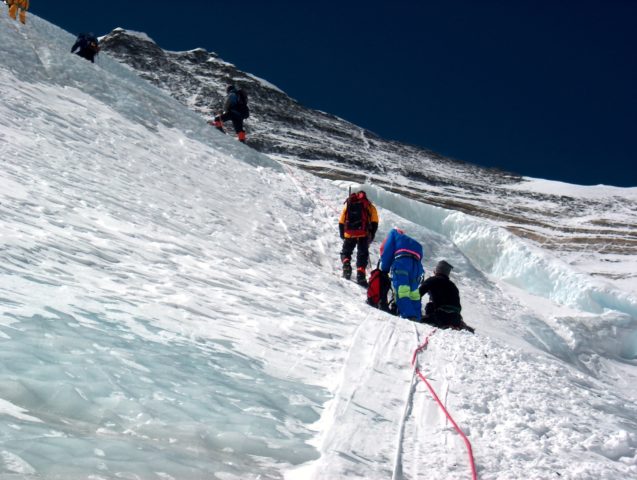 The sun peaked out as it rose above Lhotse. They had been moving for five hours, making faster time than on the first rotation. Even Old Man was going quicker, a point not lost on Pamba, Dawa, and Guide.

Boyfriend began to feel the altitude when he reached the middle of the Camp 3 sites. “Are you OK?” Girlfriend asked. The steep angles, cold temps, and howling wind gusts had conspired to sap his dwindling strength. He was losing both the physical and mental game of climbing Everest.

“I’m tired. I can’t do this.” He said, leaning over, hands on his knees, gasping for air. Girlfriend had a serious decision to make. Did she try to encourage him as she did on Aconcagua when he hit the wall at Camp 2 at 19,000-feet? There he went on to summit the 22,834-foot peak. Now he was at 23,000-feet. Every step higher would be a personal altitude record. He had been struggling all trip, and her words had kept him positive. He tended to go to the dark side and become pessimistic and negative. On Denali, he gave up at the High Camp. Nothing she said could get him higher. 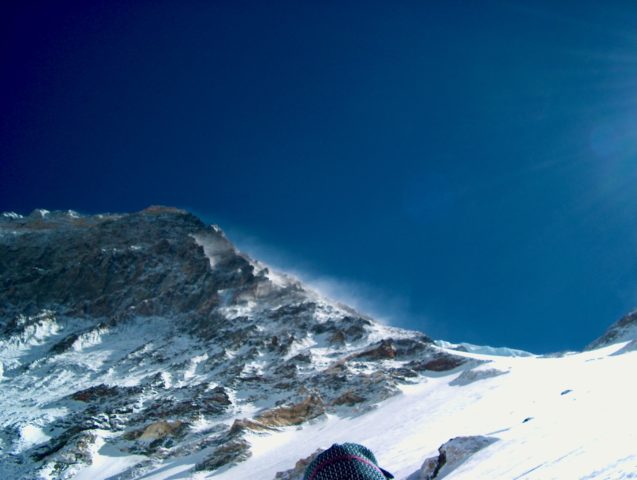 Guide caught up with them. “Out of gas? We’re close to our camp.” Guide shouted so they could hear him over the roar of the wind. “Yeah, not sure what’s wrong. No energy. I’m really hurting.” Boyfriend shouted back. Passang, his Personal Sherpa, put his palm over his mouth and nose, looking at Guide. Maybe putting him on O’s would get him to C3. It was only 500-feet away, about an hour and a half at his speed.

Guide took over. “Look, you are close to C3. With this wind, it might be safer to get there and evaluate the next step rather than going back to 2.” Girlfriend nodded.

Passang smiled at Boyfriend as he nodded back and did a thumbs-up signal. “But, let’s put you on O’s.” Guide said as Passang pulled a bottle, regulator, and mask out of his pack. They had anticipated this might happen to him and were prepared.

Boyfriend saw the bottle and let his chin touch his chest. He felt defeated, embarrassed as if he didn’t belong there. He heard the voices of people back home when they would return, asking “So, did you use oxygen or climb Everest like a real climber?”

He avoided eye contact with anyone, especially Girlfriend. She gently reached over touching his covered head with her mitten. “I love you no matter what.”